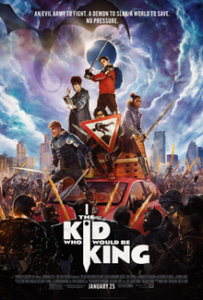 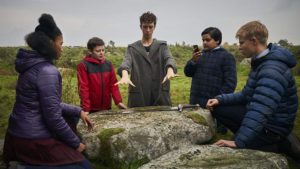 It’s The Goonies meets Lord of the Rings with this  fantasy adventure about kids living a modern day King Arthur story, and the result is entertaining, exciting, and fun.

A fun and thrilling adventure that actually features kids as our heroes. This one goes back to a simpler time when movies like The Goonies and E.T. were able to pull that sort of thing off and have it taken seriously. The movie does it by using Lord of the Rings style folklore and creatures and putting our kids on a mission that keeps evolving, as does the relationships they have with each other. This one is smart and exciting all the way through. It is a little long, but everything in here is necessary and contributes nicely to the story. This one is better than one would expect, and really works out well.

The Kid Who Would Be King is a pretty excellent movie. This is a medieval adventure set in modern times. It’s a take on the King Arthur legend unlike any we’ve seen before, and that’s really telling considering this story has been told and retold almost as much as Robin Hood. The last take on King Arthur (Guy Ritchie’s version,) was awful. The last take on Robin Hood, starring Taron Edgerton and Jamie Foxx, was awful. In fact, most takes on those two stories from the past twenty years have been awful. The last time they got them right was in the nineties (Costner’s Robin Hood and Sean Connerey’s First Knight.) But now, for the first time in a long time, The Kid Who Would Be King finds a way to approach the subject that is unlike any other.

That way involves kids. High-school age kids. And it involves a modern story, set in our current time. It also involves a style that crosses movies like The Goonies and the Lord of the Rings together. The movie was made by Joe Cornish, who has only directed one movie before. Attack the Block. From about a decade ago. He’s taken that long to make a second film. Which means either he’s a perfectionist or he’s got some issues. Based on how good The Kid Who Would Be King is, I’d say it’s the former. This guy knows what he’s doing, and he knows how to take his time doing it. Attack the Block was a fantastic action movie that put kids against aliens in the hood. Sounds like a dumb comedy, but in the hands of Cornish, he got us to care about these kids and get excited about the action and thrills.  That movie launched John Boyega’s career, playing the gang leader, Moses. With King, it’s uncertain if any careers will be launched just yet, but there’s certainly a lot of potential.

Like Attack the Block, this movie takes what could easily be seen as a ridiculous plot, and gets us to care about it. The idea here is that a boy named Alex (Louis Ashbourne Serkis,) is just a nerdy kid at school who sticks up for his pudgy friend, Bedders, when he comes across Bedders getting bullied behind the school. The bullies end up fighting with Alex, and all three of them, (Lance and Kaye, the two bullies, and Alex,) get detention. When detention ends, it is already dark outside, and the bullies chase Slex down.

This chase takes Alex into an abandoned construction site, where he comes across a sword, sticking out of a large block of stone. And of course, he picks it up. Now this is where the movie starts to get a little Lord of The Ringsy… we travel underground through vast open areas lit by fire, and follow tree vines, while listening to the voice over of an evil sounding woman speaking about how something has been awoken. And the camera keeps moving until eventually we come to the villain, (this woman, Morgana, played by Rebecca Ferguson,) basically growing out of or on a tree.

The next day at school, a new kid is introduced to the class. This is Mertin, a boy who takes himself way too seriously, and clearly doesn’t care what anyone has to say about him. In the cafeteria, Alex finds Mertin standing behind him, just staring. When Alex and Bedders get up and walk to another table, Mertin follows them. He stands on a table and makes a speech about how Alex is the chosen one. Alex and Bedders leave, and they miss seeing all the kids throw food at Mertin, and Mertin turn into an owl and fly off.

That night, Alex gets a visit by an evil spirit. This creature looks like a skeleton with flames burning inside of it. The skeleton rises from the ground, outside of Alex’s window. He looks for his mom, but she is nowhere to be found. And the skeleton breaks into Alex’s house and climbs up the stairs, coming to get him. Luckily Mertin shows up and saves the day. And now, Alex is ready to start listening to this kid. He tells Alex about a fast food chicken joint to find him at and the next day, Alex and Bedders do exactly that. They take Mertin to Alex’s house, where he turns into an old man (Patrick Stewart,) to show what he really looks like. And he tells them everything they need to know, including that he needs to make friends of his enemies. Mertin also explains why Alex’s mother disappeared that night. Anyone who hasn’t been knighted will disappear are nightfall, when the creatures arise.

And so Alex and Bedders approach the bullies, leading them on a chase to the construction site where Alex pulled the sword from the stone. Alex expects that seeing him pull the sword, when nobody else is able to, will be enough to convince the bullies to follow him. It’s not. But at least they let him knight them. Which means when the spirits arise, (this time about four or five of them, on horseback,) it’s not just Alex this time, but Alex, Bedders, Lance, and Kaye, all running from these creatures together. They steal a car and lead the creatures on a chase through the streets of London. And what’s fantastic is the way these creatures explode into fiery sparks when they are killed. Not since Blade 2 has the effect of what happens to creatures when they die, looked so cool.

From the very first time that a Mertin explained things to Alex, he told the boy of the upcoming eclipse, in three nights, and how Alex must find the entrance to the underground and destroy Morgana before this happens. The three night countdown is pretty cool. It helps us keep track of which night it is, and know that something is coming down the line for the climax. With time closing in, Alex has an idea of how to find the entrance. His absent father left him the King Arthur book, with an inscription about how Alex is the once and future king. Alex takes this to mean that his father holds the key to all the answers, and so he gets the others to accompany him on a journey to the outskirts of the country, to find his father. Once there, the movie gets pretty deep in some unexpected ways. And it all leads them further along on their quest.

There’s a lot going on in this movie, including characters who start out enemies and end up being friends. Now that’s a common trope of lots of movies, going all the way back to romantic comedies, where the characters gradually fall for each other during the course of the film. But here, the bullies stay bullies for more then half of the movie. Even after battling skeleton demons alongside Alex, they stay enemies with him and non-believers of the once and future king theory. Even after traveling with Alex to the outskirts, and battling an army of monstrous trees, they still don’t believe. This idea, that it’s tough for people to change their ways, and that sometimes it takes a lot more than you might expect, is pretty cool.

This movie is definitely long, but it has so much packed in there that you don’t really feel it. For example, there are two climaxes of sorts. Some might have a problem with that, but the truth is that the first climax, down in the tunnels beneath the earth, is underwhelming. If that were the only climax, it would be a problem, but the true ending, or battle in the school is fantastic, and easily makes up for it. In fact, it makes they earlier climax kind of cool, knowing that it is just the buildup to something bigger and better. If there’s anything to not like about this movie, maybe it’s the way that the climax takes us out of adventure and explorer territory and into a school. It reduces this movie to a simple… back to where we started, situation. Imagine if the Hobbits returned to the Shire at the end of the Lord of the Rings movies, and that’s where the final battle took place. But what they do with a school setting in this movie turns out to be both clever and a lot of fun. And so it works. This movie is surprisingly pretty fantastic.