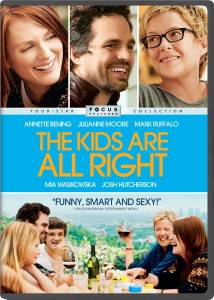 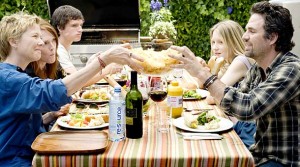 An okay drama, where kids go searching for their sperm donor, find him, and he ends up stirring up a whole mess.

The Kids Are Alright is an enjoyable movie about two women lovers with two kids that they have raised since birth. And that birth was orchestrated by an anonymous donor. And the movie is about the two kids finding the donor and about what ensues after that.

On the surface it seems like something we’ve seen before. Not the lesbian part, but the story of kids looking for their long lost parents. Ussually it’s an adopted kid. But this movie strives to be different and creative. And so it spends a good deal of time with the two women and explores their relationship a bit, knowing full well that we haven’t seen two many movies where a lesbian couple is the key component of the film.

The women are played by julianne moore and annette benning, two very strong actresses. Moore is the one who has made a career out of finding top notch roles and giving dynamite performances. For Benning on the other hand, this movie is a welcome back to greatness. She achieved it in American Beauty over ten years ago and now she’s back. Of the two, benning is the one whos performance is getting all the buzz, and that’s well-deserved.

But the movie really starts to get good once mark ruffalo comes on the screen as the donor who is okay with his kids seeking him out. I appreciated that this movie wasn’t a whole big mission kind of thing about finding the father. That the kids didn’t have to jump through hoops or go from place to place before finding him. A lesser movie would have done that, thinking that they could get through a whole act of the movie on just the plotline.

This movie knows it’s heart is with the adult actors, not the kids, and so it spends as much time with moore and benning as possible, and when not with them, it’s ussually with ruffalo. He’s one of those actors that is just fun to watch. He’s a completely laid back kind of guy, just enjoying the ride of stardom, and the character he plays in this movie is probably not all that far off from the real mark ruffalo. I loved him in You can count on me, at the start of his career, and then again earlier this year in shutter island. The kids are alright marks his second good movie in one year.

When ruffalo is invited over for a meal and meets the women whose spawn he fathered, socializing turns into business as Moore is hired to design his backyard. From there, the movie turns into an affair film, which we have seen before, only benning handles it like it’s the first time this kind of plot has ever been on film.

The most compelling part of the whole affair is mark ruffalo’s character. He’s not a guy who will just do whatever he wants without thinking about it. If he was, then he wouldn’t so easilyd dismiss his girlfriend. Instead, he’s a guy who wants a family, but doesn’t want to spend the time making it himself. He sees an easy solution in front of him and he goes for it. He’s not a sympathetic character, but understanding him and where he’s coming from gives this movie that extra edge.

The movie is not fantastic, but it is pretty good. There are certainly plotlines and strands that feel familiar, either the searching for the father or the affair. But we haven’t seen it with a lesbian couple before and this movie shows us how that really does make a difference. We also haven’t seen a character like ruffalos before, determined, yet misguided. It’s an enjoyable film.