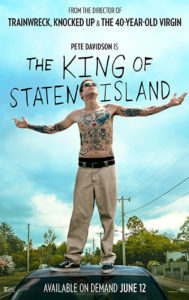 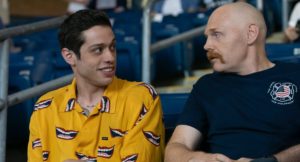 Not especially funny and a little too long, this movie is still entertaining and interesting, and probably the best of the “mature,” Judd Apatow movies.

Not a bad movie, this one isn’t especially funny, but it’s still kind of interesting. For one thing, it tells a story pretty close to star Pete Davidson’s own, with him growing up in Staten Island, dealing with the memory of his father who died on the job as a fireman, and smoking a lot of pot. And this story includes Davidson’s character, Scott, spending time with his group of friends in the first half and then with a group of firemen in the second half. Judd Apatow movies often tend to go in that direction, trading up the immature lifestyle for the more mature one as the movie goes on (The Forty Year Old Virgin, Knocked Up.) This movie isn’t on the same level as any of those, because it doesn’t have the humor. Davidson might be talented, but he’s surrounded by either unknown actors or ones who are already established, (whereas those other two movies were filled with up and comers.) The movie is a little too long, but it is far superior to some of Apatow’s other humorless films, Funny People and This is Forty.

Judd Apatow movies come in two categories. Funny and Not Funny. The Not Funny movies tend to be his mature movies… Funny People (about a guy getting cancer,) This is Forty (about people getting older,) and now this film, about a guy dealing with what has become of his somewhat pathetic life. The funny movies include The Forty Year Old Virgin, Knocked Up, and Trainwreck. The three of those films are comedy classics. They’re the reason why Apatow has a career as a director. Before that, he was an established producer and still continues to work in that area as well.

Well, it’s safe to say that The King of Staten Island is not one of his better movies. Like the other serious and non-funny movies in Apatow’s catalogue, this one is way too long. It tries to do too much. And it takes it’s sweet time doing that. It forgets that an unspoken rule of comedy, (and this is definitely meant to be a comedy, although a more mature one,) is to not overstay your welcome. But even still, this is the best of those more serious Apatow films. It’s easy to say this is the best of his “bad,” movies, but the truth is, this movie isn’t bad. It’s just not great, like the movies on the other half of his list. So it’s the best of his more serious films. Let’s put it like that.

The reason why the movie works is because it’s interesting. Pete Davidson is a likable actor, at least for now. If he continues to play himself, (which he most definitely is doing in this movie,) it’s very probably that he wears out the good graces being awarded to him by the audience. His character here, much like a the real Pete Davidson, is a stoner who doesn’t aspire to much and is pretty okay with just going on the way things are going. Judd Apatow has this thing where he gets people to make movies about their lives, or their former lives and what things used to be like for them. Amy Shumer and Trainwreck is the prime example of that. When she made the movie, she had her own show, Inside Amy Shumer, and obviously the movie isn’t about someone who has her own show. But it’s about what Amy Shumer’s life was like before that, while she was single and dating.

Similarly, Davidson has been on Saturday Night Live for some years now, and the movie is not about somebody on Saturday Night Live. But it is about somebody with the outtake on life that Davidson seems to have. And it certainly feels like this was what his life was like before he landed SNL. Ironiclly there is another connection between Davidson, Shumer, and Trainwrech. Davidson was in Trainwreck, in a very small, one-scene part. He played a stoner (of course.) And that’s where he met Bill Hader. Hader then told Lorne Michaels about him and Michaels brought him in, liked him, and hired Davidson for SNL. Considering that Apatow was the director of that movie, it’s pretty cool that he got to direct this no-name guy in a film, watch him become a TV star, and then direct him in his breakout movie starring role. That being said, it wasn’t Apatow who knew cast Davidson, but Shumer herself, who was friends with him from the stand-up circuit and knew what a talent he was.

Getting back to The King of Staten Island, the movie is about this guy Scott Carlin, (Davidson,) who lives at home with his mom and sister. Only his sister is about to go off to college. Carlin doesn’t work. He lives off money from his mom who has a pension from his deceased father. That point is never made clear (where Scott gets money from, or the pension,) but it can be inferred considering that Scott’s dad was a fireman who died on a job. Davidson’s real father was a fireman who died in 9/11. And that story is pretty well-known. So using it as a springboard here, for this movie, is very much telling the story of a version of Davidson’s real life. There’s even a tribute to Davidson’s father at the end of the movie, as the credits roll.

Scott spends his days and nights hanging out with a group of friends. There are three guys who smoke weed all day and play video games. And there are a couple of girls who hang out with them too. One of these girls, Kelsey, is more than just friends with Scott. The two of them sneak off every chance they can get to go have sex with each other. And they’ve apparently been doing that for years. They’ve known each other since grade school to the point where, when Kelsey asks Scott why they don’t have a full blown relationship, he tells her he thinks of her like a sister, and it would be like incest.

The first half of the movie is pretty much about Scott and his friends. During this time we get some conversations with his sister, about her going off to college, and a graduation party for her. But that’a about it. The friends don’t really do or get up to anything, other than sitting around watching Scott give tattoos. That’s his hobby, and he walks around with a tattoo gun. He wants to be a tattoo artist, but no place will hire him and give him decent pay. We watch him even go into one place and get ripped to shreds by both the owner and a customer. We also see Scott working in a restaurant during this time as a bus boy. This is where the humor should have come from, but it doesn’t. Instead, we get some strange scenes that show the entire restaurant staff watching employees box with each other for the tips, after closing. It’s not as funny of an idea as the movie seems to think it is.

At the end of the first half, there’s a crime that is committed and for this one scene, the movie turns into a bit of a crime thriller. It’s actually a great scene, and definitely feels unexpected in an Apatow movie. And the scene ends with Scott more or less losing his group of friends. No worry though, because in the second half he is going to get a whole new group of friends. You see, something else that happened in the first half is Scott’s mom, (played by Marisa Tomei,) started dating a guy named Ray, (Bill Burr,) and Ray has been trying to bond with Scott ever since. Well, right around that halfway point of the movie, Scott gets some dirt on Ray from Ray’s ex-wife and brings it to his mom. The result is that Scott and Ray get into a fist fight of sorts, and Scott’s mom decides she is done with both of them. She kicks Scott out and tells Ray she never wants to see him again.

Now for a strange idea… Scott decides to go to Ray’s firehouse, (yes, he is a fireman too, just like Scott’s dad was,) and ask to stay there. Ray hates Scott at this point. The likelihood that he would ever take Scott in is ridiculous. But Scott says something like, “my mom will end up liking you a whole lot more if she finds out you were nice to me.” And so Scott is given a bed in the station. He has to work for it though, cleaning everything from the fire truck to the toilets. And during the second half of the movie, he bonds with these guys, including Steve Buscemi as the captain.

Considering how long the movie is, there’s really not a whole lot that happens here. Especially in the first half. In the second half, the movie becomes about Scott and Ray getting closer and learning to like each other. We all know how the movie is going to end and that includes not only Ray’s relationship with Scott’s mom, but also Scott’s relationship with the girl who wants them to start being serious together. But that’a okay. It’s one of those situations where knowing the end isn’t such a big deal, and seeing how they get there is somewhat fun. Only it would have been nice if the movie had more to offer. This movie is basically about Scott working three different jobs, (the restaurant, the fire house, and walking Ray’s kids to and from school each day,) and learning to get along with Ray. That’s it. Way too simple for such a long film,. It is entertaining, but would have been better if it was a whole lot shorter.