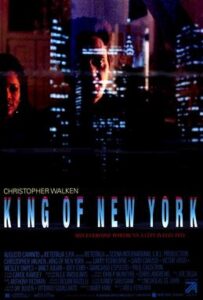 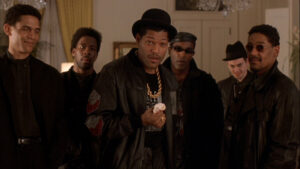 A pretty entertaining gangster movie about the nineties gangster, making it out of prison, and finding the lifestyle come ruching back at him in every way.

King of New York is a pretty solid movie. It’s the movie where Christopher Walken played a gangster tough guy to perfection, so much so that his one scene as a gangster boss in True Romance was basically a take on this previous movie. The film was made in 1990, which is the same year that Goodfellas came out, and that’a worth noting for a number of reasons. Goodfellas is of course the classic gangster movie that all other films in the genre either are or should be compared to, (it’s that and The Godfather.) But Goodfellas feels very different than King of New York, despite being released the same year. Goodfellas is a period piece set in the fifties and sixties, whereas King of New York is a modern gangster movie, set in current times. Witness the party scenes with Frank White (Walken,) and his crew, set to loud hip hop and rap music. Look at the lighting in these clubs. This movie often feels more eighties than nineties, which makes sense since it was on the cusp, between the two decades.

White’s crew has an interesting dynamic that is never really addressed. It’s composed just about entirely of black guys, (the exception is Steve Buscemi’s character, Test Tube, who only appears in the first scenes.) White is the progressive gangster. He’s the opposite of old school (and the opposite of everything Goodfellas was doing.) His crew is composed of African Americans because these are his friends. These are the guys who are loyal to him, and he doesn’t need to question that. When they meet up for the first time in Frank’s apartment, Frank breaks out into dance, does a few moves, and kicks back. He isn’t afraid to look silly. And he doesn’t need to maintain the front of the tough guy who never cracks a smile. This is so different than what we’ve seen in past gangster movies, that it’s pretty fascinating to watch. Still, as far as his relationship with the members of his crew goes, it might have been nice to get a line in here somewhere that explains how they all know each other and started working together.

The movie opens with Frank getting released from prison. We follow him into the limo that picks him up, and then as he rides in the car during the long journey home. While this is happening, we cut to scenes that are taking place on the street, back in Manhattan. First, there’s a man who goes to a phone booth and is shot up by a ton of guys who surround him. Before getting shot, one of the guys hands the man a newspaper with a headline about Frank getting released from prison today. This happens so early in the movie that we don’t really know who this man in the phone booth is, or who the guys are that are shooting him. The next murder is easier to make sense of. It happens during a drug deal, where Frank’s number two guy, Jimmy Jump (Laurence Fishbourne) goes into an apartment to buy some drugs and ends up killing the dealer. This is our introduction to Jimmy Jump, and he’s a fun character. Fishbourne is pretty great here as the leader of Frank’s foot soldiers. He has tons of crazy personality and really brings life and energy to the role.

After that drug deal murder, where Jimmy Jump and his guys not only kill the dealer, but also all of his men, they go to see Frank. By this point, Frank has just gotten home. He’s upstairs in his penthouse when the gang arrives, and this is where he breaks out into dance, and you can tell that these guys love him. So then the question is what does Frank want? What does he want to do? Frank wants to get back into the game in a major way. He wants a part of all of the action taking place around town. Any card game, any drug selling, anything at all. Frank also wants to be a donor who pays for a hospital to stay opened in a poor neighborhood. This is the Robin Hood element of the movie. Rob from the rich to feed the poor. It’s meant to paint Frank in the light of somewhat of a good guy, and to get us rooting for him.

Frank goes to see some old business associates of his at a restaurant, including a female lawyer and a man who has connections around town to get into see different guided made men, (this guy, Joey Dalesio, is played by Paul Calderon of Pulp Fiction and Four Rooms.) Frank tells Joey to deliver the message to a gang boss that Frank is back and wants in on the action. When Joey goes to see the gang boss, the man pisses all over Joey’s shoes. Bad move. Frank comes back short afterwards with his crew, and when the same guy now insults Frank, there are no more chances. Frank spins around, whips out a gun, and executes this guy right then and there. That’s three murders we have seen already, and each one is being presented to us in more and more detail. This time we not only know why the character is being killed, but watch everything leading up to his death, including what happens when Frank tries to setup a meeting with him (Dalesio was there to try to set that up.)

At this point, we start getting scenes featuring the cops who are keeping an eye on Frank. When the rival drug lords turn up dead (the one who got shot in the hotel room early on, and the guy in the phone booth, who was this man’s partner,) the detectives working the case are pretty sure that Frank is involved. They snatch him up one night, throw him into their car and drive him off somewhere to have a chat. They threaten Frank and show him the drug lord’s body, in the trunk of their car, but get no reaction from Frank. And so they let him go, leaving him in the middle of nowhere and driving off.

These cops are Dennis Gilley (David Caruso,) Thomas Flanigan (Wesley Snipes,) and Roy Bishop (Victor Argo.) Bishop is the senior officer and the one in charge of the unit. And he generally doesn’t like to play by the same hot-headed rules as the other, younger members. There are a couple of scenes of the guys talking, including at a wedding where Gilley is a best man and gives a toast. The groom is another cop in the unit. At the time of the wedding, it’s unclear why we are watching it. Is this just for us to get to know the cops as well as we know the criminals in a sort of Heat way? It turns out there is a reason, and involves the groom, but what happens to him won’t happen until much later on in the film.

The cops bust Jimmy Jump at a fast food spot, after Jump gives quarters to a bunch of kids to go play video games and then hands a wad of cash to the older woman with the kids, to pay for their food. Clearly the movie is trying to get us on the side of the criminals, and it works. Later on in the movie, Frank has a line where he says he never killed anybody who didn’t deserve it, and it actually seems to be true. Everyone he kills is in the game, and is crossing him one way or another. He even explains how the other drug kingpins who his crew executed were all involved in some horrific things and were awful people. All this, plus his attempts throughout the movie to raise money for that hospital, claiming that hospitals shouldn’t only exist in wealthy neighborhoods.

The first half of the movie I is more artistic than it is exciting. There are a number of deaths, to be certain, but they are interchanged with quiet scenes of Frank mulling around, pondering things, and just settling back into life. There’s a sexual scene on a train that is pretty weak when compared to other train sex scenes like the one in Risky Business. But it gets entertaining when three muggers show up, Frank flashes his gun, and then shows the guys how crazy he is by giving them money anyway and then offering them a job. If the first half is more quiet, however, then the second half makes up for it with the action and excitement. This is where the cops decide that what they have been doing just isn’t working, and so they decide to go after Frank themselves, disguised as a rival drug gang.

The movie isn’t anything spectacular, and doesn’t really provide much that we haven’t seen before, but it’s still pretty good. Any movie where we get to know a bunch of characters on both sides of a situation and then watch them get killed, one by one, is pretty  interesting, (any movie except for Den of Thieves, the movie that blatantly ripped off Heat every chance it could get.) But here, watching what happens to each member of the police unit and how their plan backfires, is pretty thrilling. And then there’s the climax, between Frank and the last detective left. Everything that happens here makes sense and seems pretty logical. Characters cross Frank or insult him, and then they get what’s coming to them because of it. All of this is kind of predictable. What’a not predictable is that the cops are going to attack Frank and his crew themselves, as a disguised raid, and that even as well as the ramifications of it, is what really characterizes the second half of this film. That’s where the movie really gets exciting and reaches new levels. It’s a well-made entertaining film, that is just a little too artistic from time to time.