The King Of Kong: A Fistful of Quarters ** 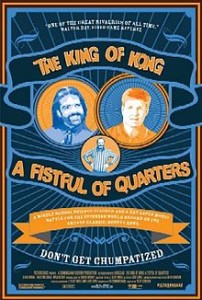 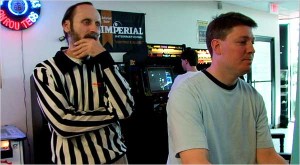 An interesting movie about competitive arcade game record holders that drags on a little too much by it’s end, but is pretty good until that point.

This is definitely a fascinating film that knows what a documentary needs to be successful. it needs interesting characters and a series of creative stories. this movie has both of those. it takes us right inside the lives of these people who obsess over getting the high score in a donkey kong arcade game. the really great stuff comes about halfway in when the movie turns dark and delves into foul play and conspiracy-like situations. it does end on an unclimactic note, but other than that, most things about it work out pretty nicely.

The King Of Kong is a fascinating movie. at the very least, this is something different, unlike anything we’ve really seen before. it’s a documentary about unusual people. now, lots of documentaries tell life stories of unique people and how they became this way. but this movie doesn’t just tell about the people, it tells about the competition, rivalry, and animosity between them.

these people are gamers. they devote their lives to playing video games. only these aren’t the new first person shoot ‘em up kind of games that are uber popular and ever evolving these days. instead, the guys in this movie play old games, and play them on giant arcade systems. that means they actually have the arcade games in their houses and just sit in front of them playing for hours at a time.

at the start of the movie, we meet billy mitchell, a man with a thick goatee and the world record at donkey kong. mitchell actually holds records in other games too, but it’s the donkey kong record that is his pride and joy. when another man fabricates his record and claims to have achieved a score higher than mitchell’s, billy mitchell calls him out on it, demands proof, and makes the other man admit that he was lying. since then, the two men have become close friends.

the man who is truly giving mitchell a run for his money, and trying to take on and tackle his score, is steve wiebe. this is a regular, average joe kind of guy with a wife and kids. he’s got a somewhat sad story, where the day he bought his house, and was also laid off. still, steve seems pretty happy in his life, and his wife generally tends to leave him alone to play donkey kong. that’s more than we can say about the kids. in one hilarious scene, where steve is right in the middle of acheiving his highest score, one of his kids is recorded asking steve to come over and wipe his butt. this is the tape that steve has to submit to the gamers association, to prove his high score.

the movie tells a couple of stories, and that’s what any good documentary reall should do. the first story is about the imposter and the fake score. it could have been explored a lot more, and i would have loved to know how the imposter thought he could get away with it and how exactly, billy mitchell busted him. but that’s not the primary story of the movie, and so the plot doesn’t spend a whole lot of time with it.

instead, steve is really the main character, and the film tries to get to him as fast as it can. i like the format of introducing billy and his story first, and of telling of how billy went to great pains to defend his title against the man who was lying about his score. during these scenes, billy seems like a hero, dedicated and out to prove an injustice was done.

it makes sense to show billy first because chronologically, we are hearing about stories that happened long before anyone knew of steve wiebe. but it also does something to the audience’s perspective, letting us start out by sympathizing with billy. he seems like a great guy at first. boy does that change.

steve is the guy who becomes our new hero. he shows us exactly how he planned out strategies for beating donkey kong, drawing in marker, on his screen, exactly where his character needs to move in certain situaitons. when steve does acheive a very high score, the gamers association sends two men over to take a look at his machine. only these men don’t come announced, and actually sneak into his garage, as if this is the watergate break-in. the sense of conspiracy and secrecy and sneaking around is very cool in these moments. it’s amazing that these people take it so seriously that they are willing to commit a crime over it.

the movie builds up to a climax, where steve goes to the arcade hall that people go to break records. steve breaks the record and calls billy out, and yet for some reason billy doesn’t come to stake his claim. instead he sends over a tape. when steve demands that billy prove his skill in person, billy shows up at the arcade, only nothing happens. the two men don’t even have words with each other. it is incredibly anti-climactic.

the worst part of that ending is all of the waiting. we wait for billy to show up and then for billy to approach steve and we don’t actually get anything that we are waiting for. the movie is interesting until it loses us in these final scenes. we really expect a showdown competition climax at the end, and i suppose the point is that this is real life and not a hollywood rocky movie. while the film does maintain our attention, it only has a handful of really exciting parts, and mostly leads us to a climax that never happens. there’s a lot to like about this movie, but there’s also a lot that could have been better.