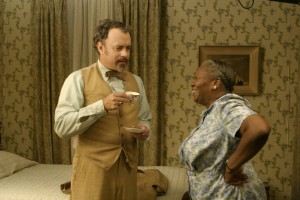 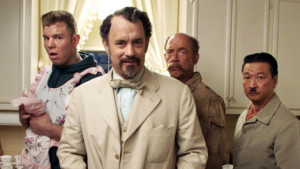 It’s not one of the better coen brothers films, but there is still lots to appreciate here, including the rich dialogue and fun humor.

Brief review: The Ladykillers is an okay coen brothers movie. it’s one of their weaker films, and yet it still has a lot going on. that’s because eveyrthing these guys touch ends up being both artistic and fun. the humor is definitely here, even if many of the jokes don’t work as well as they should. the movie looks great, and the dialogue is very well written. but then there’s the plot, about a group of men who pretend to be a band of musicians in order to rent out a basement, tunnel through the walls, and pull of a robbery. this is a decent enough premise, but it’s also not very unique. the charactrers are a very ecclectic and diverse group, but none of them is really explored or given much to work with. so there are things left to be desired here, but even still, just for the humor, dialogue, and atmosphere alone, this movie does work.

the coen brothers are the most artistic, creative, and smartest filmmakers in the world. i love tarantino, but at a certain point his movies and characters all sound kind of the same. not so with these guys. they tackle present day crime stories and period pieces alike and always come away wtih presenting fantastic humor. sometimes their movies are goofy and other times they are dark, but one way or another they are always smart.

The Ladykillers might be one of the toughest coen brothers movies to appreciate. that’s saying a lot, considering that some of them are extremely dark, and have humor levels that most would just find strange. movies like millers crossing and barton fink are not for the mainstream. but somehow over time, the coen brothers found a way to get their humor embraced by the general public. it was probably the one-two punch of fargo and then the big lebowski, two movies released within three years of each other. from there, these guys just got bigger and bigger, making oh brother where art thou and then winning best picture with no country for old men. but the ladykiller is something different.

it’s different because it is more goofy than most of their films. the plot is simply about a band of men who pretend to by a music group playing their instruments, when really they are trying to pull off a heist. the movie is a remake of a film from the fifties, starring sir alec guiness. the movie was a little better than this one, with it’s film in technicolor and interesting characters. this coen brothers version puts humor ahead of everything else, and since it is only moderately funny, the film as a whole is not great.

for one thing, the plot is very simple. professor dor (tom hanks) shows up at the home of an elderly black woman and offers to rent her basement from her. he tells her that he and his band members just want a place to practice. she agrees to take him on as a tenant, but only after he rescues her cat from a tree. this professor is a unique character, but he’s one of the only truly interesting characters in the film. he dresses in white suits and speaks with delicate language and careful choice of wording. he is basically like a poet. the coen brothers have always excelled in their use of dialogue and the words that charactrers would use, and this professor character is right at home with their form of writing.

the problem is that the other members of the music group aren’t anything special. it’s nice to have some recognizable faces here, including the always reliable jk simmons, and marlon wayans (a surprising choice for a coen brothers film.) but neither one of them has much going on with his character. and that’s a lot more than I can say about the other two members of the group, a mysterious asian general and a big dummy linebacker, who seems like a genuine nice guy, but is clearly dumb as bricks.

the plot has the men dig a whole into the basement wall, which will become a tunnel. that tunnel will lead into the cash room of a nearby casino. it all seems great, excet there’s one thing that the men somehow never considered. none of them can actually play any music. didn’t they think that at some point, the old woman might want to hear them play a song? when she does ask them for this, they somehow manage to get away with reciting a poem instead. and when their reason for not playing music is that one of their band members is absent, the movie does something very foolish by then having that band member show up. nobody says, “now that he’s here, you guys can play us a song?” it’s a clumsy mistake in the plot.

luckliy the movie continues on pretty quickly, never lingering with any one point. that’s both a good thing and a bad thing. the good part is that it moves quickly, but the bad part is that there really isn’t a whole lot happening. we do get some funny scenes sprinkled in every now and again, such as a scene where the local policeman comes to visit the old woman, and the professor hides under the bed with his tea cup. when the old woman tells the policeman the professor is drinking tea under the bed, it sounds so ridiculous that it is easily worth a laugh.

the movie could have used more scenes as funny as this one. instead, it banks heavily on the professor’s laugh being a funny feature, and that laugh comes out much more as annoying than anything else. the humor here is very hit and miss. some of it works, some of it doesn’t. the plot has our characters pull off the robbery, but then have plenty of consequences to deal with afterwards. at a certain point, the men plan to kill the old woman just to keep her quiet, and what happens to each one of them from that point on is a lot of fun.

this movie is more inconsistent than the usual coen brothers movie. there’s nothing especially great on screen here. it’s certainly an interesting group of guys that were put together to be in this band, but none of them is given much back story or many character traits. the setup is nice, but the content and filling are very thin. the general ends up being the most interesting among them, with that cigarette that he can just flip into his mouth, in a moments notice, by using his tongue. only, this characrer is also the one we know the least about. when the most interesting character is the one who has the smallest role, you know that something is not quite right.

While there is plenty to find complaints with here, most of that is simply because this movie is not up to the usual coen brothers standard of excellence. even still, it is a good film, and better than most others. that’s because at the very least, the writing and humor are strong. the plot might not be all that creative, but it sure goes in some interesting directions during it’s second half. and the dialogue here is absolutely masterful. especially with what is spoken by tom hanks. as always with a coen brothers film, the look of the movie is also pretty great. the wonderful director of phtography roger deakins helped with that, and his work always goes a long way. the movie is certainly not great or anything special, but it still works on some artistic and fun levels. it’s hardly the smartest or most creative movie, but there are definitely a handful of things that the movie has going for it. this isn’t the best coen brothers movie, or even in the same ball park as some of their best work, but it still ends up being kind of fun.