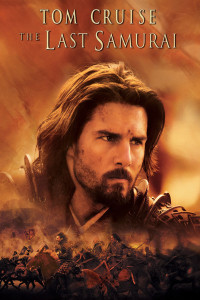 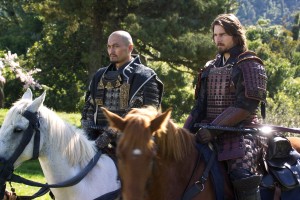 A pretty powerful and compelling movie about Samurai culture and Japanese history.

This is a cool movie. It tells a fascinating story about a man who is kidnapped by the enemy and treated like a member of the family. Lieutenant Algren (Tom Cruise,) learns to embrace and appreciate the samurai and their culture. He goes from a man who is angry with the world and just taking jobs for money,( a complete sell-out who is well aware of it,) to a man who has found a new reason to live. Watching Algren fall in love with the people and the culture is pretty interesting. But then in the second half the movie starts becoming too heavy handed and too directly about the conflict. Suddenly there’s a one-track agenda. The film is definitely a little too long, and instead of saving most of the conflict parts for the second half, it should have been spread out a little more. Still, the story here is incredibly interesting and the characters, dialogue, and atmosphere are all pretty great.

The Last Samurai is a movie that is an incredibly interesting film in its content area, place in history, and understanding of culture. Regarding the content area, we’ve got a story about a man who is hired to do a job he is taking just for the money and ends up kidnapped by the enemy. There, he is treated as an equal and learns to appreciate his captors. He learns to embrace their culture. These people give him something to care about again. That’s where we get into the Samurai culture. And then there’s the history angle, taking place in the late 1800s, when Japan was becoming westernized and modernized and the Samurai of the old found they had no place in this new world.

The movie is both deep and smart. It gives us an anti-hero who is truly broken at the start of the film, and shows us a full arc of him becoming a man who is caring and passionate, the way he once was before. Natthan Algren was a great military general in the Civil War. Now he helps sell guns by giving speeches about the excitement of war from the point of view of being on the battlefield. He hates his job and hates that he has to glorify a time when his men were dying all around him. We get all this from the opening scene of Algren drinking himself into a stupor, yet still mustering the energy to get out on stage in front of a crowd. His boss tells him that he’s fired after this performance, right before he goes out. What a pep talk. And Algren lets the crowd have it. He holds nothing back.

And yet, when he gets off stage, he is recruited by someone else for another job. This would be a long time friend of his, Zebulon Grant (Billy Connolly.) The two men fought alongside each other in the war, and now Grant has a job proposition that involves Algren going to meet with the Emperor of Japan. First, he must meet the recruitment officers here in the United States. There’s Colonel Bagley, (Tony Goldwyn,) another man who Algren fought with in the war, and Omura, the Emperor’s right hand man. There’s bad blood between Algren and Bagley, and we quickly learn why. Bailey killed a whole village of people. He shot down helpless women and children. When confronted about it, Bailey tells Algren that he was just following orders.

These men all go over to Japan to meet the Emperor. He’s young and delicate, and sits by himself in a corner of the room, hiding in the shadows, watching. He steps forward to thank the men who have come to train his army and then returns to his private chambers, hidden in the background of the room. And then the training begins. Algren and Grant try their best, but most of these men are farmers who have never held a gun before. And pretty soon, Omura is saying that it’s time for them to go out and fight despite Algren’s pleas that the men are just not ready yet.

The fight takes place out in the woods with Bagely and Omura running to the backlines as Algren and Grant stay up front with the men they’ve trained. The samurai, led by Katsimoto (Ken Wantanabe,) are fierce and fearless. They run right over the Japanese army and Grant is killed. Algren stays to fight and is the last man standing on the battlefield for his side. The samurai have him surrounded and prepare to execute him. That’s when Algren pulls out a blade and slams it  into the neck of the man who is trying to kill him. This man is dressed in red armor, and he falls down, dead. Katsimoto is impressed with what Algren has done here, and he instructs Algren to be brought back to their home as a prisoner.

Only he isn’t treated like a prisoner. Instead, Algren is treated like a member of the family. Katsimoto tells Algren that he knows he is the enemy, but he wants to study the enemy and learn, not jus torture him and move on. Algren is taken care of by the widow whose husband was the man in the red armor. He has meals with her and her family. The family is composed of a brother and the children of the man who Algren killed. This is a very strange situation. The woman begs her brother, Katsimoto to make it stop and to let her take her own life, but he refuses. He doesn’t think Algren is such a bad guy, and it turns out he’s right. In a scene where Algren apologizes to the widow for taking her husband’s life, she tells him she understands that he was just doing his duty the same way that her husband was.

Algren recovers from his injuries of fighting with the samurai in the woods and then begins to learn their fighting style. He starts training and practicing with them, and there are a couple of scenes of him getting his butt kicked. This continues until one day, Algren is able to match the man who keeps knocking him down. He learns to speak the language and when there’s a raid on the community by attacking Ninjas, Algren is the one who spots it and gets Katsimoto’s attention. This leads to a fantastic action scene with everybody fighting in the homes of this village. Algren and Katsimoto fight side by side for the first time, and it’s pretty great.

Now Algren is ready to accompany Katsimoto to Japan, where the Emperor has promised safe pastesage. Algren has proved his loyalty during this attack, and Katsimoto is called upon by the Emperor. The Emperor has great respect for Katsimoto who was once his teacher. The problem is that the Emperor is trying to modernize Japan and Katsimoto’s way of life goes against that. Still, Katsimoto offers to take his own life if that’s what the Emperor commands of him on a number of occasions. The Emperor never does. But the Emperor’s right hand man, Omura, wants Katsimoto dead and out of the way. He’s the one who hired the ninja warriors that attacked. It’s right around here that the movie starts to slow down for the first time. Surprising, since it is the time when we are back with the enemy again, but it seems like at this point the film has stopped being about culture and is now on a direct path to get us to the heart of the conflict. And there’s not a whole lot to fill that space in between this point and the battle.

Yet the movie does try. Whatever it uses to fill the space is pretty dull. An example is that there is one scene where the widow that Algren has been staying with undresses him and every movement in this scene seems to take forever. While the story and character development is dying down at this point, the action is certainly ratcheting up. We get another attack on Katsimoto’s village, this time by soldiers carrying guns. And then it’s time for the climactic battle, which is terrific.

The Last Samurai is a pretty cool movie. It is a little two long, at two and a half hours, and should have tried a little harder to trim the fat. Director Edward Zwick is one of those epic movie makers whose films are beautiful, but not always as tight as they could be or should be. He made Glory and Legends of the Fall, and those movies were his claim to fame, but in more recent years, Zwick has been getting worse. He went from those first two movies which were great, to Blood Diamond and Defiance, which were good, to Pawn Sacrifice and Jack Reacher: Never Go Back, which were terrible. The Last Samurai is certainly one of his better films. It loses its way a little bit towards the end, but for most of the way through this is a fantastic film.