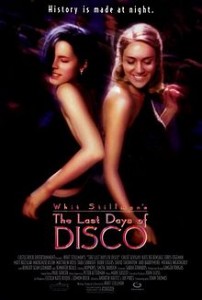 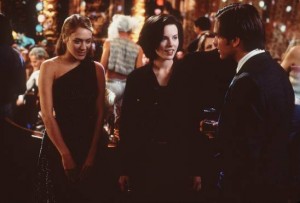 an interesting look at young nyc life in the early eighties and the clubs these people would frequent.

Brief Review: this is a fun movie about young people dating and going out in new york city back when disco was still popular, but also on it’s way out. the main stars of the film are two girls who couldn’t be more different from each other. charlotte (kate beckinsale) is an elitist who thinks the world is in her hands and has no problem being mean to people or telling them what she really thinks. alice (chloe seveigny), on the other hand, is much more reserved and calm. she often can’t believe the things that come out of her friend’s mouth. together, they patrol the night, along with a host of guys who each have their own problems, mostly relating to the club. the club that they all go to is very exclusive and difficult to get into. one of the guys works there, another tries to sneak people in for a firm, and a third is a detective trying to close the place down. and they all mix and match with dating these girls. the story is fun, but the humor is even better, as these characters dig into many funny and ridiculous conversations. the movie does get slow at times, but for the most part it’s pretty good.

The Last Days of Disco is a whit stillman movie, which tells you a little bit about it right there. stillman is a guy who hasn’t made many movies, but nearly every one he’s made has been memorable. from metropolitan to barcelona to this movie, his films are about young upper class life. these aren’t the kids who go out an d commit crimes or do anything too exciting, but just kids who date each other and have interesting conversations.

and that’s pretty much the story with The Last Days of Disco, which not only tells that usual whit stillman kind of story, but sets it in the time of the early eighties when disco really was on it’s way out. most of the movie takes place in a night club where one of the main characters works and the rest go to nearly every night.

the real leads of the film are charlotte and alice. charlotte (kate beckinsale) is a snobby, selfish girl who says things bluntly and doesn’t seem to notice or care. alice, (chloe seviegny), on the other hand is the nicest, sweetest girl in the world. she is more reserved, thinks before she speaks, and has anger building up inside of her, mostly at charlotte.

the two girls are friends, despite the way that charlotte treats alice. they go to the night club together each night and meet their other friends there to sit around a table or get on the dance floor and dance to the music. aside from these two girls, we also meet a bunch of guys who hang out at the club. there is jimmy, the simple, friendly guy who is dating charlotte. he’s in advertising, but his main job is to get clients into the club. that’s why the firm has hired him. for his connections and ability to get people in.

then there’s des and josh. des is the guy who actually works at the club and sneaks his friends in. he’s the reason why jimmy is able to get people in. des, like jimmy and like most of the guys in this movie, is not very confident, and is always looking over his shoulder. he has a funny story that he tells about the first time a woman took off her shirt for him and how he was basically held prisoner by the experience. i like the way he not only tells this story, but then in a later scene the story is analyzed by some of the characters.

and then there is one more male lead, josh, who is a detective, trying to snoop out the illegal activity that is going on at the club. more than anything else, he just wants to one day say the line, “book this clown,” as they are taking someone away. josh is probably the only real good guy, who isn’t weak, in the movie. he is also one of two guys who is courting alice. the other one is des.

now a conflict of interest is that josh and des are friends. they go back a long ways and know each others stories and josh is actually looking out for des with knowing that the club is under investigation and warning his friend to get out of there. but when it comes to love, anything goes. josh never gives up his respectability in order to win alice from des, but he certainly has opportunities to do so.

at the start of the movie, the big issue becomes about getting people into the club. jimmy shows up with a car load of clients and has a hard time getting them in. by the time he finally does, most of them have already left. then the next time he tries to get them in, they have to wear wizard of oz costumes so that nobody knows who they are. jimmy is included in the costume wearing ridiculousness.

meanwhile, the girls are looking for an apartment together, and there’s a lot of humorous attention paid to the type of apartment they get. it’s a railroad apartment, which means every room is in a straight line and you have to go through each others bedrooms just to get to the bathroom. either that, or go out through the hallway and then enter in through another door. this ends up working it’s way into a number of funny scenes.

the movie starts to get a little tiresome after a while, but for most of the time, it’s pretty good. the conversations are equal parts crazy and funny. these characters dissect the smallest things and come up with interesting interpretations about them. i love, for example, the conversation about the tortoise and the hare, and how it was a fluke for the hare, and that hare will never lose again, and the tortoise will never win again. towards the end of the movie, we really get a sense of what the title is all about, and up until that point, it’s a pretty interesting view of the young social life during this time. it helps that the characters of charlotte and alice are so different and so much fun when they get together. charlotte might be pretty insensitive, but she is the character who gives life to the movie more than any other. it’s an enjoyable film.