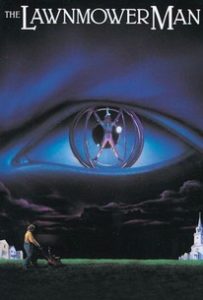 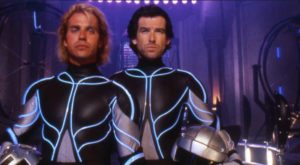 A movie that uses the back drop of virtual reality from the nineties to give us the story of a guy who gets powers and uses them for evil, this is nothing new or interesting at all.

The Lawnmower man is not a very good movie at all. It was a movie that was actually somewhat popular, back in the early nineties, and developed a bit of cult following. The reasons for that were simple. It gave us little previews of what virtual reality looked like and could be. Only now, nearly thirty years later, we know that all of this movie’s promises about the future were inaccurate and totally ridiculous. The virtual reality here is really just a version of In The Mind’s Eye, that obscure video about weird designs coming together to form shapes and objects while moving around. So the virtual reality element is out. After all, it simply makes everything look like a badly drawn cartoon, whereas real, good virtual reality would hopefully look realistic, to the point where you couldn’t tell the difference between that and reality.

So if the virtual reality is out, as a reason to see this movie, then what’s left? Well, nothing really. It’s a movie about a guy who goes through a sort of experiment and ends up getting powers. Job, (Jeff Fahey,) is a mentally challenged man who works as a gardener mowing lawns. He spends his days doing that, and spends his night working at the Church, for an abusive Priest. And the movie is about how this “experiment,” that is done to him by scientist, Lawrence Angelo, (Pierce Brosnan,) makes him into a genius first, and then gives him powers second. The powers are that he can read people’s minds and hear what they are saying. But then they go ever further. Suddenly he is able to move objects with his mind.

In today’s day and age when superhero movies have been the biggest thing at the box office for over a decade, an attempt like this that tries to do too much at once instantly falls apart. The good superhero movies of today take things in stride. The first Iron Man took its time developing the character and his origin. And while The Lawnmower Man isn’t really an origin story, it certainly feels like it could have been one. But it needed to reign things in a little. In fact, more than a little. Much more. Let’s put it this way… the lab where all of these things happen looks like a dungeon. The hallways look like caves. It’s more of an evil James Bond movie lair than it is a laboratory.

And that is in large part the problem with this movie. Nothing is really thought out or given time. Everything here is predictable. So early on, when Job is still the mentally challenged young man, we see two different abusive characters. There’s the Priest, who beats Job in his private chambers, and then there’s the father of the boy who Job is friends with. Both abusive characters are so over the top, doing things out in public, and not holding anything back, that it’s pretty obvious we will see Job get vengeance on these characters later on. Nothing like foreshadowing 101. And those are just examples of how basic this movie is.

It all start with Doctor Angelo using chimpanzees for his experiments. He puts them into the virtual reality machine, which involves being strapped in and spinning around and around again. This thing looks more like a NASA space simulation where the test to see if you can handle the dizziness and not getting sick, rather than to actually transport you into another world. But it looks kind of cool, and so we go with it. We watch the chimpanzee’s point of view as he travels the hallways, sneaking around with a gun that he has stolen off a security guard. It’s like watching a cyborg’s vision, and is very basic stuff. Especially when coupled with the dark, smoky corridors and the eery – corny music.

If that chimpanzee situation sounded a little too much like the James Franco Rise of the Planet of the Apes movie, (the one that started the Caesar Apes trilogy,) that’s because it was. Now, obviously the Lawnmower Man came out first, but I suppose the point is that everything that happens in this movie has been done much better somewhere else. Another example is the costumes. To go into the simulators, these guys where spandex outfits that have neon lines running over their otherwise black material. It looks exactly like something out of Tron, (a movie that did come before this one, although the sequel, Tron Legacy is by far the better film, and came way after this.)

Getting back to the story, Job agrees to partake in the experiments because Doctor Angelo tells him that he might actually become smarter. He talks to him about how sometimes people take advantage of Job, and how that won’t happen anymore. And so Job gives it a try. We have already seen Doctor Angelo get hooked on his own experiments and technology to the point where it drove the woman he was in a relationship with away. Every time she would come down to the basement, he would be lying on his back, suspended in the air, in a seat that made it seem like he was floating, with goggles on, so that he couldn’t see what was actually right in front of him. And finally, one day, this woman had enough, and decided to leave.

That’s when Doctor Angelo decided to get to work with Job. It was kind of a nothing to lose situation. He was no longer holding back because of his relationship or anything else, and so he went full throttle, getting this mentally challenged man to be his test subject. Speaking of Job and the mentally challenged angle, this movie really plays up the cliches of what someone in that situation might look and sound like. He walks around with overalls, and one of the straps isn’t even on. It’s not that it fell down, it’s just his style. This is the kind of character that Tropic Thunder made fun of, (not for being mentally challenged, but more of Hollywood’s depiction of mentally challenged people,) when Ben Stiller played a character named Simple Jack.

So Job starts partaking in the experiments, and these often involve him lying on his stomach on a simulator that is kind of like a motorcycle. It moves around just like a video arcade game might, as Job sees his racer speeding around, through his goggles. And soon Job is looking different and acting different. He starts wearing button up, nice shirts and combing his hair differently. He stands up to the bully at the gas station and gets the attention of the local starlet whose lawn he mows. Soon she is inviting him in for lemonade and sex. And the next thing you know, Job is in a relationship with her.

The story might be pretty dopey, but it definitely moves. That is, until the second half. For some reason, this movie becomes about the company, making the higher ups into villains who want to exploit Job. Only it does this in such a way that feels incredibly forced. Like they just needed more villains. So there’s the gas station bully, the two abusive characters, the company that is financing the experiments, and even Job, himself. Everybody is a villain. One can ever say that Doctor Angelo is a villain for what he does to Job. And that’s really all this movie is. Threat after threat. The one story that’s kind of interesting, where Job takes that girl he is seeing into the simulation room for a try, and then she comes out braindead, doesn’t even have a conclusion. At least not one that we get to see. We only hear about it in passing, that someone spotted her wandering around aimlessly talking to herself, or something like that. The Lawnmower Man really doesn’t have much going for it. Some of the machines these characters get into for the virtual reality look cool, but that’s about it. The story itself and characters are pretty weak, and it turns out to be very much be like a collection of other, better movies that we have seen before.