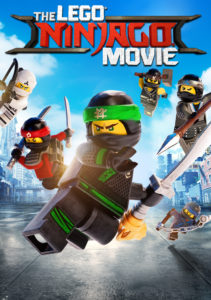 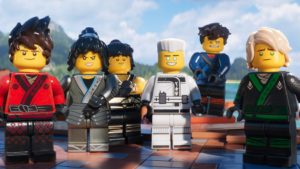 Once again the Lego Movies have come up with something different to add to the genre, this one isn’t as good as the first Lego Movie or the Lego Batman movie, but it still has a lot to offer.

The Lego Ninjago Movie is pretty fun. It’s a Lego version of a sort of Crouching Tiger Hidden Dragon meets Power Rangers scenario where there is this group of ninjas, (each with their own color and element,) and they each have their own giant Mech robot. They use these to fight evil and keep the city of Ninjago safe. But the humor and story come from the more human aspects about our protagonist Lloyd (voiced perfectly by Dave Franco,) and how the world seems to hate him because of who his father is. This movie is filled with jokes and most of them land. And the action, in the first half, is pretty entertaining. In the second half, however, the movie does go downhill a little when the characters lose their mechs and are forced to venture into the jungle on foot. At that point the movie becomes more about Lloyd’s relationship with his father and less about the group of friends. Granted that the father, Gargadon, (voiced nicely by Justin Thereaux,) is also a pretty humorous character, but the friend dynamic is one of the best parts of the film, (Kumail Nanjiani, in particular, really delivers here,) and so when these characters are put on the back burner, the story definitely loses some edge.

The Lego Ninjago movie is surprisingly a pretty entertaining movie. The surprise comes from the idea that when this one came out, the Lego Movie Franchise was starting to already feel pretty exhausted, with the Lego Batman Movie coming out just months before. Granted, it had been three years sInce The Lego Movie came out, but even still. Now they were starting to feel rushed. Add onto that the fact that unlike Batman, most people weren’t familiar with Ninjago, as a name brand. Ninjago is a kids’ TV show that uses these Lego pieces as characters. Think about it like this, if the show is popular and doing fine, then why make the movie? What would the movie have to offer us that the show doesn’t? The only time things like that happen, with live action films, is long after the show is finished with its run (Sex and the City, Entourage.) So putting an animated Lego movie out that looks exactly the same as the show seemed a little strange. Either you had never head of the Ninjago show, or you had heard of it, and were wondering why they would be making it into a movie.

But despite these things, the movie worked. It capitalized on the ancient spiritual Ninja wisdom ideas in Kung Fu Panda, and combined them with a Voltron meets Power Rangers concept about high school teenagers who have secret identities as Ninjas that ride around in giant Mech robots. The first half of the movie is far superior to the second. For one thing, it’s only in the first half that our group of teens have their mechs, and these things are insanely cool. But in the second half, the emotions and cliches start coming out, (often intentionally,) and the mechs go away.  That’s when our characters are forced to travel into the jungle on foot, and the movie starts going downhill.

Consider that the second half is in large part about trouble within the group, whereas in the first half, everything seems to be moving smoothly. We are brought into the movie through live action, the same way that The Lego Movie ended, with real life actors leading us slowly into the Lego world. This time, a boy wanders into a Chinese antiques shop and meets the store owner, played by Jackie Chan. The store owner does some magic tricks, offers some advice and wisdom, and then we are whisked away to the magical Lego land of Ninjago. Jackie Chan will be voicing the master there, Master Wu, and he makes it pretty clear at the beginning that the characters in the real world are represented by other characters in the Lego World, Wizard of Oz style. So the shop keeper is Master Wu, and the Green Ninja, Lloyd, is the boy who brings in his Lego Piece of a boy, and watches as the shopkeeper transforms him into a green green ninja LEGO piece.

From here we dive into a fish tank, and then through the water, move up into the world of Lego Ninjago. It’s a pretty cool effect. And that’s when the local News Station begins their introduction with a show called “Wake Up Ninjago.” This thing is lively and exciting and very much in the vein of the first Lego Movie, with it’s TV shows and “Everything is Awesome,” song. Here, the energy is fantastic with Ex-football player turned media personality Michael Strahain playing himself as the news anchor, and the news tagline being, “we’ll be there.” We get things like “When Gargadon attacks.. we’ll be there.” The Wake Up Ninjago show introduces us to the world, and also introduces us to the different Ninjas who are like local celebrities in this city. It even shows off the mech of each Ninja.

This all ends with the birthday announcements. One of these birthday belongs to Lloyd, the green ninja. Nobody knows he’s the green ninja, but the kid, Lloyd, is hated by all. He’s hated because of who his father is. Gargadon, the evil dictator (voiced brilliantly by Justin Thereoux,) who enjoys coming into Ninjago and destroying the place, just for fun. He sends in his generals and gives them order like “knock over that hot dog stand,” and “pop that kid’s balloon.” There’s this, and then there’s also the massive destruction he orders his men to do, like “take down that police station.” And everybody knows this guy Gargadon is Lloyd’s dad. Everybody except for Gargadon.

The running joke in this movie is how bad of a father Gargadon was, and still is.  On Lloyd’s birthday, for example, Gargadon but dials him, and then tells him story after story of things he regrets. None of them are giving up kid child. He eventually gets to talking about Lloyd as a baby and describes him as a bald, toothless monster. All of this is pretty hilarious. And then Lloyd gets off the phone and heads to school.

At school we meet Lloyd’s friends the other teenagers who are also ninjas. Other than these kids, (which include a robot boy,) he is disliked by everyone, to the point where they stay on the other side of the bus or hall as him. But his friends are enough. And when Gargadon attacks, they all ask for a bathroom pass at once, break out of the classroom and over to their lockers where they take elevators down to the garage with their mechs. Each mech, or giant controller robot, looks different, and has its own theme. One of them for example is a DJ mech. Complete with turn tables inside. Lloyd’s mech is a giant green dragon.

When one of the fights against Gargadon goes horribly wrong, Lloyd accidentally unleashes a cat on the city. Not a LEGO cat, but a real live cat. This is again playing with the human world – Lego world mix, the same way the opening in the antiques shop did. Lloyd unknowingly causes the cat attack by using a laser pointer against Gargadon, which he believes to be “the ultimate weapon.” After this goes down, and blows up in Lloyd’s face, there’s hell to pay for it. Suddenly, even his friends are against him. Sure, the cat was an accident, but they don’t like the way Lloyd always targets only his father and seems to be blinded from everything else. This includes the fact that he never lets any of the other ninjas go after his father. And the cat attack led to the destruction of every one of their mechs. So these guys now look at Lloyd the same way that everyone else does. Poor guy.

And that leads to the second half, where our characters venture into the woods to find the Ultimate Ultimate Weapon. The second half definitely slows down. It does give us more story (the relationship between Lloyd and his father moves to new levels,) but in order to do that, it sacrifices some of the fun. There’s a cool deadly butterfly scene with Master Wu, on a rope bridge, but otherwise, this second half gets pretty tame. And one thing that becomes very apparent in the second half is that they aren’t so focused on making everything out of Legos anymore. That was one of the coolest things about the Lego Movie. Even water, fire, and clouds were made out of Legos. In this movie, the priorities are elsewhere.

Now, what this film does do some things to make up for this. What that means is that it does give us some other Lego specific ideas, to remind us, and joke about how theses are Lego pieces and not just humans or dolls. One is that at one point a character’s head gets stuck to another ones foot, and there are lines of dialogue about it. Another is that at one point s character’s arm falls off, leaving a solid hole, the way it would on a Lego piece. And again, there’s dialogue and discussion about it. And all of this works. The jokes are there. It’s the story that is somewhat lacking, (a little too much about how Lloyd never learned how to throw a ball from his father.) There are some great voice talents on board here, but only two characters really get the chance to shine. Lloyd (Dave Franco,) and Gargadon. Kumail Nanjiani is fantastic in a small part that we would love to have seen more of. But this movie is so focused on the father – son story that it forgets to explore anything else. There’s good humor and ideas here (the elements situation is pretty cool,) but a more creative story would have gone a long way.