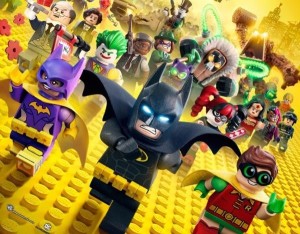 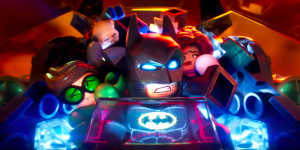 Not quite as good as The Lego Movie, this one does have a funny premise about Batman, the loner who doesn’t need anyone and how that effects him both as Bruce Wayne and also as the caped crusader.

Now here’s a creative approach to a Batman movie. This is a movie that uses all the Batman villains in history as only a small part of the story. It does this by having them all attack Gotham at the start of the film, and then quickly get out in their place by Batman.

The Lego Batman movie is a good film. It’s funny and entertaining as all hell. The story is not restrained by anything, not even realism, (which is something that separates this from every other Batman film.) So characters go to a phantom zone, for example, which is basically a prison or afterlife in the sky. There’s no attempts to be serious or dramatic in this movie. Even when examining real ideas like a character who is a loner with an arrogant, doesn’t-need-anybody, personality, the movie does it in comedic ways. And all of this works!

The storyline is mainly about the Joker (voiced by Zach Galifanikus,) wanting to know that he’s important to Batman. He wants Batman to  say, “I hate you, Joker,” and to acknowledge that the Joker is his worst enemy. Only Batman refuses to do that. The Joker says that they need each other and that fighting him all the time makes Batman a better hero, (and makes the Joker a better villain.) Only Batman doesn’t care about any of this.

This  inspires the Joker to come up with a totally original plan. But first, we get some immediate excitement. The movie opens with a giant action scene where the Joker, along with every Batman villain ever, attacks Gotham. There’s plenty of comedy here, from the two plane pilots calling themselves “two best friends,” to a character called Condiment Man who squirts ketchup and mustard. But what really makes this sequence work is the action. It’s funny talking about action in an animated movie, and even funnier talking about it in a Lego animated movie, but when it works, it works. And here, the filmmakers take advantage of having this medium, where they are restricted by nothing, and they go all out.

The opening sequence is so great, in fact, that it takes a long while before Batman even shows up, and we don’t mind. That opening sequence is devoted to introducing us to each and every one of the villains, as well as to the Joker’s monster plan. The idea here is to start the movie off with something we’ve never seen before, all Batman villains teaming up together. And then to squash that threat so quickly that the audience is left wondering where in the world the threat can come from now. If Batman can handle very villain working together, so easily, then what villain can actually pose a real threat? The movie has a plan.

The plan is that the Joker is going to allow himself to be captured and locked away in Arkham Asylum, (him as well as all of the other Batman villains.) Then when Batman gets a weapon that can send him to the Phantom Zone, the Joker will willingly get sent there, where he can meet and team up with all the worst villains of the universe. From Voldemort to Sauron, from the Gremlins to King Kong to The Matrix’s Agent Smith. We still have the usual Batman villains sitting in prison, (who the Joker has turned his back on,) and now there’s all of these guys as well .

Aside from this villain-packed storyline with the Joker, the other story involves Batman taking a boy under his wing. That boy is Dick Grayson, better known as Robin. The movie makes him flamboyant, and in need of a Dad. Bruce Wayne (voiced brilliantly by Will Arnet,) is in need of a family. He spends his nights staring at the portrait of his parents, hanging on the wall, and being miserable. Only Wayne will never admit that. He’s rude and arrogant to everyone, including his butler, Alfered.

This movie is big on groups of characters. There’s the group of Batman villains who hang out together, (and are imprisoned together,) then there’s the group of Warner Brothers movies villains, (Sauron, Agent Smith, Ect.,) and then there are also the DC superheroes. Batman finds them all hanging out at a part that he accidentally crashes, in Superman’s fortress of solitude. We’re talking about Superman, Wonder Woman, Aquaman, The Flash, the whole nine yards. And Batman is the black sheep who didn’t get an invite to the party.

Another thing that works about this movie is it’s references to other Batman films. I actually wish there were more of these. In this film, there are just two quick ones. The first comes when the Joker’s previous plans are called out. There’s the time with the two boats (in The Dark Knight,) and then there’s the time with the balloons and Prince music, (the Michael Keaton- Jack Nicholson Batman.) That’s the first reference and it only comes out in quick dialogue. The second reference has Alfered call Batman out on previous stages he’s gone through by the quick shot of each movie and year,  (so for example, we hear that Baymsn went through something similar in 1997 and see an image of the bat nipples from the George Clooney film Batman and Robin.)

The only flaw of the film is that it doesn’t make jokes about the past Batman films of the past enough. Not the films or the villains. Consider that each major villain (other than the Joker,) has about two lines of dialogue. So we don’t get jokes about how ridiculous the Riddler or the Penguin are as characters. We don’t get anything calling out the recent Batman Vs Superman film on its stupid “Martha, our moms have the same name, let’s be best friends,” idea. What the movie gives us is great, but it would have been nice if it had been willing to make fun of itself a little more. Other than that one thing, however, what we have here is a pretty excellent and very funny movie.