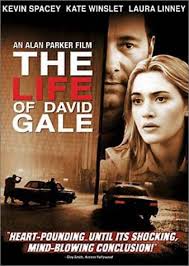 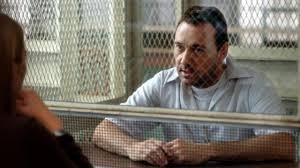 An okay movie, the ending twist is cool, but everything leading up to it is just mildly entertaining.

A very average film, this one works on a first viewing, about a professor who is accused of murder and on the verge of being executed. Once you know the twist, however, the film does not quite hold up. Maybe that’s because the agenda here is very simple and the characters often don’t see how cliched the situations they find themselves in really are. David Gale (Kevin Spacey), himself, somehow misreads a coed who is coming onto him, hard. The mystery angle and twist at the end definitely work, but it’s about the only thing in this movie that truly succeeds.

The Life of David Gale is a political thriller turned mystery. It’s a movie with an agenda and a very cool ending twist. Like many mysteries, however, once you know the twist, the movie doesn’t have a whole lot else going for it. So what does that mean exactly? It means that this is the kind of movie which is pretty good the first time you watch it, but just okay, at best, after that. It’s all about the suspense. Once you know the twist, the suspense is gone. And the movie is definitely manipulative and even a little annoying at times, (like all of those shots where the camera spins around, upside down, rotating, as a word flashes on the screen.)

The fact that this movie isn’t half as good once you know the twist says something. You would think that this logic would apply to all mysterious. After all, if the whole point is being surprised by the outcome. Then, once you know it, there’s no surprise left. And yet this logic turns out to not be sound at all. The best mysteries work on multiple viewings, because even if you know the twist, you watch again to see how carefully the clues were layered, in order to lead up to this twist. The smarter the movie the better the clues. Just look at The Usual Suspects or L.A. Confidential. These movies definitely work on multiple levels and on multiple viewings.  The Life of David Gale does not.

That’s probably because of how clunky the movie is. When Gale(Kevin Spacey,) has his way with a hot young coed, about half his age, fat a house party, or example, it seems all too obvious that there is an agenda. We might not realize it at the very start of the scene, but once this girl, Berlin, starts making demands, like “take me from behind,” or “bite my neck,” and “rip my clothes,” it becomes a little too obvious that this girl is up to something. Gale is supposedly a professor who taught at Harvard, and yet he can’t figure this mastermind of a plan out? Really? Does he actually think this woman is that into him despite him just being responsible for her getting kicked out of school?

Before we get to any of that, the movie opens with a woman named Bitsy Bloom, (Kate Winslet,) stopping her car short on an empty road, and then sprinting down the street. We have no idea why, of course. It’s a pretty pointless flash forward. The whole purpose of it, is that we will see more about this, and what led up to it, later. From here, we quickly cut to a scene of Bitsy trying to get her editor to sign off on letting her write a certain story. She plays the sexist card in regards to him not wanting to send her because she’s a woman, and that gets her the gig. The story is about Gale, this professor accused of killing a friend of his, named Constance, (Laura Linney.)

Bitsy goes to see the inmate, traveling to another state along with her intern. They notice that a man wearing a cowboy hat, who stays hidden in the shadows, seems to be following them. At the prison, Bitsy visits the death row holding area where Gale is being kept. There are all kinds of security rules and procedures here, (like no open toed shoes,) and the movie does a pretty good job of presenting the prison and layout of the place. From there, we finally meet the prisoner, David Gale. His lawyer helps lay out the days that Bitsy can come to interview Gale, making sure to note that she can’t come on Friday, because that’s the day of his execution. Gale tells her the reason why she is there is to tell the story of the man he was. He has a young son, and he wants his son to know all about him, and what he was like, before these accusations were ever made.

In hearing Gale tell his story to Bitsy, we flashback to a simpler time, when Gale was on top of the world. We see him as a professor in a large lecture all, presenting to his class. Gale has a very natural repore with the students and jokes around with them. He is teaching philosophy, and makes note of that girl Berlin, coming in right at the end of the lecture. She approaches him, looking for him to help her pass the class. She basically offers to do anything for the grade, and Gale flat out rejects her, telling her he would love to help her, but first she needs to study.

From here we go to that house party where everyone is getting drunk and making speeches or reciting poetry by the poolside. Berlin finds Gale inside the house and leads him to the bathroom, where she makes it clear that she has been kicked out of school and is no longer a student. By those grounds, she tells Gale, that he can sleep with her, and it wouldn’t be him sleeping with a student. He buys it, and the two of them go at it in the bathroom. The rest is history. The very next day, the accusations fly, and reports come out that Gale might have raped this girl. That’s what Berlin is saying, anyway. We hear about a vote among the fellow professors, by Constance, who was one of the members voting. She is the one who gives Gale the bad news that he is out. Whether it was rape or not, the whole thing looks very bad for the school, and they can’t keep him on as a professor.

From here, Gale’s life starts falling apart. He loved being a professor, and now that it has been taken away from him, he starts drinking hard. It gets even worse when his wife leaves him and takes their son away as well. Gale has to put the house up for sale, and he finds himself walking past college bars, drunk, ranting about philosophers to whoever will listen. Now, Gale wasn’t just a professor. He was also the head of an organization that stood for abolishing the death penalty. Constance also worked for this organization. Early on in the movie, there was even a scene where he and the governor of the state had a debate on a talk show, about the death penalty and whether or not it should be allowed. The governor ended the debate by challenging Gale to name one person who was wrongfully put to death by the law and then found to be innocent later on. Gale could not name any such example.

Now, after the rape charge and his wife and son leaving, Gale finds his life really falling apart. He is no longer the head of this anti-death penalty organization, and overhears people there talking about how they want him out. Gale is bringing them all down, with his alcohol abuse and bad behavior. We also start learning more, at this point, about Constance and the circumstances that led up to her death. One new discovery that comes out in the second half of the film is that Constance is not very well, health-wise, and has been dealing with a deadly condition for a while now.

The movie alternates between flashbacks of Gale and his life, and the story of Bitsy and her intern trying to put all of the pieces together. Neither story is great, but the combination of them gives each story a little bit of an extra push. Bitsy’s story is the one about the mystery, where tapes are being left for her, in her hotel room, that contain some very graphic content. I like the scene towards the end where she and her intern go to the house where Constance was killed (now owned by a woman played by Melissa McCarthy, in what’s got to be one of her first roles,) and act out all of the details of what might have happened. If only there had been more scenes like this, about really uncovering the mystery, this could have been a much better film. Instead, we get far too many scenes of the cowboy who stays in the shadows, leading to a usual, cliched kind of feeling. This movie is definitely entertaining, but it could have been a whole lot more. The end twist is great, but everything leading up to it is just okay.