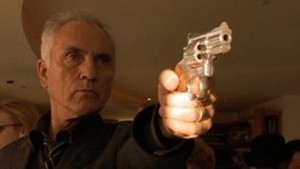 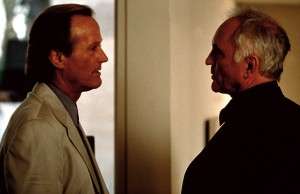 A very stylish, interesting movie about an older man turned assassin who goes after his daughter’s killer.

The Limey is one of the coolest steven soderbergh movies out there. that’s a big statement considering this guy is and has been one of the smartest movie directors of the past two decades. soderbergh is the guy who partnered up with george clooney and made a ton of movies with him, from out of sight (my favorite of theirs), to the good german, to the three oceans eleven movies. there aren’t many other directors that can line up the kind of cast that he had in all three of those films, but soderbergh is one of a kind. he’s someone who is always experimenting.

The Limey is certainly an experiment, the same way his movies full frontal, traffic, bubble, and haywire were as well. every one of these movies could easily have been a failure. and soderbergh knows that, but he keeps trying. he’s a risk taker by nature and never plays it safe, and that’s exactly why he’s such a unique talent.

The Limey is experimental because it features an old man as the lead. not only that, but this old man is playing a sort of action star in the film. and then on top of that, the old man is played by a not so major movie star. it’s terrence stamp playing the lead character wilson, and people who know stamp probably know him from playing general zod in superman II back in 1980. Sure, he’s popped up in cameos in movies that are more current, from wanted to yes man to the adjustment bureau, but none of these are his movies. he’s lucky if he has a scene or two in each one of them.

but The Limey was all his. the movie starts and ends with him and is built entirely on his performance as a cockney criminal out to set matters straight. only unlike the usual film of this sort, where the character has just been released from prison and is now out to get even, he’s not going after anyone from his former life. he’s not trying to take on the men who have wronged him and put him away, or anything like that. he’s after the guy who he thinks might have killed his daughter.

i say “thinks,” and “might have,” because what’s amazing here is that wilson really doesn’t know. he just has a gut instinct and uses that to convince himself that there was foul play involved with his daughter jenny. as the story goes, she was shacked up with a wealthy movie producer, named terry valentine (played by peter fonda). the two of them had a fight one night and jenny drove off. she ended up driving off a cliff on mulholland drive, and plummeting to her death. when asked why he doesn’t believe it, wilson says, “right, she fell asleep at the wheel.” he just can’t believe it, even though he really has no idea what kind of alcohol or drugs jenny might have consumed that night, if any.

so wilson takes a flight out to california and starts finding the people who wrote to him about jenny. there’s luis guzman who was one of her friends and leslie anne warren, who used to be her acting coach. wilson spends time with each of them and that’s where we get the story fleshed out about jenny and terry. and then we meet terry valentine.

this character is first shown to us in a montage that plays like a sort of movie trailer about terry. peter fonda was made for this part, playing a gentle yet powerful guy who made it in the business by being a survivor. fonda, of course, is a sixties icon, having been in one of the movies that piloted the whole hippie movement, easy rider, as well as countless other films. and in this movie, he gets to talk about the sixties. his monologue that compares it to a dream where you just fit in is pretty priceless.

the story gets to a point where it is a little too simple and straight forward and needs to throw something else in, and so nicky katt is added to the mix as a sort of low level hitman. his character might be kind of fun and different, but he is also unnecessary and a distraction to the main premise which is between wilson and valentine. There is definitely a strong reason for adding him in, giving us one more layer and complexity, but it doesn’t help our character get any closer to his target and to accomplishing his mission or finding out information.

what does help is the rampage he goes on when he breaks into the back offices of a loading dock filled with guys who terry valentine had some illegal business with. wilson goes at it, with nothing to fear and ends up shooting the place up. and the whole thing is shot so artistically, that we end up staying outside for all of the action and not really feeling like we missed a thing. that’s because soderbergh took us inside right before this to see the layout and the characters and give us a sense of what might be coming up later on.

artistic really is the number one characteristic of this movie. soderbergh uses a very unique strategy, over and over again, where he shows us tidbits of what is going to happen later on, long before it does happen in the story. this keeps us wanting to see more, excited for when those parts do come up. he even has scenes where we hear characters talking, but don’t see their mouths moving, and are being told that the conversation happened at a different time. at times it’s annoying, but more often than not, it’s kind of cool. and the music in this film is pretty killer. from the title song “the seeker.” by the who to “king midas in reverse,” you can tell that a lot of thought was put into every decision. there are definitely flaws with this movie, but ultimately it is something kind of special. it’s unlike any other movie, even if it does have a somewhat simplified plot. soderbergh makes style a major factor here and it carries the movie every step of the way.