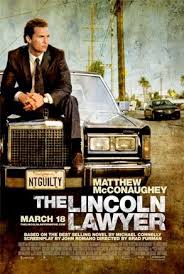 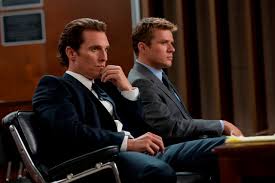 A Pretty good, twisty legal thriller similar to the John Grisham books turned into movies from the nineties.

The Lincoln Lawyer is a courtroom drama that brings us back to the good old movies they used to make in the nineties, full of fine actors and twisty plots. It reminds me of Primal Fear or A Few Good Men, although not nearly as good as either one of those. Still, it is pretty interesting and compelling and has a star-studded cast that handles the smart material very well. And it’s a lot better than most of the special effects garbage and recycled plots that come into movie theaters on a regular basis these days.

The movie is about a wisecracking lawyer who knows all the tricks in the trade. That’s Matthew McConaghey as Mick Haller, playing a lawyer again for the first time since his breakout in a time to kill (another one to add to those nineties classics). McConaghey was great in that movie and he’s pretty terrific here too. As an actor, he seems like a total California surfer beach bum dude, just like Keanu Reeves. And maybe he is, but he certainly plays a lawyer much better than reeves does (The Devil’s Advocate). Reeves, on the other hand, are best when playing a cool cop (Speed, Point break). For McConaghey, he’s best when playing a lawyer. that’s a major difference right there, and so The Lincoln Lawyer is right up McConaghey’s alley.

The movie starts with a number of scenes that show how Haller knows the system inside and out. he shows that he is able to manipulate both the rules of law, as well as his clients to get what he wants. He has a nice scene where his client won’t pay him and he tells the judge there is a missing witness so that his client will stay in prison until he pays up. All of this is establishing that Haller is a guy who knows the ropes. He’s seen it all and done it all and so when this movie pulls the rug out from under him, we know it’s something unique that’s going on.

Haller gets hired through bail bondsman john Leguizamo to take the case of billionaire playboy Ryan Philippe (Roulet). Haller goes to meet with Roulet and brings his own private investigator (William H. Macy) along. Between McConaghey, Leguizamo, Philippe, and now Macy, we’ve already got an all star cast at work here. Now add in Marissa Tomei, Michael Pena, and Bryan Cranston and this might be one of the greatest casts in years.

Roulet insists that he’s innocent and wants to go to trial and wants to take the stand. Haller agrees. and so the trial begins. and as can be expected, new material surfaces during the case and revelations are made that maybe Roulet’s story isn’t quite what it sounded like at first. there are secrets here that get uncovered, and it seems pretty clear that a number of the characters involved aren’t telling the truth.

On top of that, Haller himself is threatened and another character is killed. the tension certainly closes in on him. and then we get flashbacks to a previous case he worked, where his client, Michael Pena, took a plea bargain deal and is still serving time in a san Francisco prison. The case becomes relevant when Haller realizes that maybe the two cases are related and starts connecting the pieces together.

For much of the second half of the movie, we know who the killer is. normally revealing that information so early on in the film would be a call for disaster, but here there is so much happening, that it is but a small plot Point with much more mystery still to come. Since a legal trial is currently taking place, Haller finds himself the victim of the laws of our legal system and needing to find a loop hole around it in order to get at the guilty party. on top of that, we do get a new twist at the end involving a killer who we were not expecting.

The movie is called The Lincoln Lawyer, but Haller doesn’t seem to work out of his car as much as the title would have you believe. He does travel from place to place with a chauffeur driving him around, and it’s true he doesn’t have an office, but aside from meetings with a bike gang (perfect because they’re on the road anyway), he does most of his business in homes or courtrooms, just like any other lawyer. That’s fine, because if the movie kept us in the car with him for too long, it might have started to feel claustrophobic. Instead, it keeps him in there long enough to establish a relationship with his driver and to setup the bike gang so that they may enter into the story later on.

The movie works because it is filled with surprises. They come in a timely way, meaning that they are mostly unexpected and unpredictable. Some cast members are used well than others. I guess that was bound to happen considering how large the cast was. Michael Pena and William H Macy, both have limited screen time, but do fantastic things with their roles. And Marissa Tomei might not be memorable in this movie, but that’s only because she is trying to play the character like a real person and not like a cliché. Bryan Cranston could have been used better, but I guess his cop role wasn’t that big a part of the story, and he did what he could do with it. the same goes for john Leguizamo. so most of the cast members find themselves in limited roles. McConaghey and Philippe are the stars here, and they both deliver.

the movie does have a lot of fast talking dialogue and details. It is filled with characters, and that makes it occasionally hard to follow on a first viewing. It’s not that there are things we don’t understand, it’s just very clear that there are small things that we might be missing, and that there’s a reason to see this movie again and get more out of it. it kind of reminds me of an episode of the wire in that way. it’s a very clever movie, and while the ending might feel just a little too simple, it takes a very interesting and often edge of your seat journey on its way to getting there.