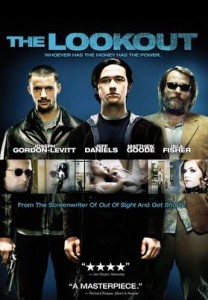 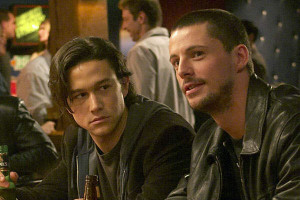 A pretty cool bank heist movie with a strange and conflicted main character.

The Lookout is a cold, wintery bank heist movie where the heist takes place in the middle of the night when nobody is really around. that’s the main premise of the movie anyway. or maybe the premise might read…a young man with problems remembering things and fitting into society gets roped into doing a bank heist in order to fell a part of the cool kids group. it seems like there are really two things going on here, in this movie. there’s the character and all of his problems, and then there’s the bank robbery plot.

The movie begins with the scene of an accident. we watch as promising hockey star Chris Pratt (Joseph Gordon Levitt), is driving a car with his girlfriend and another couple in the back seat. chris turns off the lights of the car as fireflies rush all around them, making the scene pretty cool. it is just blackness and lights, and it seems very surreal. but when he turns the lights back on, he sees something up ahead of him that he just can’t avoid. and so a huge and deadly accident is the result.

We jump forward in time to a number of years later where chris is dealing with memory issues. his voice over takes us through a day in his life, but he does it over and over again, trying to remember the different things that he does each morning. “i wake up, i get out of bed, i wash my face with soap…” that sort of thing. we get to hear at least three different versions of it, each one changing in just a few details. there are vibes of memento here, with this guy clearly having some kind of memory or sequencing issues. and the voice-over introduction to the problem just makes us recall memento even more.

But then we start to get involved in chris’ life and meet the characters he associates with. there’s the therapist who he makes inappropriate comments to because he doesn’t know how to be socially acceptable anymore. then there’s his friend, lewis, played by jeff daniels. lewis is a blind guy who is chris’ much older roommate. they have a sort of deal where the two of them live together and help each other out. lewis might be blind, but it often seems he can do things a lot better than chris. like a scene where chris falls apart trying to open a can of tomatoes until lewis comes along to help.

lewis helps chris with his memory issues as well, giving him exercises like a retelling of the story of goldilocks and the three bears. lewis’ advice is to start at the end and then work backwards. i don’t know if there’s any truth to this method, but it certainly works out well for the movie, because later on when chris gets tangled up with the wrong guys, he starts thinking about where he wants to end and then figures out what he needs to do to get there.

also in the first part of the movie, we get scenes of chris working at the bank, wanting to move up from being a security guard to being a teller. he has a fake cash register that one of the other tellers has given him, and he has been practicing. but the manager of the bank doesn’t take him seriously because of his disability. and then there’s also a family dinner for thanksgiving, where we get to know chris’ parents and watch as they belittle him.

all this leads to why he might want to join up with gary spargo (matthew goode) and his group of thugs. we know gary spargo is bad from the moment we see him because he’s sitting in a car with some other guys, eyeing chris in the bank, and talking about him. spargo has even got an inhaler that you can only see him using in shadows, while in the car, making him look kind of like dennis hopper’s villain in blue velvet. and spargo approaches chris in a bar one day, pretending to know him from high school, and to have once dated his sister.

spargo starts inviting chris to come out and hang with him and his boys. and there’s more incentive than just a bunch of new friends to hang out with here. there’s also isla fischer, (wedding crashers), as a part of the group who is there to seduce chris and string him along. she sleeps with him, despite his social flaws, and gets him interested in being a part of the group.

while we know where this movie is going and that all of these guys, (including a long haired, sunglasses wearing nut named bone), are bad, the movie still keeps us entertained. that’s because we don’t really know where chris fits into all of this. he has every reason to be a part of this gang, from his lost stardom in his youth, to his father refusing to give him money or take him seriously, to his manager refusing to consider him for a higher job.

the bank heist is fun because it moves quickly and doesn’t draw things out. and i also liked that the movie continued on and had more to it’s plot after that. in a sense, the heist was only the beginning. i like that the lewis character gets involved with the criminal element here, so that chris’ worlds can collide with each other and both fall apart at once. the movie was written and directed by scott frank, a man who has proven himself to be a talented writer time and again with movies like out of sight and minority report. The Lookout isn’t great, because it is somewhat predictable and in a lot of ways often feels like something we’ve seen before, but it is still entertaining and fun. and it is very well-made. there’s a whole bunch that this movie gets right, going all the way up to the scary, quiet villain who sits in the corner of the room, and lets you know he will kill in a heartbeat if he wants to. it’s a good movie and it moves along at a nice, quick pace that keeps you wanting to see more.