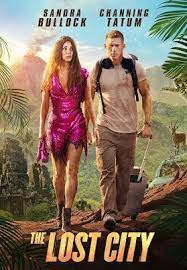 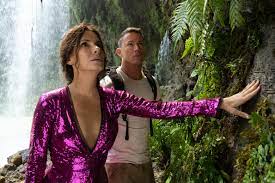 A cute premise turns into a very familiar and predictable movie pretty early in, and never finds its way back.

There was definitely potential here. A movie about an author whose real life imitates the story she is writing for her new novel, as she finds herself being kidnapped and brought into the jungle, could have worked. Unfortunately this is not that movie. It’s in no way about the story she is writing, and instead is very simply about her survival in the jungle alongside the man who comes to rescue her, and is equally out of his element. This is a basic romantic comedy, when it could have and should have been something much better.

The premise for this one was there. Kind of. The idea here is about a novelist who gets kidnapped, and her model ends up being the guy who comes out to save her. It’s kind of thin on the surface, but the angle that does work is the reason why she’s kidnapped. Loretta Sage (Sandra Bullock,) actually puts in the time to do real research and translations of ancient languages when writing her books. And a wealthy treasure seeker realizes that the material in her books are actually based on real legends. And so he believes she can help him locate an actual buried treasure.

It’s enough of a story to get us into the jungle on an adventure. We’ve definitely seen this sort of thing before, in movies like Romancing the Stone, about a mismatched pair (Kathleen Turner and Michael Douglas,) in the jungle trying to survive. The only real difference here is that this time the protagonist is a novelist and her savior is her model. And that’s a very strange and creative situation and dynamic.

Sage writes romance novels. She imagines herself as the star of them (as a character named Doctor Angela Lovemore, who looks exactly like her.) And the male, hunky figure with the long blonde flowing hair is Dash, played by actor Alan, who is basically like Fabio (Channing Tatum) These are cheesy books that women are obsessed with, and that nobody takes seriously. They are guilty pleasure books. Which is why it’s so unexpected that they are based on actual research and history.

Before we get to the kidnapping, we are with Loretta as she is writing. We watch a scene play out of Lovemore and Dash in a cave, surrounded by snakes, Indiana Jones style. And Loretta told her eyes at the ridiculousness of the not eating the bad guy and only going after the good guys. Suddenly the snakes vanish. We are back in the real world where Loretta is sitting at her computer, hitting delete. If the movie could have been more of this, it would have been cool. If it could have been about finding the right story, or figuring out how to make the story of her novel work, (something like Adaption,) it have been something special. But unfortunately this opening scene is also the last we see of Loretta writing.

It’s also the last we see of her fictional characters. Whatever story they were involved in, where they ended up in a cave surrounded by armed terrorists and snakes, is long gone. And that’s a shame, because another way this movie could have worked would have been to tell us two stories at once (the story of Loretta on her adventure in the jungle, and the story of her characters in the novel,) and to have both stories mirror and parallel each other in some creative ways, as they both continue to unfold at the same time. But this movie doesn’t go for that angle either.

Instead, it simply goes for the romantic comedy angle of two people who hate each other (kind of,) realize they were wrong and fall in love. And even with that cliched and played out agenda, there is still a decent first half. There are some okay laughs during this half, including a scene where Loretta and Alan share the stage for a press junket and she has more than a little difficulty getting up into her chair. Loretta is wearing a ridiculous skin tight outfit and she rolls her eyes every time the audience of nearly all women swoons over Alan. Loretta even manages to accidentally pull Alan’s wig off, revealing that he doesn’t even really have long hair. All of this physical comedy is kind of fun. It’s nothing great, but it’s enjoyable enough.

And then Loretta gets kidnapped. Daniel Radcliffe shows up as the villain to explain the reasons why he is kidnapping her, and what he needs her help with, and suddenly nobody knows where Loretta disappeared to, except for Alan. This guy might not be the brightest bulb in the shed, but he’s the only one with any idea of what happened to her. And he hires an ex-military man who he once knew, named Jack Trainer, (played by Brad Pitt,) to get Loretta back. Trainer heads out to the jungle and takes Alan along.

Brad Pitt’s appearance in this movie is apparently the part of a favor of friendly cameos made between he and Bullock. She cameoed in his movie, Bullet Train, and he returned the favor by cameoing here. And the irony is that the action Pitt has in this movie, in about five minutes of screen time is better than any of the action he’s involved in in Bullet Train. So, yes, the action here with Pitt is pretty good. This guy uses precision and speed to take down a whole army of kidnappers. And if somehow there was either more action like this interspersed throughout the film, or if Pitt was in it a little longer, this might have been a better movie.

And that’s really the problem. Whatever works in this movie is very short-lived. The opening scene in the cave with Loretta writing her story as we see it happening in real time works. And then it’s over and we never see anything like it again. The comedy routine between she and Alan and her fans while on stage promoting her new book works, but then we never see any comedic material on this level again. And finally, the action with Brad Pitt works. But it is also only in here for a couple of quick scenes and then it disappears from the rest of the movie.

It’s a sad state of affairs when there are so many ways that a movie could have worked,  and then it taps into none of them. It’s even worse when the movie shows that it knows what these ways are, and hints at them, showing us a mere flash of each one, only to not pull the trigger on any of them, and actually take them the distance. This movie settles for a routine story in the second half, which is a pretty big disappointment considering what the first half was doing. That first half was never great, but it was trying. It was making the effort. If only the second half of the movie had done the same.