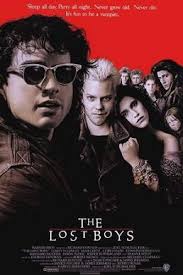 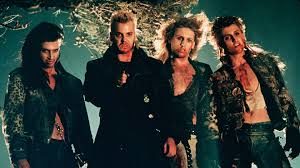 An eighties horror  classic that is as much about atmosphere and humor as it is about storytelling, this one really works.

This is the perfect eighties horror movie. Most people think of the popular eighties movies as John Hughes teenager films focussed on dating and highschool, from The Breakfast Club to Ferris Beuler’s Day Off. If those movies are about the innocent upper class teens, than this movie is about the bad boys of the eighties. This one has plenty of humor, but it’s also a much darker film than one might expect. It captures the atmosphere of this party city that prominently features a boardwalk and amusement park, perfectly. And the actors here hit all the right strides to breathe life into the characters living this story about a group of vampires who don’t just terrorize, but they also fascinate and seduce, until one of the good guys is faced with the temptation of joining them. It’s a lot of fun.

The Lost Boys is one of those eighties movies that completely captured what the teen era eighties were all about. It’s the Breakfast Club of horror movies. That means it’s got the music, the humor, the tone, and even the teen icons. This movie features Keifer Sutherland, Jason Patrick, Jamie Gurtz, and the two Coreys – Corey Haim and Corey Feldman. It’s a fantastic lineup of who’s-who eighties stars. And for the most part, they are all delivering, giving us the kinds of performances that we hope for and love to get from these specific actors, (especially the two Coreys.) The movie has a lot going for it, including scares, twists, jokes, and plenty of fun.

It all starts with atmosphere. This movie oozes atmosphere out of its pores. By atmosphere, I mean tone. The setting, the music, the style… all those good things. Here, the setting is Santa Carla, a Beach town in Los Angeles. There are basically only two locations in this movie… the house and the beach. But this movie gets a whole lot out of the beach, mainly in the Boardwalk area. That’s where the teenagers hangout, and that’s where all of the trouble happens. The movie begins with moving shots flying over the water and leading right up to the boardwalk and amusement park, at night. This shot is repeated throughout the film, and is meant to represent the point of view of our vampire characters, flying around in the night sky. Only we don’t know that yet. At the start of the film, we get a quick attack from something or someone that comes out of the sky, (all we see is the point of view of the attacker, so are never really sure who or what it was that caused it,) but then we get a cut to daytime and the Doors song, “People Are Strange,” played to scenes of a family driving into town. It’s the perfect song to show off this strange community full of misfits.

This family is composed of two brothers and a mom. One of the brothers, Sam (Corey Haim,) is much younger than his older brother Michael, (Patrick.) Think of it is like Michael is in high school and Sam is still in junior high. It makes a difference because Michael spends the movie hanging with the cool kids, while Sam spends it hanging with the comic-loving nerds. And this all makes for good humorous fun. The mom is Lucy, (Diane Weist,) and she moves the family in with her father, an elderly taxidermist. Lucy has just gotten divorced from the boys’ father, and she is newly single. And you get the feeling they are all escaping a bad situation with the father, whether it was abuse or neglect, just from the way that he is barely ever mentioned, and certainly never mentioned with affection from any of them. The only real clue we get about anything in this department, is that Lucy made more money than her ex-husband. As her father says, she’s the only woman he’s ever known to come out of a divorce worse off financially than she was before she went into the marriage. It’s a very eighties thing to say, about women and working, and it helps set the tone and atmosphere about who these characters are.

But the story here isn’t about Lucy or her divorce. It’s about the kids. These teenagers are the stars of the film, and they own the spotlight. After settling into the cabin home of their grandfather, which is incredibly strange with all the taxodermy everywhere, the two brothers decide to hit the boardwalk. They stay together, scoping out the scene, which includes a carousel that only has teenagers and adults on it. This is that kind of the place. It’s a night time party scene for teens and adults. Nobody is taking their little kids here at night, and maybe that’s because Santa Carla is the murder capital of the country. That’s what the movie continues to tell us, anyway, first on a billboard, and then in a discussion with the grandfather. Everybody knows what goes on there, and yet they continue to go to the boardwalk each night anyway. You have to imagine there’s a whole lot of drinking and drugs going on… why else would adults be riding on a carousel at night?

While on the boardwalk that first night, the boys see a concert being performed by a muscle bound shirtless singer who belts out notes on a stage with open flames. That’s when Michael spots Star, (Gertz,) and the two of them both catch each other’s attention. When she goes running off, Michael wants to follow her. He checks with Sam first, who is okay with it, and so he and Sam go separate ways. Michael follows Star to a bunch of bikers. She gets on the motorcycle of David, (Sutherland,) and the group drives off. Meanwhile, Sam finds his way into a comic book store, where he is approached by the Frog brothers, Edgar Frog (Corey Feldman,) and Alan Frog. These two dress like Rambo and take vampires very seriously. They try to get Sam to take the vampire business seriously too, and push comics onto him which they say are grounded in truth. Only Sam looks at them like they are nuts, and tries to get away from them as fast as he can. And this is classic Corey Haim humor. He is absolutely perfect in the role, and this business with the Frog Brothers is just the first example.

The next night brings the boys back to the boardwalk again, and this time they get a little closer to the people they just met. Lucy hits it off with a store owner named Max, who was impressed the day before with the way Lucy helped a lost boy find his mom. Sam gets approached by the Frog brothers again, this time with not only a new comic, but a phone number to call in case he needs help dealing with vampires. And Michael is brought into the group of bikers because of his attraction to Star. He wants to know who these guys are that she hangs out with, and likes the fact that they are welcoming him into their group, as opposed to ridiculing him or giving him a hard time for stealing Star’s attention. It is Michael who gets the best story at this point, as the gang invites him to their lair, an abandoned luxury hotel that sunk under the ground during an earthquake, and now serves as their hideout. The boys offer Michael a bottle to drink from and he obliges, not realizing that what he is drinking is actually blood.

The next morning, Michael wakes up feeling incredibly hung over. Turns out, he is becoming a vampire. When nighttime falls, and he has to stay home, babysitting Sam, while their mom goes out for a date, all hell breaks loose. Michael basically transforms. And the movie takes its time with this, having strange things happen to Michael, little by little. It’s very different from other movie transformations of this time period, like Teen Wolf, where Michael J. Fox basically went into a bathroom and transformed into a werewolf all at once. The vampire transformation, if you can even call it that, in the Lost Boys, is more like what happens to Jeff Goldblum in The Fly… it is very gradual. And we get to see Sam’s reaction to all of it, which is just priceless. “You’re a bloodsucking vampire, Michael.”

Michael never becomes a villain though, and that’s important. In fact, he never becomes a full vampire, but only half, (just like Star.) You don’t become a full vampire until you make your first kill. Michael is caught in between the human and vampire world. He likes hanging out with the biker guys, and especially with Star, but he doesn’t want to be a vampire, and is up for helping his brother put a stop to it. Sam calls the Frog brothers and gets them in on the situation. That includes coming over to his house for dinner one night, when Lucy invites her date, Max, who the boys all suspect is the leader of the vampires. They try everything they can think of at this dinner meal, including dumping garlic all over Max’s food, and throwing holy water on his lap. But nothing works.

So the boys go after the vampires in their hideout. It’s during the daytime while they are all sleeping, hanging upside down like bats. The Frog brothers stab one of the vampires through the heart and barely escape without being killed themselves. Michael gets Star and the little boy she hangs out with, who has also been turned, to come to his house. He knows that night the vampire gang will be coming for him. And so he and the Frog brothers, and Sam, all get ready. The setup for this climax is fantastic. It involves the boys dressing up for the night, (this is where they really look like Rambo,) and even stopping by a Church to fill up on holy water, despite a wedding going on at the same time.

And then we are at the climax, and it’s a lot of fun. It even includes a twist. Lost Boys might not be hysterical or packed with amazing action, but it’s certainly a fun movie. This one captures tone and atmosphere in a way that is very distinctly eighties, and makes you want to be transported to this very strange place and time. Characters aren’t what you would expect, and that makes a big difference. Michael never becomes evil, but always remains most loyal to his mom and brother. And the head of the biker gang, (the head villain,) David, never does anything terrible to Michael. He’s not a cliche of a bad guy, but instead, is hoping to entice Michale and lure him into their group. This movie is definitely entertaining. It never quite crosses over into excellence, but it sure is a lot of fun.