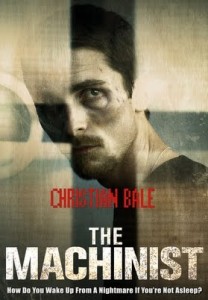 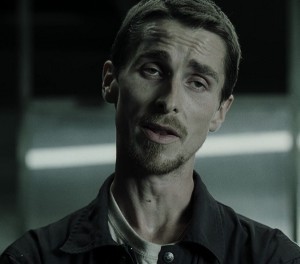 It’s Fight Club meets Memento, only all bleached white and not quite as good as either one of those films.

The Machinist is a very dark movie. It’s a movie that christian bale lost massive amounts of weight for, in order to play a skin and bones insomniac. this character, trevor reznik, doesn’t sleep. he can’t sleep. he hasn’t slept in a year. and his only social interaction is with a prostitute (Jennifer Jason Leigh), who he pays for, and also befriends. since she is the only one he really associates with outside of work, she is his only friend.

trevor also goes to the airport every night, where he sits at a coffee shop and flirts harmlessly with the waitress. he’s there every night though, staying there the whole night, and so she knows there’s something wrong with him. outside of work, the movie really just bounces back and forth between the waitress, the prostitute, and trevor on his own, at his apartment.

But then there is the situation at work. trevor is exhausted all the time and looks it too. he works at a machine factory where men have to trust each other, sometimes with their lives, as they work on fixing powerful machines. two cast members from the wire are some of the employees, joking around in the locker room early on, while trevor just watches.

but the jokes stop when another man at the factory is hurt and trevor is to blame. he was supposed to be watching something and instead, he hit a button that got this other man’s hand cut off. now the man, miller, can’t work anymore, and all the other employees have a problem with trevor. they don’t trust him, and rightly so.

as if all of this wasn’t enough, there is a man named ivan who introduces himself to trevor as a new employee there, taking over for somebody who left. only when trevor mentions ivan to his bosses, his bosses tell him that there is no such person. this is where the fight club stuff starts to kick in. that and the insomnia.

the first half of the movie is the strangest because we don’t really know where it’s going and have a hard time figuring out what to make of it. It’s extremely dark and trevor has his shirt off for a number of scenes as if trying to keep the image in our heads of just how skinny he is. the movie keeps itself interesting at all times with the miller accident and trevor being the responsible party, but there is still confusion as to where things are headed.

but then in the second half, everything comes to light. we realize all to quickly that we are in a movie that wants to be a modern day hitchcock film with clues being left all over and intricately placed. something happened, and the clues are there to help us figure out the puzzle just as trevor does. eery music plays, carrying us along, and there are camera shots here, like point of view shots while driving a car, that are directly out of hitchcock movies.

Some of trevor’s clues get written on post it notes. either he’s writing them or someone is messing around with him and putting the post it notes around for him. one of them is a hangman game with trevor constantly guessing at what a single word might be. each guess is not only meant to lead trevor in a certain direction, but is also meant to manipulate the audience.

the movie goes on to have trevor take out the waitress and her son for a day at an amusement park. this boardwalk ride paradise, like a coney island sort of place, features a number of rides and goes in detail on one of them. the house of horrors with trevor and nicholas (the son of the waitress), going on the ride together. it’s a wild experience with a shocking ending.

All of the clues left around are where this movie is like memento. that and the fact that there is something that trevor is trying to remember, but can’t. for hitchcock fans, it’s a modern take on spellbound where gregory peck can’t shake certain images from his head, but has no idea what they might mean. in The Machinist, the bleached white of the movie adds to the tired, unpleasant tone and way the character is feeling.

the final realization of the movie is a good one and worth the wait. that’s if you haven’t guessed it already. this movie does give the viewer enough clues to figure it out, and that’s a good thing. there is no cheating. it’s a complete mystery and puzzle of a movie, and while it isn’t exactly a feel good or happy tale, it is certainly artistic and enjoyable. like the haunted house that trevor goes to, this movie is a ride. it’s got an interesting path, all the way to the end.