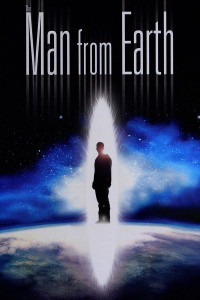 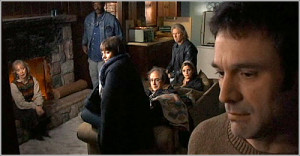 The Man From Earth is about as unique as movies get. the whole movie takes place in and outside of one cabin with a bunch of guests sitting there having one very lengthy conversation. this subject matter sounds terrible, like it would be an incredibly boring film, but as it happens it’s the exact opposite. that’s because this movie, believe it or not, is more like a thriller than anything else. it is sci-fi of course, but the story that one character tells is so well structured with the inclusion of its twists and turns, that at times it feels like edge of your seat suspense.

the movie starts with a bunch of characters arriving at the cabin as the man who lives there, john, is packing his truck. he’s leaving, moving out, and going to another place. he hasn’t decided where just yet. john is a professor at a university and all of his friends who arrive at the cabin are professor’s as well, each of a different subject. these are some of the brightest minds in their fields and they are about to be thrown for a real head scratcher that not a one of them can disprove.

John reveals that he has been alive since the cavemen era. he was a cavemen back in that time. he has lived for thousands of years and never ages. at one point he did, but then when he reached the age of about thirty-five he just stopped aging and stayed that way. he has lived multiple lifetimes, one after the next, constantly on the move. every ten years he relocates in order to avoid suspicion from others about why he is not aging.

this might sound silly, but the screenwriter is well aware of that, and lays it on us just right. the way john reveals his story is pretty well-thought out. he starts by telling them a hypothetical story. imagine there was someone who… could it be possible if…that sort of thing. and the professors debate the question and decide that it is an interesting subject for a sci-fi story. they ask john if this is something he plans to write, but he never answers. instead, he lets them take turns debating the idea based on their field of knowledge and only when christopher columbus comes up does he chime in. he tells them, “i had the opportunity to sail with him once, only we weren’t sure if he was going to fall off the earth, so i didn’t go.”

now, suddenly everyone sits up. they do a double take. if john were to start laughing, they would all think it was a funny joke, only he doesn’t. instead, he keeps going with it. they ask him more and more questions and for every one of them he has an answer. he tells them about how he has learned to adapt with different cultures. he also has plenty of name dropping stories about how he has been around some of the great minds of history. that part is a little too unbelievable. just because somebody was alive at a certain time doesn’t mean they brushed elbows with the celebrities of that time. unless he was in politics or something, he doesn’t really have a reason to have been around these people, the way, say, owen Wilson does in midnight in paris.

still, the plot here is intriguing, especially with the way these genius professors end up believing or at least acknowledging the possibility of it all. one guy gets so frustrated and uncomfortable that he calls up a psychiatrist to come over. the psychiatrist has the power to have john committed for observation if he thinks the man is crazy, and so that adds a whole new element to this thing.

in a sense this movie is kind of like an interview. like a fake documentary, where for nearly the whole film john is on the hot seat being questioned by his friends and telling them stories of his life. and the stories cover a lot of world history. john talks about mesopotamia, for example, and king hamurabi who wrote the first law code in the days of babylon.

but as interesting as john’s story is, what is equally as interesting is the way his audience reacts. some of them are more inclined to believe him then others. the black guy, for example (the man with the very deep and very recognizable voice from final destination and candyman), seems like the most rational, yet the most open about accepting his friend and not jumping down his throat over this story. another character freaks out as soon as religion gets mentioned and john starts telling stories that conflict with the bible.

like any great movie about characters trapped in a house together, or just spending a lot of time together (often they are stuck in the middle of a murder mystery), these characters turn on each other. the blood starts to boil when one character fakes that he has a gun and then later on pulls out a real gun and threatens to use it. and all of this leads to more and more surprises.

by the end of the movie we get one final surprise involving on of the guests there, and it just caps everything else off. this movie is extremely creative. it basically takes the formula about guests being invited to a house to participate in some kind of murderous event (and then there were none, clue), and turns that upside down, so that the main character who invited them can reveal a secret about himself, instead of one about them. the movie is so smart and so well written that each new revelation is handled with great delicacy. nothing comes out easily and that’s important, because it adds to the credibility of this whole thing. when asked about religion, for example, john tries to sidestep and avoid the topic for as long as he can before finally breaking down and giving in. this is a very cool movie.