The Man With Two Brains *** 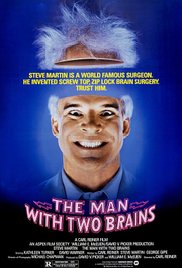 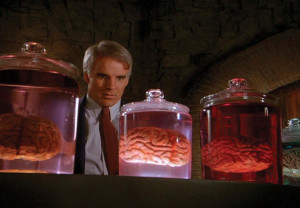 A wacky comedy that works in terms of jokes and has an entertaining story, but just gets a little too simple in its final act.

This is a funny movie with a completely bonkers plot. At least in the second half. And that’s not a bad thing. The crazy storyline or direction that this story ends up going is what makes the film stand out as unique. The first half of this movie is all about a bad marriage, con-artist hustle situation. A woman gets a brain surgeon to marry her, convincing him that the two of them are in love, when really she’s got a hidden agenda of malice and betrayal. That’s an interesting enough story, but it’s also one that we’ve seen before. What happens in the second half is where the movie goes off the usual path. The brain surgeon is invited to a lab where he finds that brains are being kept alive and can be put into other people’s bodies. One of them even starts speaking to him. There is a ton of humor in this movie, and it doesn’t always work, but between the wacky plot and the jokes that do work, (which is most of them,) this movie has a good thing going for it.

The Man With Two Brains is a great Steve Martin movie. This guy was really at his peak in the eighties with movies like Roxanne, Three Amigos, All of Me, and this. He had one of the sharpest comedic minds around, and in the case of this movie, he cowrote the screenplay. The film is about a wacky brain surgeon / scientist. It’s also about a con-artist romance situation. Think of it like the War of the Roses meets Reanimator. Ironically Kathleen Turner plays the angry wife in both this film and War of the Roses. Here, there are two storylines front and center, and they each represent about half of the movie.

The first storyline is about the marriage. The second one is about the brain situation. In that first storyline, we meet Dr. Michael Hfuhruhurr  (the movie has plenty of fun with this name,) as he is being interviewed during a car ride. He speaks arrogantly about himself, claiming he should be remembered alongside the greats of all time. Meanwhile, we also see a wife arguing with her much older husband. The wife is Dolores Benedict, (Turner,) and she is trying to get her husband to have a heart attack so that she can collect the money from his will. Benedict ends up running out into the street and getting hit by Michael’s car.

Michael rushes her to the emergency room and performs brain surgery on her. The head of the department at the hospital doesn’t like the idea of the man who hit the patient in his car being the same one who operates on her, but Michael insists there’s only one other man he would trust with this, and that man is dead. We get to see what happened to him, in a hotel in Switzerland where an elevator murderer is targeting brain surgeons. This will come into play later on in the movie. And so Michael performs his operation on Benedict.

The surgery is a success and Benedict quickly returns to her usual self. Only she and Michael form a relationship while she is in the hospital and get married shortly afterwards. There are some great moments in the hospital patient recovery room where Benedict does inappropriate things to Michael and a nurse walks in to see them. Both times, Michael quickly makes up an excuse. The first time, it’s why his finger is in her mouth. The second time it’s why her hand is on her belt, pulling at his pants. He says he is testing her grip. Both times the nurse rolls her eyes and walks away.

About half of the jokes in this movie work and half don’t. The ones that don’t aren’t terrible or cringe-worthy or anything, they are just more in line with a parody film like Airplane or Scary Movie. We are talking about things that are so slap-stick oriented that they are pretty ridiculous, like Michael asking for a sign from his dead wife, if there’s any reason why he shouldn’t marry Benedict and the whole house shaking, paintings spinning, and things flying around, only for Michael to not notice a thing, and go right back to asking for a sign. Another example has Michael go to visit that head doctor in his office and be so stressed that he puts his arm through walls. Now, later on, a similar joke takes place and it works. In the second half of the movie, Michael finds himself in a hotel room where he constantly puts his arm through walls or walks right through doors. The reason why these scenes work and the other one didn’t  is because the movie takes the time to establish that the walls here, at the hotel, are paper thin, and continues to reinforce that idea in the dialogue.

Michael takes his new wife, Benedict home and is ready to bed her. Only she doesn’t quite feel the same way. Even at their wedding, when the officiant told him to kiss the bride, Benedict turns her cheek away and refused the kiss. Now she claims she’s not feeling up to sleeping with her husband and makes every excuse under the sun. It reminds me of the opening scenes from Heartbreakers, with Sigourney Weaver putting Ray Liotta through the mill by refusing to have sex with him, as he ran around in circles trying to please her in order to make it happen. At one point, Benedict does promise that tonight is the night if Michael can get home in time, and so he rushes through two brain surgeries, performing them both at the same time.

Benedict is up to no good. She not only refuses to sleep with her new husband, but she cheats on him with a gardener and then fires another gardener who sees. She wants Michael’s insurance money, the same way she did from the man she was running away from at the start of the film. But then something happens. She answers a call for Michael, which tells her that he had an aunt who just passed away and left him a fortune. That’s when she decides to finally sleep with Michael and make him happy. Even before this, when he was catching onto her and ready to file for divorce, Benedict came up with a plan to fake suicide and go stand on a ledge outside of the window. Michael had to climb out himself, to rescue her, (the hand licking in order to stick to the wall idea is pretty dumb.)

At this point, we are more than halfway through the movie and there is not indication of where the movie gets its title from or what it really has to do with brains. Michael is a brain surgeon, sure, but with the storyline so far, he could have been in nearly any line of work. But then something happens. He meets a wacky mad scientist who wants to hire Michael to do experiments in his lab. Michael flies out to the lab (which is in that same hotel with the elevator murderer in Switzerland,) and sees that inside the hotel room is actually a castle. And inside the castle are a ton of brains sitting in pools of water in jars. On top of all this, one of the brains starts talking.

Michael hits it off with this brain immediately, and suddenly the movie has taken a very different turn. The brain belongs to that of a woman who couldn’t be more sweet in her conversations with Michael. He sings with her and tells stories to her, and they fall in love. At the same time, Michael figures out what Benedict is up to and that she has it in for him. So here he is, married to a woman who hates him and in love with a brain and a woman who has no body. What a situation. With all the craziness this movie has going for it, it’s a real shame that everything leads to such a simple and predictable conclusion. Still, as far as plot goes, it’s the only real weak part of the movie.

The Man Who With Two Brains is a very out there comedy. Martin was clearly looking for this sort of thing at the time, because his film All Of Me was also about an out-of-body experience. In that film, he was trapped inside a woman’s body. In this film, a woman’s personality is trapped inside of a brain. This is a fun movie filled with jokes. They don’t all work, but between the ones that do, and that very out there story line, this film has a lot going for it. The story does get a little too ridiculous at times, and whole ideas that could have made for interesting sub-plots, (like the elevator serial killer who is rushed over once the characters finally do make it to Switzerland,  ) aren’t given the time they deserve. So there are definitely things left to be desired, but for the most part, this movie is a lot of fun.