The Many Saints of Newark *** 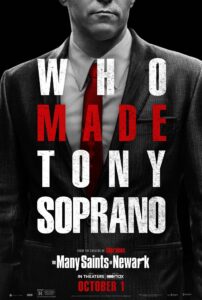 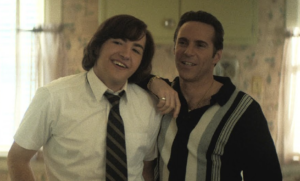 A nice glimpse at some of the events that took place before Tony Soprano became the icon, this movie does a lot right, but also leaves plenty to be desired.

A pretty good prequel to the Sopranos, this one does not cover everything that one might have hoped for, but it certainly does a lot. It’s more the story of Dickie Moltasante (Christopher’s father,) and how he was a major influence on Tony’s life. But Tony is definitely not the protagonist here. This is definitely Dickie’s story all the way, and he gets into all sorts of trouble. The movie includes a new story about a rival gang, but despite this angle about a group we have never seen or heard of before, the movie still gets in enough Easter eggs and nods to the series that we care.

The Many Saints of Newark isn’t a great movie, and it’s not all that we hoped for when news broke of a Sopranos film, but it is certainly good enough. The Sopranos is the HBO show that single-handedly launched the golden age of television. Sure, there were other shows that helped, from The Wire to Mad Men to Breaking Bad, but it all started with the Sopranos. That’s why it’s still considered sort of the golden child of HBO. And the series still holds up today, as it chronicles six seasons in the life of Tony, (James Gandolfini,) the head of a New Jersey mob family. But the problem is that actor Gandolfini passed away. And even if he hadn’t, the show ends with the distinct possibility that maybe his character was killed, to the point where even if Gandolfini was still alive, they were never going to make a direct sequel.

With that in mind, what we got here is the next best thing… a prequel. A movie that tells about Tony and his growing up, and how he came to be a mobster. Only it really doesn’t. In this film, Tony is a side-player and by the end of it, all we have are the inklings of things that most likely lead him down the path to becoming a mobster. Basically, the left this one open for a sequel (which may never come, considering the poor box office receipts of this film,) and a whole ton of events we’ve heard of and were hoping to see here, which instead can be featured in this hypothetical sequel. Namely, how Tony got involved in crime, the notorious card game that he and some of his buddies robbed, and finally what ended up happening to his father, Johnny Soprano, and how the man was killed.

To be fair, it would have been too much for this movie to have tackled all of those things. Especially the death of Johnny Soprano. That’s because we already have one older mentor figure who takes center stage of this film, and who is sort of the first bread crumb to leading Tony down the path he will one day be in charge of… Dickie Moltasante. That would be the father of Christopher (Michael Imperioli,) the character who was Tony’s nephew on the Sopranos. We heard about Dickie Moltasante from time to time on the show, and here in this movie, we see his full story, and really get to know why he was such an important part of Tony’s life. In fact, the movie even opens with the voice-over narration of his son.

That’s right. Imperioli himself narrates the movie from beyond the grave, and that’s how the film begins. Now this is an incredibly questionable decision, as it pretty much gives away the biggest twist in the Sopranos show. Not so much that Christopher died, although that’s certainly part of it, but exactly how he died. Who killed him. Christopher’s voice tells us the details on all of that, essentially spoiling the show for anyone who hasn’t seen it. So this is not the smartest decision to feature right at the very start of the film, if indeed anytime at all, but that being said, it’s pretty cool having Imperioli back. He’s the one returning cast member in the entire film, and it’s pretty nostalgic to hear his voice and even hear him speak a little bit about the events from the Sopranos. So featuring the character in this way is both a plus and a minus, and I suppose the positive of having him back for nostalgia reasons might just outweigh the negative of giving spoilers from the show away.

While Imperioli is the only cast member who comes back, we certainly see some of the characters we are familiar with from the show. The two biggest ones would have to be Tony’s mother, and Uncle Junior. Both of these were major characters on the TV show, and hear we see much younger versions of both of them.They are also played by prominent actors, as is Johnny Soprano. He’s played by John Berenthal (the biggest actor to make it out of the Walking Dead TV series, and propel his role there into being a movie star.) Aside from Berenthal, we’ve got Corey Stoll (Yellow Jacket in the first Ant Man film,) as Uncle Junior and Vera Fermiga as Lyvia Soprano, Tony’s mom. She dons a prosthetic nose for this character, making her look incredibly similar to Tony’s wife, Carmela (Edie Falco,) from the show. It’s another odd decision, when the better move might have been to make her look more like Lyvia from the show (played by actress Nancy Marchand,) but I suppose the logic here is that Tony ended up marrying a woman who looks like a younger version of his mother.

The movie really isn’t about Tony, though. It’s about Dickie Moltasante. He’s the star of the show here, and the guy who everybody likes, looks up to, and listens to. At one point, Lyvia approaches Dickie and asks him to speak to young Tony (a teenager at the time,) about the trouble the boy is getting into at school. She says that Dickie is the only person who Tony will listen to, and she says this right in from of Uncle Junior, the man who is actually Tony’s blood, and his real Uncle, (Dickie is more like just a family friend.) Then, later on when Tony wants his mother to take some pills that the doctor recommends, and Lyvia refuses, Tony asks Dickie to speak with his mom. Again, we head that Dickie is the only person who Lyvia will listen to.

Now that’a a good amount right there about Dickie and how he has relationships with both Tony and Lyvia. But what about Dickie, himself, and his own story? This movie’s got that one in spades. First, it’s him and his father (played by Ray Liotta,) sitting in a car discussing how badly and abusively the man, (Hollywood Dick Moltasante,) treats his wife. That scene leads to Hollywood Dick’s brutal death. Then there’s also the woman who Hollywood Dick brought over from Italy and treated as his girlfriend, Giuseppina. DIckie starts seeing her as his own girlfriend (despite also being married.) There’s also the relationship Dickie starts up with his Uncle and father’s brother, who is in prison (also played by Ray Liotta.) And then there’s the rivalry and antagonistic relationship Dickie has with a local black gang.

The black gang story takes up a solid portion of this film. The leader, Harold (Leslie Odom Junior, from Hamilton and One Night in Miami,) starts out as friends with Dickie, doing favors for him in exchange for small payouts. But soon things escalate, and Harold wants more than he’s being given. At a certain point, things turn into an all out war between the two families, with guys on both sides getting clipped, other guys being questioned and tortured, and one night time shootout scene. The torture scene involves some pretty bad machinery being applied to a victim’s mouth. It’s reminiscent of the head in a vice scene from Casino. And while the black gang story might be the most exciting part of this film a problem comes when one realizes it has nothing to do with the Sopranos, and has no ties to the show. We’re here for the connections and easter eggs, not for a story that in no way connects to our beloved series.

Regarding the easter eggs, there are certainly a bunch. From Uncle Junior saying, “He doesn’t have the makings of a Varsity Athlete,’ to a handful of appearances by actors playing younger versions of Sylvio, Paulie, and Pussy, this movie gets it done. The guy who playa Sylvio, in particular, is pretty great, really capturing the man’s facial expressions. If only there was a little more of these guys, or more connections to things from the show. We’re here for the story of Tony and learning about how he got “made,” and we really only get a little bit of that in this movie.

Tony’s story is so far removed from the primary plotline here, that we don’t even see a teenage Tony (the definitive version in this movie,) until a solid thirty minutes in. When we do meet the character (played by James Gandolfini’s actual son, in a stroke of genius casting,) his story is mostly about wanting to be a good kid and stay away from crime. When his Uncle Dickie offers him stolen speakers, Tony hesitates at first, until Dickie tells him “you’ll take the speakers, and then you’ll swear never to do it again.”The movie then chronicles the falling out between the two of them, and ends with us seeing how Tony might have been influenced by Dicky to start a war with these guys. It’s one more story for the sequel, if there even is a sequel. But for now, what we have here is pretty goof. There’s a solid amount of references to the show, and having a younger version of Junior and Lyvia, as well as Tony and the rest of his crew, goes a long way.