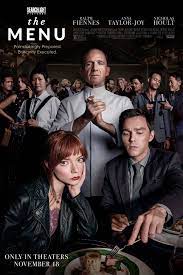 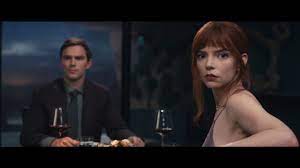 A mysterious and intriguing movie, this one is clever and creative, but it doesn’t quite deliver on the violence or thrills as much as it should have.

The Menu is a cool movie. It’s something different. This one is satire and black comedy disguised as a thriller. The satire works. The thrills, not quite as much. The setup is definitely there, with this mysterious island and group of guests who have come to an exclusive restaurant for an unforgettable (and very expensive,) experience. The way this movie takes its time to unfold and reveal things is also great. What doesn’t work quite as much is the execution and delivery. Basically this movie leaves you craving a little more, feeling like it didn’t quite satisfy all that was promised.

The Menu is a very strange movie. It is satire and black comedy (very black,) and it is wrapped in this story that has elements of horror. Characters are trapped in an exclusive restaurant, where the goal of the chef and staff is to kill everyone there. Sounds pretty interesting right? It is. But it s we Leo would have been better if the deaths were a bigger part of the story. This movie chooses humor over violence, which is a fine choice, but also not one that viewers come in expecting, from the trailer.

We’ll get back to the misleading trailer later. For now, let’s start at the beginning. Two young, good-looking characters get ready to board a shop together. These would be Tyler (Nicholas Hoult,) and Margot (Anya Taylor-Joy.) They talk about the experience they are about to have, and about the other guests getting on the ship.
It is clear that Tyler is very excited about this experience, and Margot couldn’t care less. And that contradiction between them is played for comedy right off the bat.

Next, we get on the ship and travel with them to their destination, a secluded island.This opening is very much like the beginning of Shutter Island…taking the shop out to the location right at the start of the film. It has that element of not wasting any time. Not meeting the characters in their regular daily lives before the big event happens, but instead throwing us  in there to get right to that main event.

Both Shutter Island, the Menu, and also the Agatha Christie classic story turned film, And There There Were None, begun this way, with the characters boarding or already on the ship. In all three movies, the characters are going to an island, which represents being trapped or cut off from the rest of the world. And in all three movies, there is a very good reason for starting the story this way… not revealing to lo much about the characters early on. Because they are hiding something. There are secrets here, as to the very nature of who these characters are, and what their relationships are with each other, and all of that will be revealed when the movie is good and ready.

First, though, we take a walk along the beach of the island, as part of a tour. And even before that, when the characters get off the ship, the staff members of the island ask for their names, and a couple of interesting things happen with the Tyler-Margot couple. Tyler doesn’t know Margot’s last name. Which clues us into the fact that he doesn’t really know her so well. This will be important later. But we also notice some looks between the staff members, in learning that Margot is not the person who Tyler said he would be bringing. Somehow, this has caused a wrinkle in the plans of the staff, who gave calculated everything about every one of their guests, and are now being thrown a curve hall at the last moment. It’s creepy in the way that they are not telling us anything, but we notice the looks, and can only speculate on whet they mean.

And now comes the tour. Our guests are led through the island and the beach, into different areas where food is prepared. But the most interesting part comes when they are taken into the staff chambers. We see that the staff that works in the kitchen and the restaurant live in beds that are side by side lining a single room, like a cabin. They have no space or lives of their own. Now, this is a very in usual place for a tour to go visit. It’s one thing to show you how the product is made, but another one to give you a glimpse at the lives of those who make it. Especially when those lives are so depressing. But this will all make sense later, when the reasons for the big event that will be  happening tonight are revealed.

And then we get to the restaurant. We meet the chef, played by Ralph Fiennes. He’s eccentric to say the least. The meal begins with a breadless bread plate, which is a funny idea, but certainly doesn’t make the customers too amused. They are starving, and the chef teases them with the condiments that you would put on bread, without the actual bread itself. Pretty soon, we are onto the tortilla pancakes, with secrets on them, letting us know that there’s something interesting about each guest at the restaurant tonight.

From there we get our brushes with death. Theres the su chef who takes some very dramatic action. Then there’s the old man who tries to leave and has a finger cut off. Finally, we get an “Angel,” investor who is drowned (although what he is hanging from is never revealed and feels like kind of a cheat – it has to be a helicopter, but then wouldn’t the customers hear the sound of it?) All of this is entertaining, and would be perfect if the stakes continued to go up. Only they don’t. And that’s the problem. This section of the movie which pretty much ends the first half is pretty good. But the second half doesn’t follow through on really raising the stakes.

The problem is that these characters don’t really try to escape. Or fight. There’s a great moment where an actor, played by John Leguizamo, pulls a chair up to a table of Wall Street bros (an Asian guy, a black guy, and a hire guy,) and says,”hey guys, we gotta do something here.” Only nobody ever does. Not together. The old man tried to walk out, and one of the Wall Street guys tries to throw a chair through the window, only when the glass doesn’t break, he just goes back to his table and sits down again. How about trying to fight these restaurant employees off? How about working together to attack them, and get the door to the restaurant opened?

The movie does solve this problem a little bit by letting the men all leave the restaurant and run off to wherever they’d like on the island. It shows that escape is impossible. But even this chase doesn’t feature enough (or really any,) carnage. The trailer made it seem like this would be a restaurant movie turned into a Most Dangerous Game – like hunt for survival. Something like the movie Ready or Not. Only the “hunt,” part is extremely minimal. It’s more symbolic (notice only the men are allowed to leave,) than anything else. The second half of the movie is where this thing goes in some very unpredictable directions, which is both a good thing and a bad thing here. Good, because it surprises us and suddenly features Margot as the central figure, but bad in the sense that it doesn’t give us all we were hoping for. It’s a very cool movie that just could have gone a little further with the violence and thrills.