The Mitchell’s Vs The Machines *** 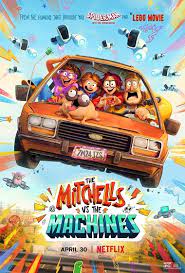 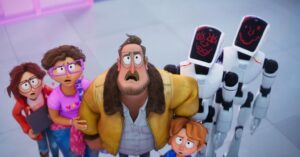 A fun humorous animated movie that is definitely made for the times, despite having a premise that is somewhat familiar.

The Mitchell’s Vs The Machines is a movie that has the perfect level of humor, and some fascinating characters. It’s a movie that works because of its family unit and the way characters interact with each other. And it is a movie pumped with style and execution. The only thing that’s not great, is the overall story about a robot takeover. It’s just too familiar. From IRobot to every other machines will turn on us, apocalyptic scenario, this definitely feels like something we’ve seen before. Only we haven’t seen it like this. We haven’t seen a family of nitwits be the heroes. And that is exactly the appeal.

The movie insists that this is the case, repeatedly throughout its duration. They constantly remind us that this is a family of weirdos and nut jobs. Only, it’s really just the dad and the brother who are strange. The protagonist, Katie, is a character who claims to have never fit in, throughout her life, with her strange art and nerdy mannerisms, only in today’s day and age, all of this is actually considered cool. We are living in nerd culture, and this movie doesn’t try to hide that. Katie makes YouTube videos featuring her dog pretending to be a cop, as a hobby, and the movie tells us that she is instantly recognized by her peers for this. The movie opens on the day before Katie goes away to college, and even though orientation hasn’t even started yet, she’s already got friends at the school whom she can’t wait to meet.

So, despite what the movie tells us about Katie in her life up until this point, it is very clear that Katie is not a loser. And her mom is perfectly normal. It’s just the dad and brother who are the eccentrics. Her dad is Rick Mitchell (voiced by Danny McBride,) and he’s the kind of guy who is comfortable doing things his way no matter how ridiculous they are, or how they look to other people. He’s not afraid to embarrass himself or his family at any given time. And the brother’s big thing is that he is obsessed with dinosaurs to the point where he literally went through the phonebook dialing every number and asking the person who answered the phone, if he or she wants to talk about dinosaurs with him.

The movie begins with a quick flash forward to the family driving through a tunnel, running down a ton of robots, and then driving through an indoor playhouse with a plastic ball pit. It is meant to kickstart the movie with action, freeze frame, voice over, and even a Youtube reference. As Rick is screaming in the driver’s seat, Katie’s voice over tells us that her dad sometimes reminds her of the screaming Gibbon Youtube video. Then we see that video cut with the dad. This establishes the kind of tone that the movie will have. A very young generation, Youtube heavy mindset.

From there, we go back to the start of the story, which is the day before Katie leaves for college. And we get into the relationship between her and her dad. Rick doesn’t get the movies that Katie makes. And he sees that she is going off to college to major in film and pursue this as more than just a hobby. This makes Rick concerned. He tells Katie she needs a backup and that he just doesn’t want to see her fail, and to Katie, this all sounds like he doesn’t believe in her. That he doesn’t think she has any real talent or actually has a chance of making it in the industry. The mom’s reactions to the fight between the two of them are hilarious (at one point she even brings out a timer and turns it until it goes off, pretending her food is ready so she has to leave the table.) But what is definitely establishes early on is that there is a lot of conflict between Katie and her father, so much so that their fight the night before going off to school results in her laptop being thrown against the wall and shattering.

The next morning, Katie wakes up all ready to head off to college only to find that her parents have packed the car for a road trip. They plan to drive her to school themselves, which means a cross country trip. It also means that she’ll be missing orientation, but her father called the school and they said it would be ok. So now the road trip begins, and Katie uses her phone to make videos on the way, which is about the only thing she can do to keep things somewhat fun. At one point, we get a hilarious montage of the crazy things her father does, from having them eat at a terrible restaurant with Yelp reviews that say “don’t eat here, ever,” to showing them all vomiting afterwards, to showing Rick Mitchell drive a car on the shoulder of a road to get around traffic, to showing him try to talk his way out. of a ticket for it, to showing them riding on donkeys through a storm, to showing multiple shots of Katie tricking her dad into getting kissed by the dog. This one minute quick clip segment is probably. the funniest moment in the movie.

During the course of the road trip, the family makes a stop off at a dinosaur museum. This happens to coincide with the exact moment when a tech guru in Silicon Valley is doing a presentation about his newest invention. This is the guy who invented PAL, a personal assistant mobile device. It’s like a cell phone mixed with Alexa, the Amazon TV assistant. And now, he’s up to something new. He has invented full robotic assistants. Life size robots that can do whatever you ask them to. During his presentation, he breaks things on purpose and demonstrates how quickly his robots clean up the mess. And then he starts telling the audience about how the robots have a built in kill code, which means they can never turn on humans. And just as he’s saying this, the robots bypass the kill code and do exactly what he’s telling the crowd is impossible. They turn on the humans.

From there, the robots break out and attack, full scale. Pretty soon these attacks are happening all over the world. And then finally, we see what happens when the attacking robots come for the Mitchells. They are still in the dinosaur museum at the time, and they hide and talk quickly about a plan. Of course as a family they can’t really agree to anything, but somehow they end up in a freezer, which is enough cover for the robots to not be able to find them.

The dinosaur museum is where a lot of this movie gets figured out. It’s basically the halfway point of the film, and it’s where Katie proposes a plan and Rick disagrees with it. This is also the place where the family gets two robots to malfunction and basically start working for them. The robots become like children, calling the mom “mother,” and helping out with telling the Mitchell’s whatever they need to know to rake down the entire robot uprising. As voiced by Saturday Night Lives Beck Benett and Fred Armison, the robots are actually quite funny.

When they finally leave the dinosaur museum, the Mitchell’s employ a pretty cool disguise trick to keep their car hidden from sight. And not long after that, they find themselves at a mall, facing down an army of Ferbies. It’s all pretty creative and fun. And the movie is filled with humor. There are just two problems. The first is the been there before – robot uprising – storyline. It’s not a terrible problem, but it definitely feels familiar. The second problem is the believability factor. There’s just no way the Mitchell’s would get out of all of these attacks so smoothly and perfectly. Now granted it’s an animated movie, which means suspend your belief and just go with it, but one thing Pixar, the high bar setting studio of animation, has been doing lately is upping the believability factor pretty hard. From Onward to Soul to Raya and The Last Dragon (all within a year of each other,) the characters do not get out of their problems easily. With The Mitchell’s vs the Machines, humor is clearly the number one priority, and believability takes a backseat. Now that’s all well and good, and it’s definitely a fun and entertaining movie made for the young YouTube generation (this movie was made by the same team that made Spider-Man: Into the Spiderverse,) but as far as deepened or intelligence, this movie does feel a little lacking. Yes, it hits the Katie Vs her Dad dramatic notes hard, but as far as the robot takeover goes, and how easily the family gets out of it, a little more realism would have gone a long way.