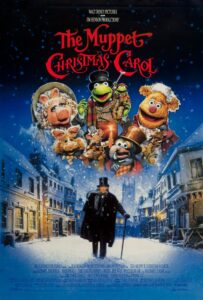 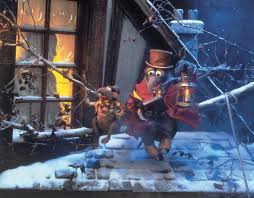 Better than one might expect, this movie tells the classic story and yet finds new ways to present the ideas, mainly by using Gonzo to play Charles Dickens, narrating and appearing in the entire movie.

For the most part, this is a straight-forward retelling of a Christmas Carol, the classic Charles Dickens book. That means there’s nothing too extreme in the ways of variations, like say we got in the Bill Murray movie Scrooged. But what we do get here are the Muppets playing most of the parts, and there’s one in particular who goes a long way. That would be Gonzo, playing Dickens himself, and narrating the movie. He’s a whole lot of fun. So are the Marley Brothers who show up for one great scene and walk away with the best song in the movie. Michael Caine is pretty solid as Ebeneezer Scrooge, but at the same time, there are a number of moments that feel a little slow, including far too many songs, not all of them especially entertaining.

The Muppet Christmas Carol is a surprisingly good take on story made famous by writer Charles Dickens. There have been so many takes on this story, and some have always been far better than others. Scrooged, for example, a very loose adaptation, is a comedy classic. But The Muppet Christmas Carol goes more traditional, meaning it really is about an older man named Ebeneezer Scrooge who owns an old-timey shop where he employs Bob Cratchett and is the meanest, stingiest boss ever. But considering most of the film versions of this story are traditional, to be a good movie, each version needs to offer something a little more. It needs to put its own spin on the classic, and The Muppet version certainly does. One might think this would be a movie just for kids, based on the animal puppet characters, but like The Muppet Movie, about the characters meeting and going to Hollywood to get a movie made, this one has much more going on under the surface than one might expect.

It all starts with an opening that takes us over rooftops and ends in the dirty, grimy streets of old-town London.There we meet Dickens himself, played by Gonzo, the comedic ant-eater Muppet character, who is often used as the sad punchline of jokes. Only Gonzo isn’t playing his traditional role this time. As Dickens, he’s playing the narrator of the movie. And he’s accompanied by a rat sidekick. Gonzo makes it clear, as he begins telling us the story, that he’s going to try to do a faithful job and use the words of the actual book whenever he can. And so he begins with “The Marleys were dead to begin with.” Now, this is pretty close to the actual first words in the Dickens’ book, with one exception. Jacob Marley, the former boss of Scrooge, who is now deceased, has been changed to two men, The Marleys. It’s one of those changes that definitely fits this movie, and that line as well as the Gonzo introduction helps get the story started on the right foot.

From here we see Scrooge appear at the end of an alley and begin walking through the streets. Only we don’t actually see Scrooge’s face. We see his cane and his legs. Occasionally we see glimpses and shadows of his body. And all this while characters in the background sing a song about him and what a terrible, stingy man he is. We eventually see the face of this man, (played by the great Michael Caine,) as he completes his walk through the streets and enters his shop. This is where we meet Cratchett, the quiet, composed, and very forgiving employee. He’s played by Kermit the Frog. That idea of having the most popular character in a series or company play Cratchett is clearly taken from Mickey’s A Christmas Carol, by Disney, where Mickey Mouse played Cratchett. The idea is that you can’t have your lovable, face-of-the-franchise character playing Scrooge, even though he’s the protagonist, so who’s the character with the next most scenes? Considering the three ghosts will each be dividing their time and not appearing in each other’s stories, Cratchett is the obvious answer, and both movies have locked in on this idea.

In Scrooge’s office, we don’t just meet Cratchett and a bunch of rat employees, but also a number of visitors who come by. There’s Scrooge’s nephew who wants his Uncle to celebrate Christmas and not just keep to himself this year, the same way he always does. Then there’s a man who has come to ask for an extension on his mortgage payments. Scrooge throws him right out. Literally. And finally there are Muppets who come to collect for charity, looking to help the less fortunate. Scrooge has no patience for these men either and quickly shows them the door. He treats his employees just as bad. When they ask for more heat and better working conditions, Scrooge laughs in their faces and tells them if they keep complaining, they’ll be out of a job. And yet Cratchett does manage to convince Scrooge to give them all the next day off for Christmas.

When he leaves his shop and goes back into the streets to head for home, we rejoin Gonzo and Rizzo, the rat. These two narrate more to us about Scrooge, and when the man arrives at his home and goes upstairs, Gonzo and Rizzo get into some pretty funny banter with each other. Rizzo wants to know how Gonzo knows what is happening in Scrooge’s house, since they are out here and while he is in there. How is Gonzo able to keep narrating, when he can’t see what is happening inside? It’s a good point, and one that really breaks the fourth wall to talk to the viewers, as well as to get some deep, meta, and realistic about the whole situation. And then we get some physical comedy from these two, including Gonzo’s attempt to be a lamp-lighter which goes horribly wrong when Rizzo’s tail catches fire. He eventually has to jump into a barrel of water just to put it out.

From here we get the introduction to the ghosts by meeting the two Marleys. These are played by Statler and Waldor, the two old man hecklers on the Muppets Show. And they sing “We’re Marley and Marley,” which ends up being the best song in the movie. These two float in the air, are all one color, and are covered in chains. And they deliver with a song that is somewhat creepy, but also pretty exciting and fun. Jacob Marley’s appearance has always been one of the best parts of the novel, “A Christmas Carol,” because it is like a prologue of what is to come. On the one hand, it’s somebody from Scrooge’s past, unlike the ghosts who will be visiting, but on the other, it’s like a bonus. He comes to tell Scrooge that there will be visits from three ghosts this evening. And in the case of this movie, it’s two different guys who play off each other and work well together. The change is definitely for the better, which is not to say that all versions of the story would be improved by two Marleys, but just that for this movie it definitely works. It helps give this movie its own touch.

And then we’re onto the three ghosts. First is the Ghost Of Christmas Past. She comes in the form of a cartoon-like angel girl. It’s an unusual rendering of the ghost, to say the least, but then again so was Carol Kane’s angel ghost of Christmas present in Scrooged, and we didn’t bat an eye at that one. Here, the Ghost of Christmas Past takes Scrooge on a tour of his childhood. That means they start off in a school where Scrooge is staying there on Christmas, continuing to study. When approached by his head master, Scrooge tells the man that Christmas is a just a time where he can get ahead of others with his studies. The head master agrees and encourages Scrooge to keep working. There are no parents or family members in this scene, or really in any childhood Scrooge scenes, and their absense does leave one wondering what Scrooge’s upbrining was like, in terms of Christmas. The school does appear to be a boarding school of sorts, however, and so it can be assumed that Scrooge’s parents might have cold and distant, and not much concerned about whether or not their son stayed at school for the holidays.

Following the headmaster scene at the school, we see Scrooge meet a nice young lady at a party thrown by a man who Scrooge works for, played by Fozzy Bear. Fozzy is all about the festivities as Scrooge tries to get him to concentrate on work, and all that still needs to be done. But it’s at this party that Scrooge meets the woman who will become his love interest, at least temporarily. In the next scene we see him telling her that he can’t marry her, because their financial situation is not right, or enough to live comfortably. And so they break up. From there we move to the Ghost of Christmas Present, who is a giant beast of. man, and truly fantastic looking as a muppet. He takes Scrooge into views of what is happening right now at the homes of Bob Cratchett and also Scrooge’s nephew.

The final ghost is the ghost of Christmas future. This ghost has always been the scariest, with his long cloak and hood that covers his entire face. He looks like a version of Death, complete with everything except for the scythe. And he leads Scrooge to the Cratchett’s house, where Scrooge learns that Tiny Tim, the crippled son of Bob Cratchett, has passed on. This is enough to push Scrooge over the edge and make him realize that he has seen enough and needs to change the errors of his ways. And so with that, he is returned to the present day, where he begins to act like a whole new person.

The story of A Christmas Carol shows character change like no other. The entire story is about a man going on a journey of redemption. Here, when Scrooge arrives at Cratchett’s house, he is approach by Cratchett’s wife, played by Miss Piggy. And this woman does not hesitate to give Scrooge a piece of her mind. That’a one great thing about this movie.. all of the characters we know and love from other Muppets projects stay in character, even when they are playing someone else. So Miss Piggy, the aggressive, no-nonsense type goes at Scrooge head on and begins to tell him off, when Scrooge makes his announcement that he is giving Cratchett a raise. And that brings us to the end, as Scrooge continues to do good around town, such as giving money to those men who were collecting donations for charities. He also helps out a homeless rabbit, who we saw shivering out in the cold in an earlier scene. This is a pretty mature movie, fro a kids version, and it definitely gets the job done. Some of the songs feel a little dull, and there are a few two many of them. They definitely slow down the pace of the movie, which could have been better. But as far as storytelling goes, this one definitely works.