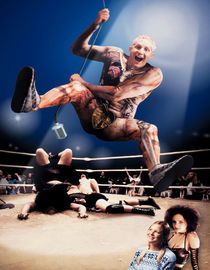 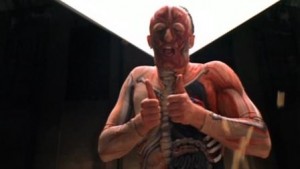 Wants to be campy fun like sam raimi’s evil dead 2 or darkman, but with almost no story, this movie has very little to offer.

Brief review: a pretty lousy movie, that wants to be a revenge movie characterized by black humor, but ends up accomplishing none of it’s goals. the revenge story is thrown to the side for most of the movie and the humor is really not all that funny. there are characters who seem like they could be interesting, like the bad guys, only we are never really given the chance to spend enough time with them. mainly this movie doesn’t know what it wants to be. it wants to be raising arrizona, but doesn’t have any idea to go about it.

The Naked Man is a movie that is more style than substance. it’s a film with a very limited plot that doesn’t mind being similar to tons of other movies because it thinks it can win us over on tone and humor. the problem is it’s not all that funny. the movie wants to be overly campy, like sam raimi’s earlier movies or raising arizona by the coen brothers. it doesn’t pull off what it’s going for.

this film was written by ethan coen of the famous brothers. it might be the only lousy film this master of cinema has ever written. the coen brothers don’t usually write things for other people. that’s because they are visionaries and miracle workers and nobody can interpret their scripts the same way that they can themselves. early on in their career, these guys worked a lot with their friend sam raimi. they even cowrote his movie crimewave together. unfortunately that film turned out to be a low point in all three of their careers. that’s because raimi is good at directing movies that he wrote and the coens are good at movies that they wrote, but directing someone else’s work doesn’t quite work for these guys. interpreting the coen brothers scripts has got to be a nightmare. these guys have a weird sense of humor that only they know how to manage.

this is the challenge that faced the director of The Naked Man, who is in fact the storyboard artist for the coen brothers and their films. it’s one of the oldest lessons in the book. people who are great writers (or in this case great story board artists), are not necessarily great, or even decent directors. just look at charlie kaufman and his directoral debut, synechdote new york. every kaufman movie was terrific until this one. that’s because this was the first time he ever directed his own work instead of handing the script over to a director who could interpret it for a mass audience. the results were pretty awful.

The Naked Man is one of those movies that is just a total mess. it’s hard to conceive of what ethan coen was even thinking, but then again, something tells me if the coen brothers had directed the same script, it would have been a very different film. the movie is about a man named edward bliss jr., who is a chiropractor by day and a wrestler by night. he’s kind of leading two different lives, only unlike the characters in other, better films, with similar problems (like warrior with tom hardy and joel edgerton), bliss doesn’t keep his wrestling job a secret. his wife knows about it, and not surprisingly she wants him to quit.

one day bliss goes to see his estranged parents who turned their backs on him years ago because of their disaproval of his wrestling career. he tells them that he is giving up wrestling and moving into town to try to repair his relationship with them. this was all caused by bliss getting his chiropractor license and deciding that he was ready to open up his own business. his wife gets him to go into the ring and tell his promoter that he’s done wrestling, and suddenly he’s ready to settle down and have a family.

only that first day when he goes to see his parents and tell them that he is moving back to town, something happens. bliss leaves his wife at the pharmacy that his parents own, to stay and talk with them, and then he goes off to take care of something. that’s when some criminals come in and attack the place and kill everyone inside. there are lots of red flags that get raised here and questions that need to be asked. why did bliss leave his wife at the store when she doesn’t even know the parents and just met them for the first time? are we really to believe that the one day he left her there is the time when the place gets attacked?

both the wife and parents are killed. that leaves bliss with nothing. we’ve seen this kind of revenge movie a thousand times before. from death wish to taken to desperado to the crow, to every other denzel washington movie in recent years, it’s been done to death. recently the movie john wick was released with keanu reeves taking a crack at it, coming out of retirement to get vengeance on some mobsters. so what does The Naked Man have to offer the genre. not much. only that the character is a wrestler and chiropractor. other than that simple setup, this is like every other movie.

except it isn’t, because the movie doesn’t concern itself with the vengeance plot until the very end. if done right, i wouldn’t have minded seeing him spend the movie seeking vengeance, no matter how many other movies did that before. after all, i still want to see john wick, and am not just condemning it for having a simple revenge story. sure, it would be cool to see another angle, like having a mystery to follow with the cops, or seeing the bad guys’ perspective on things, but a revenge story would be just fine. only the movie doesn’t go any of these routes. not a revenge story or anything else interesting either. instead, it basically spends the duration of the movie just killing time until the character can finally go after the two bad guys, who killed his wife and parents, at the very end of the movie.

for killing time, the movie does two things. it brings in a pair of cops who are investigating the case and looking for clues, and it shows flashbacks to how bliss got into wrestling. neither one of these things is pushing the storyline forward in any way. the cops story is pointless because we already know who the bad guys are and exactly what happened. we even know the reason why they committed the murders, having watched the scene where they come into the store and try to buy the place from bliss’ parents. you see, a movie where we follow the cops in an investigation only works if there is some element of mystery, where the cops might find answers that we don’t already know.

the flashbacks don’t work any better. that’s because they aren’t really relevant to what is happening in current times with this guy who just lost his wife and parents and is now out for blood. who cares how and why he got into wrestling at this point in the story? maybe earlier on that could have been interesting, but now with his wife and parents murdered, the last thing we care about is why he started wrestling all those years ago. if it was important than they should have showed us this earlier on. only it’s not important. it’s killing time. the movie is a mess. once in a while there is decent humor, but more times than not, it’s just pretty dumb. the two bad guys are played by some great acotrs who have just been given lousy roles. there’s john caroll lynch of fargo and michael jeter of welcome to collinwood. the casting isn’t the problem. the lack of creativity in the script and ideas are the reasons why this movie is lousy.