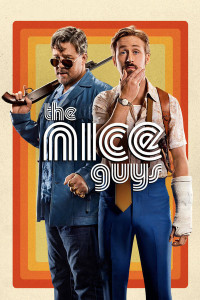 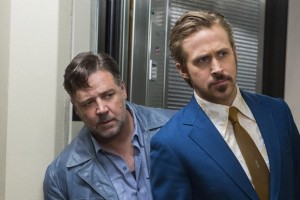 A modern masterpiece, this movie takes small tokens from some of the great mysteries of our time, (Chinatown, L.A. Confidential,) and weaves them together into a story that is entirely its own. The film is placed in the perfect setting and time period, (the seventies, among the underworld culture of the seedy, pornographic industry,) and features some terrific black humor. To call our two leads anti-heroes is an understatement, but they are certainly great characters filled with misery.  And the storyline they get tied up with makes for a  pretty thrilling mystery. The Nice Guys works on all sorts of levels, but most of all it works because it’s smart. Here’s a movie that knows the usual cliches and knows exactly how to avoid them. On top of that, it knows how to poke fun at the cliches by pointing out how dopey they are, and how much smarter this film is.

The Nice Guys is a fantastic movie. It’s a buddy cop kind of film (except that these guys are private detectives, not cops,) set in California in the seventies, around the seedy world of drug and pornography culture. Talk about environment. This is a Shane Black movie, and it’s one of those rare situations where a director is just perfectly suited to a certain type of movie, gets carte blanche to do whatever he wants with it, and the product turns out as good as one might hope for. By carte blanche, in this case it’s Black getting an R rating. This is the guy who started his career as a screenwriter penning the Lethal Weapon series, (perhaps the most well-known buddy cop, R rated franchise.) Black went on to write numerous other films, and then to direct movies like Kiss Kiss Bang Bang and Iron Man 3. All of these are good, if not great movies. And the Nice Guys just might be his best movie yet.

It’s a toss up between this one and Kiss Kiss Bang Bang, and that’s saying a lot. Both films are R rated mysteries about unlikely bumbling detectives. They are black comedies where the heroes would rather drink themselves miserable than put their lives at risk to save anyone. And yet that’s exactly what they do. Robert Downey Jr. got a big break from Kiss Kiss Bang Bang, a movie that came at a time when he was better known for being a drug addict than for making movies. And that movie showed he was actually a pretty talented movie star. The Nice Guys does the same for Russell Crowe, an actor who hasn’t really been relevant in a while.

Crowe plays Jackson Healy, a muscle guy who is payed to intimidate and beat people up. He’s the guy you hire if your daughter is spending too much time with a sleeze-ball drug dealer. That’s what he tells us in voice over, at the start of the film, as we see scare a guy into leaving a girl alone. This isn’t very far off from the character Crowe played in L.A. Confidential, (his breakout role,) where he was also the muscle or enforcer, part of solving crimes, and had a soft heart for helping out women. Here, his character, Healy is partnered with Holland March (Ryan Gosling,) the bumbling, alcoholic detective.

The movie starts off pretty smart, sticking only with Healy as he finished a job and then takes on another one. A girl named Amelia tells him that there are two guys who keep following her, and she can give him the address on one of them. She wants Healy to do something about it. Then we meet March, as he sits in an ice bathtub, fully clothed, and falls out of it to answer the phone. March is a mess, and we learn more and more about why, and all that he has been through, as the movie goes on. Even a message on his hand, that says “you will never be happy,” factors into the film later on, in a poetic sort of way. This is how you develop characters, giving us little pieces to work with and make us curious about, as they slowly get revealed before our eyes.

Before we met Healy, there was a quick scene of a porno actress named Misty Mountains, driving down the side of a cliff and crashing her car through a house and into a pool. We were given a lot of information, all through visuals, here. In just moments we learned who this character was, and that she wasn’t just dead, but that she was murdered. From here we meet Healy,  and then after that, meet March as he takes on the case of whether or not Mountains is still alive. The girl’s grandmother has hired him, claiming that she went by Misty’s apartment, after the paper said she had been killed, and saw her granddaughter through the window, sitting at a desk. March located the girl who this woman thought was her granddaughter, and is ready to close the case. Only the woman writes another check for him, asking him to find out more, and he accepts.

And now we get the connection between Healy and March. Those two guys that Amelia asked Healy to look out for, well, one of them is March. He was following her because she is the girl that the old woman saw in the window. Healy beats March up, and then the other guys who are following Amelia come and find Healy and rough him up. And now the mystery starts. Who are these guys and what do they want with Amelia? Healy goes to find March to get him to help, (two guys who hate each other at the start of the film might be a cliche, but in the hands of Shane Black it feels pretty perfect, and seems to fit in exactly the right way.) March asks Healy why he cares so much and if this is all for Amelia. Healy responds by saying he likes where his office is, and wants to stay there. These two guys showed up at his office and know where it is, so he wants to know about them and what they’re after.

From here, we get a new wrinkle that leads the guys to a hotel by the airport. When they reach the a certain floor and the elevator doors open, it leads to what is perhaps the funniest sequence in the movie. Let’s just say, instead of jumping into an impossible shootout, these guys do the exact opposite. Their reaction is hilarious for multiple reasons, including the statement it makes about all other action movies, and how these guys are in a realistic movie where they actually want to live. Another reason is the expression on March’s face as his body can’t stop nervously shaking in the elevator. And then there’s the guy who gets thrown out the window on the floor above them and comes sailing by their glass elevator window.

The Nice Guys is in many ways like some of the best mystery movies of all time, including L.A. Confidential, (this movie is actually the reunion film for two of that movies stars, Crowe and Kim Basinger.)The Nice Guys has characters follow clues from one place to the next, come across multiple dead bodies of people they are looking for, and it also has a storyline that gets uncovered, where a number of characters (many of which are now dead,) once had a business deal that connected them all, and now has to be pieced together by the detectives. This link, between all different characters whose names we learn, and whose bodies we find, is at the core of the mystery and answer to the questions of who killed them and why. This element really is out of L.A. Confidential, and it is the mark of a good mystery, leading us along a path of connecting clues.

While The Nice Guys is in many ways a near perfect film, including the hilarious tone, terrific environment setting, and great humor, there are also some minor flaws. In fact, really just one. The villain or villains aren’t introduced early on. Now, it’s a mystery, and so we aren’t supposed to know who the villain (s) are for a while, but at the very least, we should have suspects. Only in this movie, we don’t get to meet the suspects until about halfway through. It still works, because keeping with the realism of the situations, these characters probably wouldn’t come across the suspects so quickly,  at the start of the case, however, one has to wonder if the villains might have been built up a little more if they were given more screen time. Other than that, however, this movie is pretty great. It really does just about everything right, including a concern of the city that is constantly being spoken of, (the flies dying because of the air, kind of like the water draught in Chinatown,) and a very cool solution to the mystery of how and why the old woman thinks she saw Misty Mountain through that window.  This is a rare gem of a movie, incredibly smart, funny, and thrilling in pretty much every way.