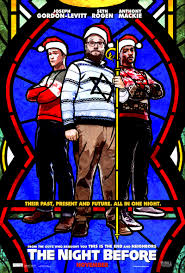 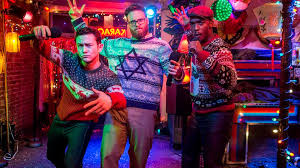 This is one of the weaker Seth Rogen movies, but it’s still not bad, and definitely has its share of laughs and entertaining fun.

Hardly Seth Rogen’s best, this movie is okay, but it is far from great. You would think, a movie about one night in NYC and all the craziness that ensues would be hilarious. Combine that with Christmastime, and it seems like a surefire formula for success. And the movie isn’t bad, but it just doesn’t quite live up to its potential. Maybe that’s because it hits all of the usual cliches, including having the three guys split up and go their separate ways at one point, finding themselves in a sort of fight. That’s the usual romantic comedy cliche, but you would think a film like this, (which is hardly a romance,) would be able to avoid it. Still, there’s a lot to like here, including some of the crazy situations these guys get themselves into, and a wonderful drug dealer character, played by Michael Shannon (the most memorable drug dealer since Timothy Olyphant in Go.) The movie is definitely entertaining, but it is not quite on the same level as some of Rogen’s better films.

The Night Before looks like it should be the perfect Christmas movie. After all, it combines at least three different genres / styles which are all great on their own. These genres or types of movies include Seth Rogen comedies, Christmas movies, and one crazy night going all around the city movies, (think Adventures in Babysitting, Date Night, and After Hours.) If there’s gonna be a city to do a Christmas movie in, it’s gotta by New York. This movie certainly delivers on that, giving us Rockefeller Center and a Nutcracker Ball. There’s a lot to like about the film, but the humor just isn’t as strong as we might have expected.

With Seth Rogen, we come to expect a pretty vulgar and outrageous comedy. Not vulgar in the way of Borat, Howard Stern, or utterly disgusting, but more like a holding nothing back brand of smart humor. This movie has some of that, but not nearly enough. Sometimes the film lets itself go for broke and really go after the laughs, but at other times, it seems like its holding back. These are the moments where it parts a heartfelt, and somewhat corny story ahead of the jokes. That strategy doesn’t quite work. This might be Rogen’s weakest film in a while, (not counting movies like Observe and Report and Take This Waltz, which weren’t really Rogen-penned comedies.) As it happens, Rogen didn’t write The Night Before either, but his writing partner, Evan Goldberg, did. Rogen certainly had plenty of opportunities to throw his brand of jokes into the mix. He gets some of it in, and definitely leaves us wanting more. The movie is more heart then about balls to the wall humor (like This Is The End or Superbad.)

The film starts out with Tracey Morgan’s voice over narration welcoming us to this Christmas tale with some funny rhymes. From there, we learn about the history of our main characters, three guys who have been friends since they were young. We learn about what happened to the parents of Ethan (Joseph Gordon Levitt,) one night, when they were hit by a drunk driver and killed. That means Ethan was going to be all alone for Christmas, only his friends Isaac (Rogen,) and Chris, (Anthony Mackie,) made sure this didn’t happen. They started a tradition, right then and there, of hanging out together every Christmas Eve.

The movie picks up about a decade later, with the guts about to go out and celebrate what is quite possibly their last Christmas Eve together. Isaac (Rogen,) and his wife are on the verge of having a baby. Chris is an NFL player who has just hit it big. He has been drafted, is about to start his season, and has been blowing up on social media. The idea is that Chris will soon be too popular to hang out with them, and Isaac will soon be too busy. So this is it. Both Chris and Isaac feel bad for Ethan who still has nobody, and in a sense is being left exactly where they found him. He has no girlfriend, no family, and these two guys are really his only friends. When we meet Ethan, he is working as an elf at a restaurant, and its not exactly going too well.

Ethan’s elf job is one of those kinds where he’s got an annoying boss who wants to control everything about his employees, down to the looks on their faces. It’s one thing to ask the guy to smile a little more, but this boss makes Ethan give him a very specific elf look, as if he’s thinking about something. And Levitt nails the look perfectly, giving it to us twice, before getting demoted to the coat check room. Once in there, he catches a glimpse of three tickets to the Nutcracker Ball, sticking out of a man’s jacket, and snatched them up. He promptly quits the job, leaves the restaurant, and takes the tickets along with him. This ball is apparently a thing of legend that Ethan and his buddies have heard about for years, and never been able to attend. It is a coveted invite situation, and Ethan now has his golden tickets.

He goes over to Isaac’s house where Isaac is waiting for his friends, killing time with his wife’s family. That includes his wife’s sister and her two daughters. Isaac tells the girls they remind him of the twins in The Shining. This family situation might have been a good opportunity to see the sister in laws husband, as a sad sack who commented to Isaac how jealous he was that Isaac was getting to go out that night with his friends. Something where Isaac could see in this guy what his life was about to become like, now that he was going to be having a kid. Seeing this guy in the house, and then later on in the Church scene where Isaac reunites with the family, would have been great. But that character doesn’t exist. Instead, it’s Isaac and then girls and then him and his wife. She turns out to be pretty cool and actually gives him a box of drugs for him to use tonight. I do like that the wife is not a nagging cliche, but instead is someone who is actually supportive of Isaac going out and having some fun.

The boys head out to party, starting out with their usual traditions of Rockefeller Center, karioke, and Chinese food for dinner. When Chris gets a call from one of the greatest football players in the league (a guy so great, he is nicknamed the Mesiah,) he feels like he is really made it. This guy wants to party with him and wants Chris to score him some weed. Chris looks to Isaac and the box of drugs his wife has given him only to find out that there is exactly one joint in the box. Not quite enough to work for the football player and all of his friends. At that point the boys call up the only dealer they know, a guy who used to deal to them back when they were all in highschool. This is Mr. Green, (played by Michael Shannon,) and he is pretty funny. In fact, he might be the funniest character in the movie, although to be fair, that is in large part due to his very limited screen time. Mr. Green has a few rules, including that he only deals in his car, and that he only meets you in front of a place where he has met you before. For the boys that means only two locations. Either their parents’ houses or the highschool.

Our three characters head to a bar, after meeting up with Mr. Green outside of the school. At this bar, they run into a couple of girls they know. There’s Diana, (Lizzy Caplan,) and her friend, Sarah, (Mindy Kaling.) Diana used to date Ethan, and they broke up because Ethan wasn’t ready to meet her parents. That might seem reasonable considering his own parent situation, but the two of them had been dating for two years at that point, so it was kind of a big deal. Here, at the bar, the guys slowly start to break off from each other. They each find their own mini-story, all while staying at the bar. Ethan ends up talking to Diana, Isaac talks to Sarah, (and they have a funny encounter when blood from his nose gets into her martini,) and Chris goes to the bathroom to have sex with a girl who claims to be his biggest fan. It’s also at this bar that Isaac makes a hilarious video on his phone about him ranting on the subject of having a baby and not being ready for it.

After leaving the bar, Chris finds out that he has been pick-pocketed by the girl he was in the bathroom with. It turns out she wasn’t a fan after all, but simply a thief. This prompts the boys to have to call Mr. Green again, and this time they meet him outside of the house of Chris’ mother. They go in, while waiting for Mr. Green, play some Goldeneye on Nintendo 64 (one of the best games of all time,) and even sit down for a meal with Chris’ mom. From here, they find themselves back on the street, killing time before the Nutcracker ball, and in a limo chasing after the girl who stole their weed. When the limo crashes, they try to hijack a sleigh. That doesn’t work out  too well.

Like the usual formula for romantic comedies, or even comedies about two friends (Ted, Step Brothers, and plenty more,) in the second half, the boys have a sort of falling out and go their separate ways. This is where Isaac winds up at his wife’s Church and Ethan finds himself in a fight with two drunk Santas. It all leads them to meeting up at the Nutcracker Ball for the climax. The ball is a lot of fun and includes some surprise cameos. It also leads to some resolution with Ethan’s romantic storyline. By the very end of the movie, each of the character arcs gets wrapped up a little too neatly, (especially the one involving Chris and steroids,) and this is where the film seems more focused on plot than on humor. At least it only happened at the end. Most of the movie does put the jokes first, but it’s only about half the time that these jokes are actually funny.