The Nightmare Before Christmas *** 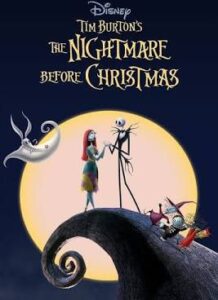 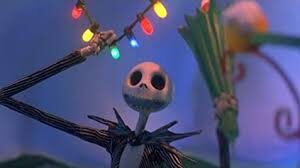 A fantastically atmospheric and magical tale that combines both Christmas and Halloween in some of the strangest of ways.

A movie that deals with a pretty basic concept and takes it to all kinds of creative levels. The concept here is that there are lands which are completely devoted to different Holidays. So there’s Halloweentown and Christmastown. And the movie shows us what happens when the characters from Halloweentown try to take over Christmas. With such bizarre ideas, this one could have easily gone off the rails. If the movie tried to combine the two holidays, for example, it would have been a mess. If it tried to bring the Halloween characters into Christmastown or vice versa, things would have been chaotic. But here, it simply has two characters cross over as Jack Skellington visits Christmastown, gets inspired, has a big idea, and then kidnaps Santa Claus, brining him back to Halloweentown. The movie doesn’t have a great ending, but the terrific songs more and lively musical numbers that run the whole way through, more than make up for it.

Leave it to Tim Burton to come up with this one. Granted he didn’t direct it, or even really write it. The screenplay was an adaptation of an idea of his. The idea was actually a poem, that was so long it pretty much told the whole story of the movie. And Burton combined that with his drawings of characters in this film (he was an animator at Disney when he drew all this,) before handing the ides off to a different screenwriter and director. And yet, Burton gets all the credit and perhaps rightly so. After all, this movie does very much feel like his creation and is perfectly in line with his other works. But it’s still kind of remarkable to think that the movie is called “Tim Burton’s The Nightmare Before Christmas,” when really it is all just based on an idea and some original artwork of his. I guess it’s his name that sells, and in this case, putting his name in the title definitely helped.

The movie is actually a very good and clever little film. It focusses on two major holidays. Halloween and Christmas. Now, if it was simply showing our characters go through those holidays, the way another movie might show characters experience the different times of a year, then it really wouldn’t be anything special. But this movie dwells on the holidays, and pretty much spends it’s entirety in either one of those holidays, or in both at the same time. the story here imagines each holiday as a town devoted entirely to that holiday in every way. So, in Halloweentown, for example, where protagonist Jack Skellington is from, every day of the year is devoted to preparing for next year’s Halloween. So much so that even the day after Halloween, characters are meeting to discuss plans for the holiday when it comes next year.

We begin the movie on the night of Halloween itself, with all of the characters introducing us not only to the holiday, but also to the town. They sing the song “This is Halloween,” written by the great composer Danny Elfman, with each character doing his own spooky thing. It all leads up to the appearance of Jack Skellington. When Skellington arrives on the scene, he is wearing a pumpkin for a head. He does a dive into a basin of water, and when he comes back up to the surface, we see the real Jack, (maybe the name is meant to be similar to Jack O Lantern. After all, he is referred to in this movie as Jack – the pumpkin king.)

Jack Skellington is so skinny he more or less looks like a stick figure. And that’s TIm Burton’s art for you. He doesn’t believe in symmetry or good looking characters. Instead, Burton is all about the awkward and the out-of-place. Jack Skellington has got a giant round head that sits on his ultra-thin body. And his head is almost like a marshmallow, pure white with two eyes and a mouth made of black buttons of coal. If that reminds you of Frosty the Snowman, it’s most likely intentional. At one point, Jack even impersonates a snowman and has an easy time doing it, simply replacing the carrot nose, and jumping into the big round body made of snow. The opening song sets up Halloweentown nicely, but it also leaves us wondering what’s next. What is going to be the story of this strange, fun, and totally atmospheric town?

That’s when Jack leaves the holiday somewhat depressed. Now this is unusual to say the least. After all, he was the star of Halloween. Everything that happened and that every character did culminated with Jack’s climactic appearance and dive. And yet he’s tired of it. He’s tried of doing the same old thing every year. Jack wanders through the graveyard that night singing a song about how he longs for something new and something more. On the one hand, it sounds like he’s just complaining. On the other hand, we get it. A town where every day is devoted to the same old thing does sound kind of boring. And characters who long for change, and to better themselves, seeking to push themselves to the limits, are generally a lot of fun.

So Jack goes wandering around, leaving his town and walking through the woods. He doesn’t know where exactly he’s going, and doesn’t have any plan (kind of reminds us of a “What’s Outside of Pleasantville,” or a Truman Show, with the Truman leaving the set kind of thing,) but he still keeps on walking. And eventually Jack comes to a group of trees, all in a circle, and each one containing an image of a holiday. There’s a Christmas tree image, a heart, an Easter Egg, a four leaf clover, and more. And Jack walks up to the Christmas Tree picture. Suddenly the tree turns into a door and opens up, leading Jack inside the tree. A gust of wind and flurry of snow carry him inside.

And when he wakes up and stops spinning around, Jack is in Christmastown. He now sits atop a snow covered hill and looks down at the colorful town (not unlike the Grinch looking down at the town of Whooville.) Jack begins singing the song, “What’s this? What’s this?” He slides down the hill and into the town and continues the song as he goes from place to place making observations about the holiday and comparing it to Halloween. He constantly references how instead of getting one thing, the kids and people here are getting another, very different thing. It’s pretty funny. Especially considering Jack’s surprise with how everything works in this town.

That leads Jack back to Halloweentown, super excited to tell everyone there about Christmas. He calls a town hall meeting and brings everyone into the Church where he tells them all about this strange and mysterious holiday. Only the characters here don’t seem to get it, and their lack of enthusiasm deflates Jack’s excitement. He now locks himself up in a tower trying to make sense of everything. “What does it mean?” He asks as he does experiments on Christmas ornaments and mini-Christmas trees, He knows there’s something he’s supposed to do, only he can’t seem to figure out what. And then it comes to him when he sees a reflection of himself with Santa’s hat on his head. He and his Halloween friends will kidnap Santa, and then they will run Christmas.

Jack sets about giving everyone in the town a role. For the mad scientist who constantly opens his skull to polish his brain, Jack asks him to make flying reindeer (these turn out to be reindeer skeletons, of course.) To the band of zombies that play instruments around town including a guitar with a person living inside of it, Jack asks them to learn the song, “Jingle Bells.” And to the kids of the town, Jack asks them to kidnap Santa Claus. Everyone gets a job and now everyone is excited. Except for poor old Sally, Jack’s love interest in the movie, who fears he is making a terrible mistake. She’s the one who cracks the code on the Christmas tree experiments, and gets the answer to Jack, only she wants no part of his plan to steal the holiday.

If the first half of the movie is about the learning about Halloween and then coming up with a plan, then the second half is about pulling the plan off. Consider it the same formula as that of a heist movie. And for the most part it works. Even when Jack’s plan goes horribly wrong, there’s great humor involved, and the way he solves his problem is also pretty cool. But there are definite issues with the message or lesson here.After all, Jack dreams of something bigger and learns at the end that he should just accept things for the way they are. He learns not to  push himself to do more. Now maybe the lesson is be happy with what you have. And that’s fine if you consider that Jack got greedy with kidnapping Santa. But considering his boredom early on, and his longing for something more, it seems like Jack follows a common Disney trope (think Moana, The Little Mermaid, The Lion King, Aladdin,) only this time the character is punished for not just accepting things. As far as lessons go, this one doesn’t quite work. But the movie overall is still a lot of fun.