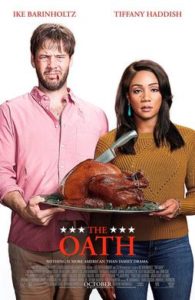 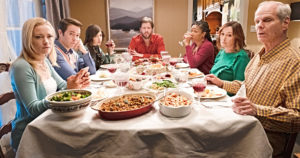 A very interesting and pretty funny movie that just loses some steam in the second half when it gets a little too dark.

This is a pretty cool little movie that takes place almost entirely inside one house. It’s about a strange time in America when the President has asked everyone to sign an oath showing loyalty to him, and most people are going along with it. The protagonist, Chris, seems to be the one guy holding out, standing up for what he believes in. And the movie chronicles the days leading up to, during, and even after the Thanksgiving he has with his family that comes to visit. It is politically charged to say the least. But in the second half, this becomes a very different kind of movie. No longer so much about the politics and suddenly a crime / hostage movie, it doesn’t quite work. Especially not when compared to the far superior first half.

The Oath is a pretty fascinating movie. First, it is incredibly relevant to the time when it was made, and really stands as a compelling representation of the feelings in this country. The time period we are talking about is the Donald Trump presidency. The Oath doesn’t call out Trump by name, (and it isn’t about him, just about a time similar to that,) but it certainly shows the divisiveness, anger, and unrest that takes place among people during this kind of time. These are people who were once civilized and friendly with each other. In the case of this movie, it’s actual family members. And the movie shows what happens when one political party starts taking drastic measures that seem crazy by regular standards, and the people who support that party just go along with it.

The movie centers on a very specific action or event. A declaration that citizens are being asked to sign, known as The Oath. The movie opens by showing us the text of the Oath, and then cutting to a news report that shows people’s reactions to it. The Oath is a document that states that you will be loyal to the president no matter what. We move back from the TV and news report to see Chris (Ike Barinholtz,) and his wife, Kai, (Tiffany Haddish,) watching in horror and disbelief. The report explains that the Oath does not need to be signed now, but that citizens are being given nearly a year to think about it and make their decision. It needs to be signed by Black Friday, the day after Thanksgiving.

What is also being said here is that no harm will come to anyone who does not sign it. It’s not about that, (or so they would have you believe.) Instead, this political party and the people who support it just want a list of who they can count on. They explain it as a sort of white pages for people you can trust if times get tough. But what does that actually mean? That the president can commit crimes and these people will just look the other way? This is where the Trump Presidency gets called to mind. Of course there has never been an Oath or anything like that, but Trump certainly is a President who has committed actions that many feel are immortal or illegal or both. And others who support him often turn their heads and ignore these actions, claiming that they are looking at the bigger picture, and don’t care about what they consider to be minor offenses. And then there are those that support him no matter what he does and defend his actions at all times. The movie is about people like that, and other people who oppose them.

After seeing the opening report, we quickly move to nearly one year later and the days leading up to Thanksgiving. Chris and Kai have a nice home in the suburbs with their daughter. This year they will be hosting Thanksgiving for the entire family. That includes Chris’ parents as well as two siblings and their spouses. The parents arrive first. It’s something like two days before Thanksgiving. The Oath doesn’t exactly come up, but the idea of politics does. Apparently the mother sent an email out to all members of the family stating that nobody was to speak of politics or even watch the news during the time that they were together (after all, putting on the News has even become a divisive situation, depending on what station one puts on, since some news stations are clearly biased one way and others the opposite way.)

While the parents are there, and before anyone else arrives, Chris goes with his mom to pick his daughter up from school. And they all get trapped in the car, which is sandwiched between a car in front and a car in behind them, as they are forced to watch an altercation between two other drivers up ahead. One man gets out of his car, armed and dangerous, threatening violence. At one point he even slashes tires. Chris speaks up, rolling down his window and shouting, “that’s enough.” The point of this scene is to show what an angry time we are living in, and how the political situation is making everyone even angrier with each other. Especially with people who are on opposite sides of the political landscape.

And that leads us to the next day. The day before Thanksgiving, when Pat and Abby show up. Pat is Chris’ younger brother. He is a Republican on the side of the president and completely okay with anything and everything that the president does. Chris is the exact opposite. Things are heated between them right from the moment Chris opens the door, when he calls Abby by the wrong name. He accidentally calls her the name of one of Pat’s old girlfriends. Things only get worse from there, including a pretty big argument the family members get into at a restaurant.

The next day is Thanksgiving. The final members of the family arrive. This would be Alice (Carrie Brownstein,) and her husband, Clarke. Alice joins the family for all events and activities (mainly meals and lounging around,) while her husband has a terrible stomach ache and is forced to remain in bed. This lasts for the entire movie, and is an ongoing joke. Alice is on the same side of politics as Chris and believes that anyone who opposes them is clearly wrong. And yet she has signed the oath. As the movie goes on, we learn that she is not the only one in the family who Chris thought better of, but who actually has signed it as well. There are a few surprises with that, and more yelling matches around the Thanksgiving table. In fact, the meal ends with Chris going to his car and spending the night there, choosing to leave his own house.

But this is only the halfway point of the movie. The second half takes place the day after Thanksgiving, when two government agents show up. There is a fictional government agency created by this movie that looks out for the security of the Republican Party, and the two agents that arrive at the house work for this organization. They are law enforcement of sorts, and carry guns, tasers, and hand cuffs. These men are Peter (John Cho,) and Mason. Peter is the rational one and Mason is the loose handle. And yet both of them end up causing a stir with the family to the point where Peter gets knocked out and Mason spends pretty much the rest of the movie tied up making threats.

The second half of the movie is about this one night, in a couple of rooms of the house, with the family holding these guys prisoner. Things gets beyond out of hand to the point where the family members feel like they cannot just let these guys go. But at the same time, they don’t feel good about keeping them either, and know that it’s kidnapping. They try to negotiate with Peter, (when he is conscious,) but ever time they get close to making progress, Mason chimes in and reverses all they have accomplished with his angry threats.

The second half of this movie is definitely not as strong as the first. While it’s a fine kidnapping / hostage movie in that half, kind of the like the Denis Leary Christmas movie The Ref, it is not nearly as funny as the political black comedy of the first half. Let’s put it this way… in the second half all of the family members are on the same side. So all of the political arguments and debates and even fights they have been involved in so far no longer matter. They are no longer relevant. That’s disappointing considering how much fun the first half was. But understandably a movie does need to build in momentum and move on to bigger stakes. The second half might not be as funny, but it definitely does that. It’s just a little too dark and extreme. This is a good movie, but the first half is far superior to the second and in many ways each half feels like its own little movie.