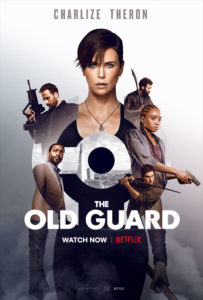 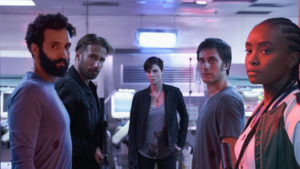 Pretty creative ideas and lots of interesting twists, but could have done a better job with the action scenes.

The Old Guard is a wholly original movie with a fascinating concept about a team of mercenaries who can’t be killed. They have lived for centuries, and now are being targeted by a team of scientists who want to study them and hope to use what they find to cure disease. Only by studying, they really mean kidnapping and running tests on them. So the team has to contend with that threat, but they also have to take in and train a new recruit who has just awoken to her immortality. The movie handles the two different storylines nicely, giving us the fish out of water point of view of the new immortal character, a girl named Nile, while also giving us the story of this team being hunted. And it bridges the stories together seamlessly. What doesn’t work quite as well is the action, which feels pretty generic. The creative ideas are enough, however, to make it a pretty entertaining film.

Here’s a new, big-budget action movie with an original premise. You don’t see those very often. The studios generally shell out the big bucks for action only when it’s either a sequel or bases on some kind of pre-existing content, which means it potentially has a built in audience. But this ins’t a studio movie. It’s a Netflix movie. And they are on quite a roll lately, from Dolemite is My Name to Marriage Story to Extraction to this. It’s one creative and interesting concept movie after another. With this film, it’s about characters who certainly have super powers, but they’re not exactly super heroes. They’re mercenaries. And their powers are all the same… they are immortal.

There is a team of these immortal beings, led by Andy, (Charlize Theron.) Each of them has been alive for hundreds of years. Some even thousands. They have lived through things like the Crusades. And now, they work together to do jobs for hire that involve going in to places where most people who might accept the job wouldn’t walk out. When we meet Andy for the first time, she’s lying on the floor, dead, covered in bullet holes and blood. It’s a hell of a way to meet a character. Normally if a movie opened with something like this, we’d think it was a flash-forward to the ending. Between Carlito’s Way, A Perfect World, and Extraction, as well as others, the list of examples goes on and on. But here, it’s not the ending at all.

We now see Andy and her team, in perfect health, discussing jobs to accept. There is a man named Copley (Chiwetel Ejiofor,) who wants to talk to them and offer them a job. The problem is that they have worked for him before and have a rule, no repeats. Still, they decide to go and hear him out. Copley’s job involves a bunch of children who have been kidnapped and are being held in some pretty horrid conditions. The team of immortals decides to go in and rescue the kids. Turns out it’s a trap and they are all gunned down. Except, it doesn’t work, of course, since our heroes can just rise up again and that’s exactly what they do, this time killing all of the enemies in the room.

The job offered by Copley was a trap. He double crossed them. And it happens early enough in the movie to not be considered a spoiler. Which is a very nice touch. His being “bad,” is one of those predictable twists that you can kind of see coming. The problem is that most movie wait until either the half way point or the end to bring something like that out. This movie gets it out there, in the open, right away, and is all the better because of it. They were double crossed. Do they need to know why? No. It’s not their priority. That’s another nice difference between this and the usual movie of a team getting double crossed, (like The Losers or a number of the Mission Impossible movies.) These guys have another mission they are interested in.

A new immortal has just come into her own. This is Nile, an army officer who as out on a tour when a terrorist who she is trying to help grabs a knife and slits her throat. She dies right then and there. Only she wakes up the next day in a hospital bed and seems totally fine. She has a bandage over where the knife got her, but when she removes the bandage, there is not even a scratch. Her friends from the unit come to visit her, but they are shocked and frightened by what they see. The fact that they saw her die, and yet now Nile is perfectly fine, really freaks them out. It also freaks out lots of other people in the army, and they want to send Nile off for testing. Only Andy gets to her first.

The way this whole immortal thing works is that the group of immortals all dream about each other when they are apart. So each of them sees a little part of the situation with Nile in their dream, and when they wake up, they all discuss what they saw and put the pieces of the puzzle together. This is one of the main reasons why the team members came together and stay together… so they stop dreaming about each other. The other reason is for companionship. To have someone who can go through the same things that you are going through, and live as long as you. Although the immortal thing isn’t full proof. Eventually the no-dying thing stops working and one time you die it’s actually the last time you die. This happened to one member of their crew who we hear about. We also hear a pretty horrific story about another member who was chained up and dropped into the middle of the ocean and has lived the last five hundred years somewhere out on the ocean floor.

The team goes to find Nile, but we don’t just see the situation from the team member’s point of view. We also see Nile’s and follow her story. So the movie gives us both a story about protagonists who have been doing this for centuries and also a fish out of water story about a new recruit. With most movies, it’s one or the other. If it’s a fish out of water story, than the character entering into this new world is the protagonist. But this movie wants to show us every angle, and so we don’t even meet Nile and start learning her story until a solid ways in the film. It’s a smart approach.

Another smart approach is what this movie does with its villain. It is not, actually Copley, but instead the man who Copley works for, named Merrick. Now, the reason why we suspect Copley of perhaps being a villain from very early on, is because Ejiofor is a big name star. It’s a rule of thumb that when you get a star in a movie and he / she is not playing one of the main roles, advertised on the posters and all that, there’s a good chance that this actor will be playing a surprise villain. But this movie has a much bigger agenda than that. Copley works for a man who is trying to cure disease, and maybe even death. The man has hired top scientists to study and do experiments on the immortals. The only catch is that they need to capture the immortals first.

And so the movie is one part the team trying to bring in this new recruit, Niles, and show her the ropes, and another part this villain and is team of mercenaries trying to kidnap the immortals. The formula works. It leads to lots of action scenes and some entertaining twists. The action involves lots of fist fights, but it still could have been a whole lot better. This is where you want to bring in action director. Like the John Wick boys (Chad Stayelski and David Leitch,) or the director of Extraction. Instead, for this movie they got a director whose biggest credit was the romantic drama Love and Basketball from twenty years ago. Considering that misstep, this movie turned out pretty good. But the action definitely could have been better.

Still, it’s a pretty solid, entertaining movie. The stories these characters have, about what they have lived through over the centuries, give it a nice new angle that we haven’t seen in many movies before. Even with Wolverine, another character who never dies (until his powers wear off,) we never really hear about what he has been through over the centuries. The most we get is an opening montage of him fighting in wars. This movie does better. The story of the woman getting thrown to the bottom of the ocean is horrifying. The story of how two of the immortals met, while fighting against each other in a war is pretty cool. And watching Andy survive things like the Salem Witch Trials is pretty neat. But mostly this is an action movie with an interesting plot and some cool twists. If only the action were a little better, this movie could have actually been great.