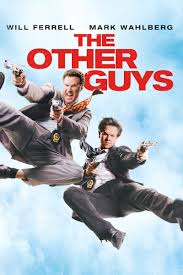 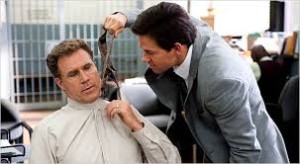 Slightly better than the average will ferrell movie, this one repeats a lot of jokes over and over again, but at least they’re funny the first time.

The Other Guys was an okay movie. It had a very simple premise, which is really the premise of all cop movie comedies. two cops are partners and one is a clown while the other is a hard-ass. the cop who is the hard-ass is always getting pissed at the clown. whether it’s 48 hours and eddie murphy and nick nolte, or lethal weapon with mel gibson and danny glover, or even the recent lousy movie cop out with tracey morgan and bruce willis, this is the formula all cop movie comedies seem to resort to. that’s because most of the time it works. it’s fun to watch one guy acting like a lunatic and the other guy getting all riled up. nobody wants to see a comedy about two guys just riding around in their squad car getting along.

so the other guys uses this formula, and it seems like it is meant to be a spoof on the buddy cop movies of the past, but really it just ends up becoming one of them. to be a spoof, a movie has to acknowledge the ridiculous cliches and then to make fun of them, showing why they are so ridiculous. hot fuzz was a perfect spoof on the buddy cop movie genre. the other guys is not. it might be more in the direction of comedy than the average cop movie with comedic parts, but it is certainly not a spoof.

instead, it’s a moderately funny movie. at least at times. from the very beginning of the film, will ferrell’s character allen gamble is a desk cop who sits around in the office all day on his computer, trying to crack financial scams. he’s an accountant for the police, and his partner, terry hoitZ (mark wahlberg) doesn’t consider him a real cop. there are some funny moments early on where terry throws coffee on ferrel’s shirt, throws him up against things, or even drags him into a squad car at gun point.

Now there are two other detectives who are the cool guys on the force that catch the criminals, and get the babes. These guys are played by samuel l. jackson and the rock, and not very long into the movie, something very strange happens to them. it is totally ridiculous, but in a good way, meaning that it’s pretty funny just how ridiculous it is, and that these two guys actually think that they’re plan can work. but after their stunt, the two of them end up leaving an opening on the force for some fresh blood.

now allen and terry are the new team to beat. or at least they want to be. they have competition from rob riggle and his partner damon wayans jr., and aside from that, they have a captain who is constantly on their case. the captan is played by michael keaton, and he’s not the cliched captain who is always screaming, but more of a nice, rational guy who can’t believe how much these two keep screwing up. one very funny part of this movie is when he takes allen’s gun away (following a desk pop, where allen fires into the ceiling from his desk), and replaces it with a wooden gun. allen keeps losing the wooden gun and having it returned to him and finally keaton decides not to even give him back the wooden gun anymore. instead he gives him a whistle and tells allen that if he blows it, help will come.

the premise of these two guys hating each other and also screwing up over and over again is funny. it could have even been carried out a little further with them having some serious screw ups, either involving celebrities or major destruction to city property. remember leslie nielson tackling and then sliding on the queen of england in the original naked gun movie? that sort of thing. but instead, it tries for a wall street financial plot, and actually makes it somewhat elaborate, and that’s where the movie meets it’s downfall.

Nobody goes to see a will ferrell movie to get lost in a tricky plot. i suppose the joke is supposed to be that these bad guys are not killers, but financial scammers. and so it’s supposed to be very relevant to our time, with bernie madoff’s pyramid scheme and all. but that stuff isn’t as interesting as maybe it sounds. hearing about wall street financial deals and pensions certainly isn’t edge of your seat type stuff.

Aside from that, the movie has a pg-13 rating, and so in today’s day and age of judd apatow comedies, it can’t really compete. the apatow produced movies and now the todd phillips’ stuff (since the hangover made him a household name), are movies that take pride in having a hard r rating and don’t waste it. I just saw get him to the greek again, for example, and these movies have fun with being dirty and sexual with their dialogue and the images that they present. the other guys just can’t compete with that.

it certainly tries to though. terry constantly insults allen by telling him his pee sounds feminine when it hits the urinal and his farts sound feminine. this stuff is somewhat funny, but it can hardly fit into the same category as jonah hill sticking a bag of drugs up his ass. the other guys even tries to be sexual in a scene where wife eva mendes keeps sending her elderly mother out to talk dirty to allen. this, like many other jokes in the movie, is repeated over and over again until it kind of falls flat. i like that the old woman has a hard time with it and keeps complaining that they’re making her do it, (as opposed to an old woman who doesn’t realize or care that what she is saying is dirty), but the content of what she’s saying is really not all that funny or clever. stuff like “he wants to ride you like a bronco while pulling your hair.” not exactly witty.

to it’s testament, the other guys is one of the better will ferrell movies of recent years. for some reason this guy has a hard time finding comedies that work, and so he seems to resort a lot to movies about playing a professional sport, whether it’s race car driving (taladega nights), ice skating (blades of glory), or basketball (semi-pro). I’m surprised he hasn’t made one about tennis yet. and the thing is, these sports movies are generally not very good. they have a script built completely around a sport instead of around a plot line. It’s not a good way to get started. much funnier are his movies that actually have an original plot, like step brothers. the other guys is a little closer to that. it repeats jokes too often (like how allen can get hot women without even trying or how captain michael keaton keeps slipping lyrics from old tlc songs into his conversations). all of these things are funny once or twice, but not four or five times. I wish this movie had been a little more interested in humor and less interested in a tricky plot. especially in it’s second half. there are plenty of things that work, like how the bad guys keep taking allen and terry’s shoes, but the more we learn about the bad guys, the less funny they become. the jokes in the other guys, which started out being the best thing about it, end up falling flat with every additionally time they are repeated. and in the end of the day, there are still some funny ideas, but ultimately there’s just too much of it that doesn’t quite work.