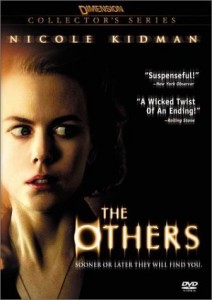 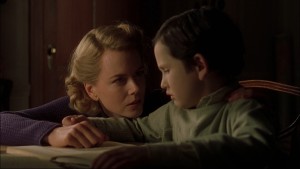 A somewhat cool and creepy movie that moves just a little too slowly at times, and is really all about the ending.

At what point is a movie’s reliance on it’s ending too much? Certainly if the whole movie is lousy up until the ending. no ending could possibly be good enough to single handedly save a lousy movie. but what about movies where the entire film is basically a setup for the ending. that’s the case with the others, a movie that raises mysteries around every corner and only answers them at the end. and i’m okay with a movie like this, so long as the journey to get there is fun. in the others, more often than not, it is.

The movie is about a mother and her two kids who live in a big house away from the rest of the world. the mother, Grace (Nicole Kidman), is very strict and overbearing. her two children, christopher and anne are home schooled and like their mother, have no association with the outside world. grace keeps the curtains on every window shut because her kids are allergic to sunlight. and the house is lit by candles, since this is a period piece and takes place before electricity.

At the start of the film, we get a quick flashback, a la the sixth sense, about the mother shrieking. we don’t know what it was or what it meant, but we join the family years later as the mother is hiring three new workers to tend to the house. one will be a nanny, the other a gardener, and the third is a mute girl who accompanies them. the nanny is the one who spends the most time with the family. her name is mrs. mills, and she seems to know more than she’s letting on about something.

the mysteries start when the little girl, anne, claims to be seeing ghosts in the house. curtains are left open and doors unlocked. that’s another thing about the mother…she locks every single door in the house so that just to get from one room to another you have to unlock about half a dozen doors. anne claims to be talking to a boy ghost who lives in the house with them, but nobody believes her.

there are more and more of these situations where things are uncovered or opened that shouldn’t be. each one is played with high pitched music and quick cutting to make us feel the scares. and the way the house is always kept dark and is lit only by candles also helps keep the suspenseful tone.

there’s a lot of style going on here, and it’s pretty great. the director is alejandro amenabar. he’s a spanish director, and this actually his only american film. he made the original version of vanilla sky, a spanish film titled abre los ojos (open your eyes). that movie starred penelope cruz, who of course went on to be the star of the remake, vanilla sky. and vanilla sky is the movie where penelope and tom met and hit it off and started dating.

now, nicole kidman was married to tom cruise, and once they separated, cruise started dating penelope. director amenabar, meanwhile, was offered the job of directing the american version of his film, vanilla sky. he turned it down, stating that he would feel like he was just repeating himself. and at that point, kidman gave him a chance to direct her in the others.

what does all of this mean? perhaps kidman was bitter about tom and penelope getting together on the remake of amenabar’s film, and hired him out to make her movie. or perhaps she and cruise were still together at the time (both the others and vanilla sky were 2001 releases), and tom pointed kidman in the direction of amenabar, showing her the film abre los ojos, and getting her interested. the reasons why i am so suspicious about all of this are because 1. this is the only american movie that amenabar has ever made, and 2. kidman was really the only star in the movie. there isn’t even a single other recognizable name actor involved here.

either way, the two of them, amenabar and kidman, have made a pretty cool film. it’s not great, because it does start to drag at times. especially in the middle, when grace’s husband comes home for a brief period of the movie. this storyline is pointless and confusing, and i’m still not sure what any of it meant. i think it was put in there just to help fill time, since clearly this movie needed to be longer, and needed more story to keep it going.

but of course the movie is all about the ending. and without revealing it at all, i will only say that it is worth the wait. the ending is handled delicately and with great attention to timing and detail, and it is very cool. the movie itself is good, because it is very stylistic and usually keeps you paying attention. i love the three workers in the house and how creepy they all are. this movie is a combination between a thriller and a mystery and it works on both levels. there are a lot of clever moments here, many of them extra creepy, and they all lead up to one hell of a climax. it’s a good movie, filled with style and surprise.