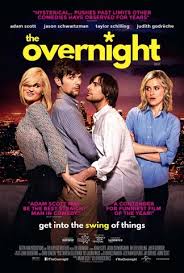 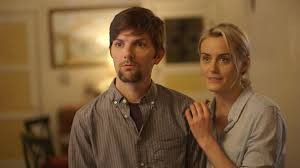 A somewhat interesting and experimental indie film experience when you’re watching it, that doesn’t amount to very much by the films end.

This is an okay movie about a couple that goes over to the house of another couple they meet, and the events that take place during that evening. While one night in one house stories about strangers with surprises tend to be pretty interesting, this one doesn’t have very much of an agenda. There’s a lot of setup here, and the setup and suspense is great, but the payoff that it all leads up to is not. Basically, this couple that has invited them over, is very strange and has unusual sexual ideas. Our protagonists are the straight arrow, rational couple who learn to let loose a little. There’s definitely an indie feel to this one, but in the end, it really doesn’t amount to anything special or new.

The Overnight is a strange movie. It is very low budget and independent to the point where the film is simply about four characters in mostly just one giant house for the entire night. It’s certainly a one night film, but unlike all of those cool, trapped in a house for one night, mystery movies (Clue, The Hateful Eight, And Then There Were None,) this film is very limited on the actual mystery storyline angle. There is no murder or crime or anything to be afraid of. Instead, the only mystery is about what these people who invited  our protagonists over, actually want. Is there a hidden agenda, and if so, what is it? The movie definitely gets weird and intentionally uncomfortable in order to answer those questions.

At the start of the film, we meet our lead couple, Alex and Emily (Adam Scott and Taylor Schilling,) as they are in bed having sex with each other. She keeps instructing him to make circles, and all of this feels like the kind of thing we’ve seen before in other films. Then something interesting happens. The two of them finish doing what they are doing in a most unusual way. Let’s just say, they don’t actually finish with each other, and instead, both take care of themselves. Very strange. It definitely gets our attention.

From there, the characters go to a park for a birthday party. Alex is the stay at home father and he takes his son to the party while Emily goes in to work. Only she ends up showing up to the park a little bit later, and that’s when the two of them meet Kurt. At first they wonder about who this man is, that is approaching their son in the middle of a playground, dressed a little bit strangely with a huge hat. They quickly find out that Kurt is the parent of another boy in the park, and considering that Alex and Emily just moved to the area and are trying to make friends, they gladly accept Kurt’s offer to come over for dinner that evening.

The expression “be wary of new friends,” definitely applies here. There’s something strange about Kurt, and we can tell that from the very beginning, as he approaches the couple for the first time, by giving them a gummy worm that their son was about to eat. It turns out Emily gave her son the candy, and now this stranger has just taken it out of her son’s hands. Weird first meeting. And yet, the desire for friends in the area is so strong that Alex and Emily do go to Kurt’s house for dinner and when they show up there, they cannot believe how nice and enormous the house actually is. As they walk through the gate and up the gigantic driveway, the two entertain a conversation about the bottle of wine they bought and how ridiculously cheap they are going to look when they present it. Alex even tears off the label and then makes up a story about getting the wine from a friend who makes it himself on a farm. This whole wine situation, and the lack of confidence and made up story that it leads to, is all pretty funny.

The dinner is simple and quick. It is most just the parents and kids hanging out at an outdoor table, discussing the neighborhood and themselves. The movie knows that this is not the exciting part, and so it doesn’t spend a whole lot of time on this scene. Good move. Instead, the more interesting moment comes when Kurt offers to put the kids to bed so that the adults can stay up and hang out some more. Alex and Emily agree, and Kurt goes off to bring the two boys upstairs. I’m not really sure why neither of the other parents goes with him, (would you really trust this stranger around your child in a bedroom at night?) It’s also a little confusing who the light show and keyboard playing that Kurt puts on, is actually for. It seems like it’s for the adults, who sit on the floor staring up at the ceiling watching, but then at one point we also see the two boys in their beds, watching the show as well.

At this point, the four of them split up, with the two guys going off for a tour of the premises while the women go off to Charlotte’s bedroom. With Alex and Kurt, they walk by the pool and end up in Kurt’s art studio. Emily and Charlotte find themselves on Charlotte’s bed, where she reveals that she and Kurt don’t sleep in the same room and that everything in this room is hers, including the stories of what goes on in there. It all sounds more mysterious than it actually is. Back in the studio, meanwhile, Alex discovers that the paintings are all of something very strange, and instead of getting weirded out by any of it, he begins to start posing for Kurt.

The two of them are interrupted by the girls showing up, and this is when the idea of skinny dipping is proposed. It seems like a decent idea until Kurt actually strips down to reveal how large he actually is. This would not be such a big deal, except that the movie makes a big thing about it. In fact it actually becomes a plot point that sheds some light on the opening sex scene and what the circles were all about. It also helps us understand why the couple ended their activity in that strange way at the start of the film. Alex has body issues, and he explains them pretty well in a hot tub scene where Kurt calls him out on it, and wants to know exactly what the problem is.

From here, Kurt actually convinces Alex to strip down himself, and we get way too much male nudity. The movie seems to be all about the male connection and very little about the female connection. Considering that it does devote time to the female interactions with each other, it’s a real shame that very little actually happens. When the two women were on the bed together, in Charlotte’s room, for example, nothing happened. When they take a trip together later on, going on a liquor run, the result is pretty strange, but the buildup of that scene definitely exceeded the payoff. When Emily finds herself locked in a strange colored room, told to look through a peep hole, what we imagine she will see ends up being a lot worse than what she actually sees.

The movie is definitely bizarre and sexual in all the ways that it promises, but it still feels kind of anti-climactic. The build up is certainly there, but even with a forced climax, that is thrown in at the eleventh hour, something feels missing. At the end of the day, we realize that not a whole lot actually happened. The mystery and wondering of where this was going were all great, but the answers and resolution were not. Still, considering that most of the movie is the setup and most of that works pretty nicely, the movie is definitely entertaining. By the time we realize that the movie doesn’t have a whole lot behind its buildup and promises, the film is already just about over. In other words, this movie was definitely about the ride and the journey to get to the end, more than it was about the actual end and point that we were trying to arrive at. It’s an interesting movie that just felt a little bit lacking towards the end.