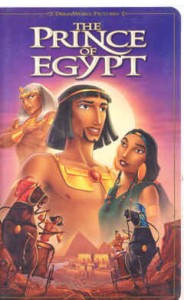 There aren’t too many great scenes, but the overall movie is entertaining and interesting, especially since each of the events is such a familiar part of religious history.

This is a pretty cool movie about the events of the exodus, with the jews being slaves of the pharoah and moses leading them out of Egypt. it starts with baby moses being sent off in a basket, and right away you can tell that this is going to be more exciting than any version we’ve seen before, as sharks, crocodiles, and fish oars threaten to smash the basket apart. the rest of the movie follows the same pattern, giving us a good amount of action while telling the familiar story. the movie is a little slow in it’s first half, where moses doesn’t know who he really is, and needs to take time to learn and realize what he needs to do. once the second half starts up, however, the movie really improves. moses as a leader of his people is very different from the passive trouble maker kid from the start of the film. he challenges ramese, the new pharoah, and finds a way to get his people to freedom. the movie has fun with the graphics and tries to make these biblical events as exciting as possible. the parting of the red sea is the climax and it’s pretty incredible to watch those waves fire up into the air as if rocket ships. the prince of egypt does get slow in it’s middle portion, as moses leaves egypt and tries to make sense of things, but it certainly picks up when he returns to take his enemies on.

The Prince of egypt is the big budget, big screen animated adaptation of the passover story. it’s a good movie, but as more time goes by and all animated films end up being computer designed so as to look more like reality, the prince of egypt ends up feeling more and more dated. ten years after the movie was released in theaters, it ends up looking like the kind of film kids are first discovering when their teachers show it to them in hebrew school. maybe that is the future of the film, and one day we will get a cgi version of the passover story, but for now, this is what we have.

as one of the only real passover movies (other than the ten commandments), about the story of moses and the pharoah in egypt, it’s luckily a pretty good film. the premise is of course well known, and nothing new, as the baby is put into a basket by his mother, and sent along on the sea. but the prince of egypt makes it’s events and images more exciting than they might have really been, and so the basket doesn’t just drift along nicely, for example, but ends up being attacked by crocodiles and sharks before it nearly gets crushed by the oars of rowers and sides of giant wooden ships.

this extra action and interpretation goes a long way and certainly makes the movie more fun that it would have been otherwise. when we meet the adult moses for the first time (voice by val kilmer), he is having a chariot race against his brother, rameses, (ralph fiennes), through the egyptian kingdom of his father. the chase goes on for a little while, and is definitely entertaining, much like the basket traveling through the sea. when it ends, the two boys have accidentally torn down a wall, let a ton of sand escape, and it’s basically a whole big mess. this reminds me of something out of a disney movie, like the little mermaid with ariel causing mischeif and upsetting her father, the king, from the very start of the film.

the prince of egypt wasn’t made by disney, of course. it was made by dreamworks, the studio that was headlined by steven speilberg, a man with a lot of jewish pride. between schindler’s list and now this movie, speilberg likes to make movies about the jewish condition. and both movies happen to be pretty good. here, in the prince of egypt, moses and rameses are raised as brothers, even though moses is not truly a son of the pharoah. he only finds this out when he comes across two jewish slaves (aaron and miriam, voiced by jeff goldblum and sandra bullock), and they tell him the truth about who he is.

moses now goes to see his father, learns the truth, and also learns what his father, the pharoah, has done. early on, when moses was just a baby, the pharoah received a prophecy that a young jewish boy would grow up and overpower him. this jewish man would set the slaves free. the pharoah decided after recieving the prophecy, to have all jewish babies killed. he had them thrown into the sea and drowned. all of that i understand. what i don’t understand is why the pharoah would have pictures of this event all around his kingdom, as if it was something to be proud of. he has images of him pointing and of his guard hauling babies into the water. this is the kind of secret that one should be ashamed of, or at least not want other to know. and yet pharoah has wall paintings devoted to it.

when moses finds out about all this, and learns who he really is, he leaves the kingdom. he now goes to find the jewish people, and meets a large man who is the father to a beautiful jewish woman, who moses had dealings with earlier on. the woman, Tzipphora, (voiced by michelle pfeiffer), was a slave in the kingdom, and moses helped her escape. now he comes to her camp and is taken in by her father.

moses climbs mount sinai, speaks with the burning bush, and returns down the side of the mountain to marry tzipphora. all of this happens at the wrong pace. the mount sinai scenes are over too quickly, with not enough excitement. and the tzipphora scenes go on too long. none of this middle section of the movie, is memorable. these are the parts that slow the movie down and our interest starts to wander a little. we want to see moses and his enemies and here, at the jewish campsite, there is no threat.

luckily, moses does return to egypt for the final two acts. at first, moses is welcomed in by rameses (who is now the pharoah), and treated like a brother. only moses does not want that kind of hopsiptality. what he wants is the jewish people (his people) to be freed. rameses, of course, cannot agree to that. there are number of scenes where moses tries to peacefully explain his side to rameses, and convince this man to do the right thing. my favorite of these scenes involves turning the water red with the power of god, and then watching as rameses’ priests (voiced by steve martin and martin short), use a cheap trick to create the same effect on their water.

when nothing else works, it is time for the ten plagues. these are gone though kind of fast, but the reasons why are understandable. this is meant to be somewhat of a kid’s movie, and many of the plagues are disgusting. to spend time on each one might be cause for a problem. instead, the most time is devoted to the final plague, the slaying of the first born. this is where the angel of death comes into the kingdom and passes over the homes of the jewish people. it’s where the name passover comes from. there’s only one thing that i don’t like about it, and it’s not really a problem with the movie as much as it is a problem with the whole biblical story. at the start of the movie pharoah was killing children and he was seen as completely evil. now, at the end of the movie, god is killing children? this is way too vengeful and it is like an eye for an eye kind of stuff. you would expect the good guys to be better than the bad guys were. especially when the movie made such a big deal about how awful it was what the bad guys did. and now the good guys are doing the exact same thing.

for the most part the movie is pretty good. the climax is the crossing of the red sea with moses using his staff to part the sea and enable the jews to walk across. i really like the effect of seeing the waves shoot up into the air. there’s a lot of story to tell in this film, and i like the additions of action, comedy, and even music. for comedic effect, steve martin and martin short are there, and i only wish they were given a few more scenes. the music is also pretty great, with lots of memorable songs. this is not disney, and these songs won’t live on forever the same way that the songs of the lion king, for example, will, but it is still pretty good.