The Princess and the Frog *** 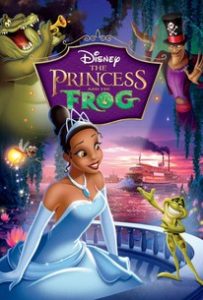 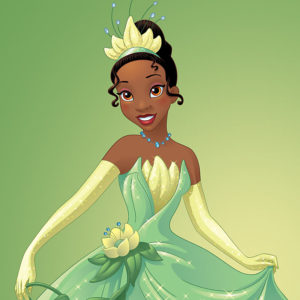 A pretty cool movie that definitely offers us something new and different for the Princess Fairy Tale Disney Collection.

This one is definitely different. Here is a Disney movie that features a black Princess (which by the way – it’s about time,) a New Orleans setting that is oozing with atmosphere, and a story where the protagonist actually turns into a frog and spends about half of the movie that way. She literally becomes an animal and rides out the middle portion of the movie in a swamp, interacting with other talking animals. including an alligator and a firefly. It’s the story of Tiana – the human, however, that is especially fun. All Princesses seem to have their thing, their positive trait that makes them special. With Belle it was intelligence and curiosity, with Mulan and Moana it was bravery. With Tiana here, it is hard work and determination. She was a very specific goal, to earn enough money to open up her own restaurant, and Tiana pursues this goal every step of the way, even when she’s a frog. The story that surrounds her, including a Prince, a voodoo doctor, and a spell is pretty enjoyable. But it’s the character of Tiana and the situations she finds all around her (including all of that lively New Orleans atmosphere,) that make this movie really special.

Boy is the Princess and the Frog different. This is actually the last hand drawn animation film that Disney turned out, and that’s because it didn’t do very well. In fact, Tangled, the Rapunzel film, was supposed to be a hand drawn traditional animation movie until The Princess and the Frog came out and did so poorly that they had to go back to the drawing board with their Rapunzel story and make it a computer generated animation film. But just because the Princess and the Frog didn’t do very well at the box office doesn’t mean anything in terms of how good it is. In fact, this is actually a pretty good movie. And the reasons why it didn’t do so well can most likely be chalked up to how different the movie is from other Disney films that came before it.

Funny that the movie is so different from others, because the trailer keeps trying to point out how similar it is. That trailer starts out with images from Aladdin, Beauty and the Beast, The Little Mermaid, and the Lion King, Disney’s big four of the early nineties (conveniently movies like Pocahontas and Mulan are left out.) Then the trailer goes on to say, “in the tradition of the Disney classics.” But who is this movie kidding? It’s not like those other Disney movies. The only “tradition” that ties these movies together is that they are all hand drawn animation. But that’s it. The Princess and the Frog tries to be it’s own thing all the way, and that happens to be a very good quality in a movie.

So let’s start talking about some of those differences. First up is the obvious, that the heroine is black. Now that should be a huge plus. Minorities have been the subjects of plenty of of other Disney films ranging from Pocahontas all the way to Coco. So it’s about time we get the first black princess, (although she’s not really a princess, which is another cool point abut this story.) Other than featuring the first black protagonist in a Disney animated movie, this film also sets itself in New Orleans, which is one of the most extreme and unique cities in the entire United States. This is a place that is characterized by it’s specialty food (jumbalaya, gumbo, Po Boys,) it’s old time jazz music, and it’s southern charm, accents, and attitude. And the movie captures it all!

The third way that this movie is different is that it makes the protagonist, Tiana, into a frog for nearly half of the film. Now that’s pretty crazy when you think about it. Sure, we have seen movies where the protagonist is an animal, such as Dumbo, Bambi, or the Lion King. But in those movies, the character is an animal for the entire film. So we as an audience get used to that world pretty quickly, and accept it. But here, in the Princess and the Frog, the character is human for half of the movie and a tiny frog for the other half. It’s strange to say the least. In a sense it’s trying to have the best of both worlds, but it does feel a little uncomfortable. Especially from the human point of view, of wanting to watch what happens to this hard-working woman that we have come to like from the start of the film, and now having to watch her as a frog. Something just doesn’t feel right about it. Let’s put it like this… the first black Disney protagonist and what do they do? They turn her into a frog for half of the movie.

Now, that being said, there’s a pretty good reason why they do it. To give us a twist on the traditional story. The traditional story is that a Princess kisses a frog and then the frog instantly becomes a Prince. The end. Not a whole lot to work with there. And the movie opens with Tiana’s mother reading that story to Tiana and her best friend Charlotte La Bouff, (a white, souther belle.) But where do you go from that? It’s either he turns into a Prince, but is really a frog who has now become human and has to learn to be a human, or you put a twist on the entire classic story and DON’T have the frog turn into a Prince. And that’s the one that this movie opts for. It justifies this nicely by claiming the reason why it didn’t work is because Tiana is not a Princess, she just was dressing like one for a costume party. If she had been a real Princess then when she kissed the frog, he would have actually turned into a Prince. But instead, she now becomes a frog as well.

Before we get to all this, we meet Tiana, her mother, Charlotte, and also Charlotte’s father, Big Daddy, a large rambunctious man who is very popular in the town (he gets voted the mayor of Mardi Gras six years in a row,) who is wrapped around the finger of his demanding little daughter. Charlotte is the kind of kid who gets whatever she wants and is certainly spoiled, and yet somehow this movie avoids making her come off as a character we dislike, (like, say the kids in Willy Wonka and the Chocolate Factory.) Maybe that’s because she doesn’t ask for anything that unreasonable, and is more energetic and enthusiastic about things, than the complainer type we might associate with this kind of situation, (where nothing the father gets her is ever good enough.) Also, Charlotte is kind and supportive of her friend, Tiana, every step of the way.

The movie opens with the girls hearing the story and then Big Daddy showing up to get Charlotte. And then Tiana and her mother leave. Now this is a little confusing, because it seemed like the mother was watching both kids and then Big Daddy came to get his daughter. So why are Tiana and the mother the ones leaving. It seems that the answer is that the mother works for Big Daddy, and this is the factory / dress shop where she works, or maybe that it is actually Big Daddy’s home. Either way, we not travel with Tiana and her mother by trolley car, into a much smaller and more run down part of New Orleans. We experience the difference in the sizes of the homes along with Tiana as she watches out the window. When she gets home, Tiana has some fun cooking and taste testing with her father. And then the movie cuts to fourteen years later. Now, Tiana is a waitress, her father has passed on, and she works tirelessly as much as possible to save up money for buying her dream restaurant.

After a conversation between Tiana and the cook, where he tells her she will never get enough money to open up a restaurant, Charlotte and her father pop into the restaurant. And a deal is proposed. A Prince is coming to visit the city for Mardi Gras, and Charlotte wants to throw a big party to impress him. The deal is that she and her father will hire Tiana to make some of her famous food and serve it at the party. They pay Tiana a whole lot of money to do this, which she brings straight to the bankers to try to buy her restaurant. Only that doesn’t go so smoothly. Still, she accepted the job from Charlotte and her father, and now it’s time to go through with it. Prince Naveen has come to town and he makes one big stop before showing up to the party.

That stop is to visit the local voodoo doctor in the town. This is Doctor Facilier, (voiced by the great Keith David,) and he’s got some tricks up his sleeve. With the help of the Prince’s assistant, Lawrence, the two of them trap the Prince’s soul in a vial necklace and turn the Prince into a frog. By wearing the necklace, Lawrence is able to look like the Prince. And that’s who ends up going to the party. Both Lawrence and the frog version of Prince Naveeen. This is where the kiss happens, when Tiana goes to change into a Princess costume. This is where Tiana becomes a frog. And now she and Naveeen head to a swamp, where they meet an alligator, a firefly, and go to see Mama Odie, hoping the old woman can reverse the spell.

The swamp stuff isn’t great. It is lively and filled with music, (the alligator plays the trumpet and has a song, and even Mama Odie has a song,) but even still, in many ways the things that happen in the swamp feel like the movie is just stalling for time before getting back to the main villainous characters, who are back in the city, (Doctor Facilier and Lawrence.) For example, at one point in the swamp, our characters come across a row boat of hillbillies who are out hunting alligators, and we get into a slapstick fight between the three men and the frogs. It’s humorous and entertaining, but not really relevant to the plot and definitely a detour. The swamp mid-section of the movie is fun, but it also definitely feels unnecessary. But then the movie gets back on track for the ending, which involves a Mardi Gras parade and marriage on a float. That’s a pretty good place to set the climax. This movie definitely has a lot going for it. The setting and atmosphere are fantastic. The characters, going all the way from Tiana and Charlotte to Doctor Facilier, are pretty good. Even the story is interesting. There are little hiccups here and there, like it might have been nice to see Prince Naveen with his parents early on, to establish the relationship we keep hearing about, (where his parents have cut him off because he is lazy,) but you can’t have everything. And this movie has a lot. It’s a pretty solid film.