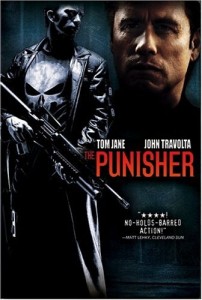 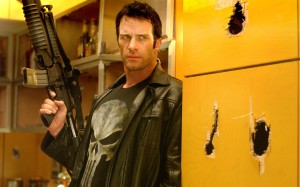 A pretty cool action picture that gets tied up in some uninteresting plot points every now and again, but is otherwise a lot of fun.

The Punisher is a movie that knows exactly what it is and tries to embrace that. it’s basically a big budget combination of the two Punisher movies that came before after it, mixing both of their styles together into one. the first punisher movie, with dolph lundgren was corny and campy and pretty bad. then came this Thomas Jane / John Travolta film. and the third movie, Punisher: War Zone, was ultra-violent, ultra-bloody, and not all that great either.

The Thomas Jane Punisher is definitely the best of the three, and that’s because it does most things right. for one, it is violent and bloody, but not in an over-the-top way like The Punisher: war zone was. Instead, it also embraces a corny and campy storyline, which is where the dolph lundgren version comes in.

there are tons of corny lines and ridiculous action moments, and if you’re looking for plausibility than you’ve got the wrong film. The Punisher is, after all, based on a comic book super hero, and this movie certainly tries to embrace that. at one point, for example, he takes on a giant russian goon in his apartment and the guy looks almost like a cartoon character, striped t-shirt and all. he and The Punisher throw each other through walls and destroy the place in a thousand ways, and it’s a lot of fun, so long as you don’t even attempt to take it seriously.

the story might lead us into good action scenes, which is of key importance to a movie like this, but it also occasionally gets a little slow. even the stand-off that begins the film is a little too fast moving, with lots of names being thrown out and not knowing exactly what’s going on in all of the darkness.

still, we catch on pretty quickly to the idea that a cop has gone undercover as an arms dealer, was involved in the death of a mobster’s son and has now retired and fled the country with his wife and son. that man, frank castle (jane), thinks he is about to start living the good life. boy is he wrong.

the mobster, Howard Saint (travolta), dispatches a number of goons to come after castle and his family. i don’t know why it has to be a giant family reunion with a whole group of relatives getting wiped out, but that’s exactly when the bad guys come. castle fights a couple of them off, but they end up killing his family and thinking that they killed him. there’s always an issue when the bad guys think they killed the hero but really didn’t, no matter what the movie is. if they overdo it, like shoot him in the head, then he’s dead and there’s no coming back. but if they underdo it, like do anything other than shooting him in the head, than when he does survive, people say,”why didn’t they shoot him in the head?” I think this movie handles the situation just fine. he is shot in the leg and the chest and then left for dead on an exploding dock. and the bad guys do stay around to watch the dock explode. they just don’t see castle’s body get blasted out into the water.

castle comes back, of course, and starts enacting vengeance pretty quickly. he says it’s not vengeance, but punishment, only who’s he fooling? if it’s not personal than okay, maybe it’s punishment, but when it’s retaliation for them killing you’re family, there’s only one word for it…revenge. still he comes back and kicks some ass, and it’s a lot of fun watching it all go down.

While the action is pretty cool, the storyline starts to drag as the movie goes on. one problem that causes it is that john travolta’s villain, Howard Saint, is not really presented to us as that bad. yes, he kills a guy early on who was supposed to be watching his son, but other than that he just seems like a decent guy. it isn’t even him, but his wife, who gives the order to have castle’s family killed. travolta has played villains before in movies like broken arrow and face-off, and while those portrayals are kind of silly and over the top, at least he comes off as really bad. we hate him in those movies and we can’t wait to see him meet his end. here, in The Punisher, he just comes off as kind of wimpy.

and while the movie does have fun action scenes, it could have used more of them. we get a plot about the ways that castle is slowly taking saint apart, bit by bit, and many of those ways don’t include much violence at all. instead they include a removable fire hydrant, and a meter maid giving parking tickets, and castle trying to make it look like saint’s number one guy, quentin glass (will patton) is having an affair with his wife. an action scene or two to get rid of the wife and glass would have been better than this. i understand the idea is to make saint kill his own friend and wife, but it isn’t as much fun as some more action would have been.

the movie is good, but far from great. we enjoy the characters and casting and especially in the first half, are completely on board with the things that lead up to the man becoming the legend. thomas jane is the perfect actor to be playing the title role. travolta and patton are good actors to play the villains, even if travolta isn’t as bad as he should have been. and then back where castle lives, there are his friends, ben foster and rebecca romjin. but the main focus of this movie is the action, and while there could have been more, everything the movie does give us is a lot of fun. from the hallways shootout in the lobby of castle’s building, to the johny cash-like guitar assassin, to the russian monster, to the hunting finale, the action is what keeps this movie going.