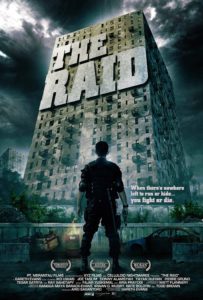 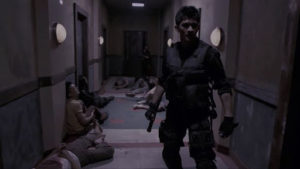 One of the craziest all-out action movies, this one is brutal, horrific, and also some pretty hardcore fun.

Holy hell this is a cool action flick. It’s hardcore R rated action all the way, which means it’s taking action about as far as action can go. This is one of the movies that inspired the John Wick series. Not in terms of plot, but in terms of style, and pushing the limits. The story here is about a bunch of cops who go into a building of criminals to raid it and try to bring down the crime lord who runs the place. If that sounds familiar to you, it’s probably because it’s the exact same storyline as what was used for the Karl Urban film Dredd, released the very same year. Both movies are great. But this one delivers on the action in ways that put it up there on the list of movies that have the largest amount of fight scenes in them. This movie is definitely brutal and not for everyone, but it’s also a lot of fun.

Everybody said The Raid 2 was a crazy, off the chart action movie. It wasn’t. The movie was fine, but it was actually more story driven than action driven, and there wasn’t nearly as much action in it as one might have expected. Now the original Raid movie, well, that’s the movie which is the real crazy off-the-charts action flick. The Raid: Redemption, (the original,) is right up there on the list of movies that have the most action packed into them of all time. This one is almost on the same level as District B13 or the Protector for the most amount of fighting in a single movie. These are the movies that inspired the John Wick films to bring R rated martial arts to the mainstream public, (as witnessed by the stars of the Raid movies appearing in those films, because the minds behind John Wick were such big fans of these movies.)

The Raid Redemption has a very simple and straight forward story. This one is stripped down of all bigger and more complicated parts. It is simply about a team of cops who go into a building that is filled with gangsters and is a sanctuary for criminals, overseen by a big boss murderer. If the plot sounds familiar, that’s because the Karl Urban movie Dredd used the same storyline and came out at the same time as this film. the movies were so neck and neck that there’s no way to tell which one copied the other, or if there really was any copying done at all. Could it have possibly been coincidence? Who knows. The truth is, both movies are pretty great in their own way, (Dredd being a futuristic film, and the Raid being more about martial arts.)

But between the two of them, the Raid is the one that goes all out on action. The stories are similar, but that’s about it. In both movies, the cops end up thinking they have the upper hand, but quickly learn that they have walked into an inescapable situation. It’s the criminals and killers, who are on their home turf, and who truly have the weapons, power, and numbers to take these guys down. It’s a no win situation for the cops, and that’s the way a good movie should be… having us rooting for the underdog. Its also the way a story should go, having either us surprised by the turn of events, or at least the characters getting surprised by them.

In this movie, our protagonist is Rama, a young police officer who we see training in martial arts at the start of the film, before saying goodbye to his pregnant wife. Rama is the good guy. He’s the good son and the young, innocent cop. He’s a cliche of a character, but that’s okay. We’re not in this movie for character. What we are in it for are amazing fight sequences, and this guy is right there with Tony Jaa as one amazing martial artist. Getting back to the character, before leaving on his mission, wee also see Rama’s father tell him to bring someone home.

And then Rama is off, joining up with the police force that plans to go in and raid on the building. They are after one guy in particular, the leader of all the illegal activity that goes on in this area, and the crime lord who runs the building, Tama (not the smartest move to have the names be so similar, but oh well.) The goal of the entire mission is actually to capture Tama and bring him in, or else kill him. There are two guys leading the mission for the police. One of these is the man who knows everything about the villains they are after, Lt. Wahyu. He has short gray hair and looks more European than Asian, making him stand out a little among this cast. He’s the guy who represents the character in every police movie who has been tracking these bad guys for ages and knows everything about them. He’s the guy who has been brought in from outside, and who the other members of the team don’t know very well, or trust.

The other guy is the young but confident officer who is in charge of this unit. He gives them a little pep talk at the start, and tells them that everybody comes home from this alive. Yeah, right. The scene of them loading up inside a police armored van is pretty cool and you can sense the tension these guys are all feeling. They know what they’re about to walk into, and they pretend to be confident even when you can clearly tell that they aren’t. Then they bust out of the vehicle, line up against a wall with their backs pressed against it, looking out at the building. And then they’re off.

The movie takes things in stride, not letting the villains know that our team of heroes is there, right away. As unlikely as that is, (you would think that a building like this would have lookouts,) it works for this story. The police get in on the first floor and start picking off guards, one at a time. They even come across an innocent man who lives there and is bringing medicine to his sick wife. Now, this part doesn’t make a whole lot of sense. Why would an innocent man be living in the building with his wife. This is a building for criminals and killers. This isn’t like Judgement Night where two women take the guys in to help them out, because they are good people who just happen to be living in a bad neighborhood. This is a building that is specifically designed to give sanctuary to criminals. Why anyone would live there, who has nothing to do with illegal activity, is beyond me. But of course, this character is going to come up again later. The cops are going to need his help at some point. And that’s the real reason why the character is in the movie, despite his being there defying reality.

The guys make it up a certain number of floors and they do come across enemies every now again. But they pick them off quickly and with little consequence. That is, until they find two guys together, and only get one of them. The other guy escapes their shots and runs right to an alarm system where he is able to set off an alarm throughout the building, letting everyone know that the cops are there. And that’s when we get the inevitable announcement over a PA system by Tama, telling everyone in the building to go after these cops. Anyone who kills one of the cops gets their rent free from now on. “And remember,” he tells them, “have fun.” And that’s where the action really begins.

What follows is a ton of hand to hand combat scenes. At once point the guys are holed up in a room and grab an axe to chop through the floor in order to get to the room below them. At another, they hide in the walls, like something out of The People Under The Stairs. And all of this is mixed in with lots and lots of fighting scenes. Rama takes down one bad guy after another, and that includes a whole gang of machete wielding psychopaths, in the hallway. There’s also a long fight scene at the end, with him and a friend fighting against Tama’s right hand man in one single room where the bad guy was torturing someone.

There are some surprises and twists at the end, but this movie isn’t about that kind of thing. It’s not about plot. And therefore, nothing related to plot lands especially well. What this movie is about is the action, and in that regard, the movie is off the charts. This is right up there with the best of Jet Li and the beast of Tony Jaa and the best of Jackie Chan (although his material is never really R rated.) Now, with the hard R that this movie gets and deserves, one thing that comes with it is lots of gruesome bone breaking and human body destruction. It’t not pretty. This is not John Woo grace and dance-like choreography. Instead, it’s brutal and gritty, and basically the foreign version of a John Wick film. And it definitely accomplishes its goal.