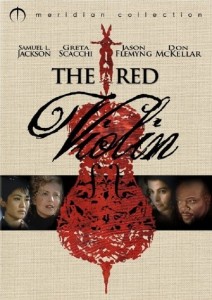 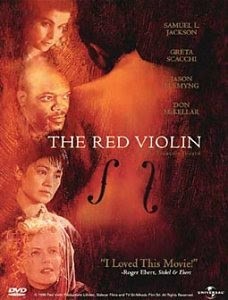 One Liner Review: definitely a different kind of movie, this one tells lots of short stories and most are interesting, but it does get tiresome after a while.

This movie has a cool structure to it, showing us one story after another in which a violin has traveled through time and found its way into a new characters hands with each story change. the only problem is, we never get to see how the violin moves from one story to the next. there are no connections here, and you definitely feel like something is missing. on top of that, the first two stories are good, but the next two drag on. luckily the movie saves the best one for last, with samuel l. jackson showing up to bring in the last story and nearly save the day.

The Red violin is a movie composed of a series of short stories, all involving the same violin. we basically follow this violin through time, watching it from its creation up to a famous auction, where people are bidding on it for great sums of money. there are things that work about the movie and things that don’t work, and while the artistic structure and plot lines are interesting in the first half of the film, by the time we reach the second half, these same ideas begin to get tired and worn out.

luckily the movie has a strategy for that, which is to save the samuel l. jackson storyline for last, and it almost works, but not quite enough. the movie starts out at an auction where we see the jackson character, Charles morritz, enter with his jacket in hand. we watch some of the bidding and see the host of the auction present the final piece, the red violin. then we cut away to a story set at a much earlier time.

this is the story of how the violin got made. it was created by a man who made many musical instruments and had them all hanging upside down from the ceiling of his work studio. the instruments are all unpainted, showing off their wooden structure. when his apprentice brings him a violin that is made pretty decently, the owner smashes it, claiming that it was a fine instrument, but not good enough for his son.

soon we see the man’s wife and learn that she is pregnant and not feeling very well. she tells her husband that she fears for her life, but he tells her that her fears are irrational. the woman goes to see an elderly fortune teller who also notices that the woman’s life is in danger. when she gives birth, the woman does indeed die. the man gets to work, harder than ever, with crafting the greatest violin of all time for his son, and painting it with careful precision.

now we cut to another story about an orphan boy living at a monastery. is this the son of the man who made the violin? possibly. he has the violin in his possession, which is reason to believe that maybe he is, but the movie never showed us how the character got from point a to point b. if it’s not the same boy, then the movie should have shown us how the violin got from one character to the next. instead, we watch the story of this boy and the man who comes to visit the monastery, and sees how talented the boy is. the man adopts the boy and brings him home to france, where he will be playing for the king in the palace of versailles. the boy shows up to play and is about to get started when he falls to the floor, dead. his body couldn’t handle the pressure.

so far, these first two stories have been very interesting and well-told. it is the next two stories that start to lose our attention. first up, there’s the story of a very talented musician who everyone comes to see. this is frederick pope, (jason flemyng), and he is a playboy who sleeps with women and keeps his fans waiting while he is in the next room going at it. there isn’t much to this story other than that he is in love with a beautiful woman, and she decides to leave him. he then meets another woman and the first woman comes back. the first woman catches him with the other one and pulls a gun. it’s an exciting moment, but other than that the story is pretty much routine. there’s nothing wrong with it, but there’s nothing captivating about it either.

and then there’s the story of a man in communist china. this is the story i had the least connection to, as it seemed to just pass right by without any relevance to the movie or the other stories that came before it. the idea here is that the army is going through houses, destroying things, and that a woman who works for the army hides the violin in order to give it to a man who she knows will treasure it.

and then we are onto the last story, which is the auction. the problem so far has really been that we don’t see how the violin gets from one story to another. we don’t see any connection, and the movie just seems like a bunch of random tales featuring one character throughout different periods of time. that would be fine if the ending revealed the connection, or showed us moments that were hidden from earlier parts of the film. something like what wild things did at the end, as its credits rolled, showing little scenes that were left out of the movie and actually glued parts together, explaining how everything really went down.

the final story with morritz (jackson) is definitely a good one. in fact, it’s probably the best story in the film, and it’s a good thing for that, because otherwise this movie was slowly getting worse and worse. but with this story, we learn of a man who has found the violin in a wealthy families collection, and is hiding from them what it really is, or how much it is worth. that changes when they start asking the right questions, leaving morritz to come up with another plan for getting at the violin himself.

the movie is good and interesting, but there is definitely something missing. i like the way we keep going back to the auction throughout different parts of the film, each time seeing a tiny bit more. i also like how there are some characters from other stories who show up at the auction, thinking that the violin is rightfully theirs. what i did not like was the lack of flow and connectivity between the stories. it makes a big difference when the whole movie seems to be about this instrument passing from one set of hands to the next, and we never get to see any of the passing. if not for that, and for some more interesting plotlines in the mid-section, this one of been a much better film.