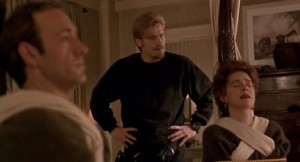 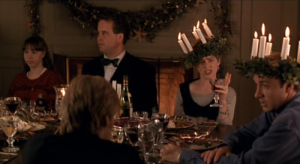 The premise is likable enough, but the humor is pretty lifeless and the storyline is incredibly predictable, both making this movie nothing memorable at all.

Not a very good movie, the premise about a robber trying to escape a town, is fine enough, but the direction the movie takes him in is more annoying than fun. The robber gets stuck with the most bickering and frustrating couple since The War of the Roses. These two never stop arguing, and the robber is forced to basically spend the movie listening to them. This movie had potential, but boy did it screw that up.

The Ref is not a very good or smart movie. It’s a film that has a simple, but enjoyable premise, but then takes that premise into the most predictable of directions. The humor isn’t very funny at all, and that really contributes to the lousy tone of the movie. Granted, Dennis Leary, who is a wonderful stand-up comic and natural comedic talent, is let loose and given the freedom to go off on rants here, but with this limited and constricting plot line, it just doesn’t work.

The movie is about a robber named Gus, who holds a family hostage. The family is composed of Lloyd (Kevin Spacey,) and Caroline, (Judy Davis.) There are other members who join them in the second half of the film, but for the most part it’s the two of them as a bickering couple dealing with Caroline’s affair and the possibility of getting a divorce. The first problem here is that there are no twists or surprises or even plot turns of any kind. Nothing new is revealed at any time during this movie. The story doesn’t unfold, but instead remains pretty stagnant throughout.

Considering that the film is basically one long therapy session between the members of this couple, with Gus caught in the middle, you would think that there might be some revelations and discoveries along that way. And I suppose there are, by the very end, in a scene with the entire family gathered around in the living room. But it ate does take a long time to get to this point, and nothing really new happens along the way. Caroline’s affair comes out in the opening scene of the movie. The same goes for the blackmailing scheme their son, Jessie, is running at his military school on a man named Siskel, (JK Simmons.) Instead of leading up to this or making it a new angle in the plot, it is presented to us the very first time we meet the son. What a waste.

The movie begins with Lloyd and Caroline in a therapy session with Doctor Wong, (B.D. Wong.) The therapist just listens and refuses to take sides despite the two members of the couple each appealing to him to do so. This is where we learn of Caroline’s affair and of her unhappiness with Lloyd. By the end of the session, the two of them are getting into a car together and heading for home. That’s when we meet Gus, robbing a mansion, and setting off a trap door and alarm system. When the alarm brings the cops his way, Gus ducks into a local store, looking for a way to escape.

His idea is to kidnap a woman and have her take him to her home. The woman is Caroline, who is in the store by herself. Gus has no idea that her husband is in the car waiting, and she brings him over to the car, where he climbs in and decides this will have to do. Of course, only about a minute later that Gus realized that he has just kidnapped the most annoying bickering couple in the world. There is immediate arguing, once Gus gets in the car, about whether or not Gus would have kidnapped Caroline if Lloyd had been in there with her, and also over whether or not Lloyd intentionally missed a stop sign.

Once they get home, Gus ties the two of them up with bungee chords, and starts to think of a plan. He’s got a partner named Murray who is still in town and looking for a way out. Gus contacts Murray and gives him the number of the house. His plan is to just wait it out here, with this family, until Murray has secured a vehicle to help them escape. Only there’s one little problem. The police are orchestrating a curfew, where everyone must be in their homes, and then they are conducting a door to door search to find the robber.

So Gus goes into hiding at the house. And that would be fine and easy, except that they are having people over. First, there’s Jessie, the son. Not only does he show up, but so does Siskel after him, to tell Jessie’s parents what their son has been up to. And then there’s Lloyd’s brother with his wife, children, and even Lloyd’s mother. And here’s where the backstory and relationships start coming out. Lloyd and Caroline have taken loans from Lloyds mother for everything they’ve bought. This includes not only the house, but also a restaurant they once opened and failed miserably at running. And the mother charges them interest on everything.

When the entire family is there, we get a ridiculous dinner with each character wearing candle headdresses, followed by a shouting match where everyone turns on everyone. You would expect some deep dark secrets to come out at this point, but no such luck. This movie has no reveals or tricks up its sleeve. What we do get, however, is character being honest with each other and also standing up for themselves. Two women become the antagonists at this point, Lloyd’s mother, and also his brother’s wife, played by Christine Baranski. The truth of the matter is, Baranski and her husband are the funniest and most interesting parts of this movie. She’s loud and confrontational and he’s the exact opposite. The idea her is that Lloyd is afraid if his mother and Lloyd’s brother is afraid of his wife, and all of this gets resolved or dealt with by the end.

The other cool thing about this movie is the town element. We really get the sense that this is a small town where everyone knows everyone. That comes to our attention through the cops who come to visit during curfew, doing door to door checks, and how excited they are to see Lloyd’s brother, who is back in town for the night. It also comes to us through a number of scenes with a guy who lives in the neighborhood and dresses like Santa, going door to door to drop off fruit cakes made by his wife. At each house he go a to, this Santa go a in and has a drink, getting more and more drunk as the night goes on.

The problem here is that the most interesting characters are the ones we get very little of. Christine Baranski and her husband are barely in the movie. They really don’t even show up until the second half. And in the case of the drunk Santa, what they show us of him is so brief each time, that we are left wanting to know more. For example, at one point we see him being kicked out of a house and yelled at. But we never actually find out what he did. And all of this is much more interesting than our couple and the robber who is holding them hostage, and just keeps getting annoyed with them. Luckily, the movie does get better as it goes on and as conflicts start to work themselves out. The humor is not very good in this movie, but the story and characters are enough to make it a decent experience.