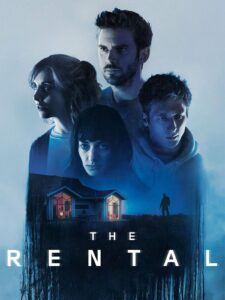 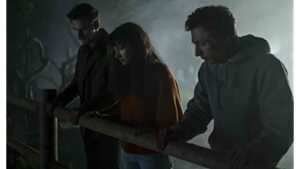 A pretty solid thriller, even though it does cover somewhat familiar territory.

Now this is how you make a thriller. You put the characters in a believable yet intriguing situation and spend lots of time just setting the tone and the mood. You also have characters and relationships that don’t even need the horror story ideas to be interesting. And so you spend half of the movie dealing with the characters and their secrets before the real scares even begin. By that time, the viewer is totally invested in these characters and has worked up an appetite to really be scared. And you make sure to not give a cop out ending, but instead go for the jugular the whole way through. This is Dave Franco’s directorial debut, and what a remarkable achievement it is.

Who knew a movie with such a basic premise would turn out to be so good? Here’s a movie that is simply about four adults (two couples,) who rent a house for a weekend and end up being attacked by a psychopathic killer. Now that storyline seems incredibly basic. And it seems like the kind of story we’ve seen again and again. After all, nearly every cabin movie (Cabin in the Wood, The Evil Dead one and two, Cabin Fever,) is about a group of friends on vacation for a weekend, renting a place, and then coming face to face with murder. And it’s always outside characters who are attacking. It’s never one of the friends, themselves, who turns out to be a killer. The Rental follows all of those usual tropes and guidelines, and yet it still manages to pull off something that feels pretty creative and original.

Aside from the Cabin movies, there have been plenty of other films about characters in a hotel or out, away from home, who find themselves being stalked and killed, from Identity to Bad Times At the El Royale to Vacancy. But The Rental offers something different from the very start, because it’s not a cabin and it’s not a hotel. This is an actual home, where the owner is leaving the place to them. In other words, it’s a really nice place (unlike those cabins,) and it’s a location where nobody else is supposed to be around, (unlike those hotel movies.) In today age of AirBnBs, where strangers find homes online to rent for a weekend, and neither the host nor the renters really know each other at all, (other than for a couple of reviews and star ratings left by people who have dealt with each of them,) this is a timely version of the classic horror material.

But the setting is only a small part of what makes this movie fun. And sure, they get as much out of it as possible, including a cliff side home overlooking the water, a jacuzzi tub on the porch, and even a secret locked room underneath the house. But that’s just the start. What really matters is the way the story unfolds, and in this one it unfolds at just the right pace. That means we don’t actually get the horrors and scary moments until the second half. And that’a a very good thing, because it means we are spending time with the characters, getting to know them, and getting invested in their lives before any of the madness begins.

Now, considering that this first half of the movie doesn’t actually have real scares in it, also means that the movie has to find other ways to get our attention and keep us interested. It has to find ways to make us care about these characters. And it does. The way it does this is by making them believable, and by making the situation feel very realistic. Specifically I’m talking about the activities they do, and the way characters react to doing them. Between the daytime hike, the characters who don’t want to go on it and stay back, the night of doing drugs, and then the second night of character not wanting to do it anymore, despite their promise, it all feels very believable.

To set the stage a little, our two couples are Charlie and Michelle (Dan Stevens and Alison Brie,) and Josh and Mina. Charlie and Mina work together at a start up tech company that has hit it big. They have found tremendous success together, and are really great partners. Charlie’s brother, Josh, is dating Mina. So there are four relationships here, right from the very start of the films. Charlie and Mina, the coworkers and partners. Charlie and Michelle, who are in a. relationship. Charlie and Josh, who are brothers. And Josh and Mina who are in a. relationship. The movie opens with Charlie and Mina planning out the trip before Josh walks in to see his girlfriend. Now there’s a lot that’s strange about this opening scene, from the way that Mina is literally learning on and hugging Charlie from behind, while he’s looking at houses to rent, to the fact that they both decide to rent the place together without speaking to their significant others first. But the movie rolls with it, and the body language between Charlie and Mina definitely gives us clues as to what we are in for, between the two of them.

The next thing we know, the two couples are in a car together driving through the woods, heading toward the rental home. That’a when Mina brings up the idea that she tried to rent the house two hours before Charlie did, and her offer was rejected, but his was approved. She believes it’s because of her last name, and that the owner is racist. And when they get to the house and meet the owner (who is actually the brother of the owner, but the caretaker, named Taylor,) Mina confronts him about this. Taylor is a little strange and makes a couple of off color jokes, like one about them only needing a telescope in the city if they are peeping toms. And then Mina asks him why he didn’t rent the place to her and things get pretty awkward. This is the first point of conflict of the movie. It’s a small one, but it is interesting, and does help us get to know the characters a little better. Especially Mina and Charlie who are on opposite sides of how to handle this situation, (Charlie wants her to drop it, but clearly Mina is out to confront Taylor about it.)

That first night, the characters go out and explore and Taylor brings a telescope in, like he said he would. Only he didn’t say he’d bring it into the house. The reason why this is strange is because once the keys have been turned over to the couples, Taylor should not be coming and going as he pleases anymore, and Mina asks the others how they feel about that. It’s just another one of those moments to make you a little uncomfortable and to set the atmosphere for what is to come. The characters plan out what they want to do for the evening, and Michelle tells them that she brought Molly. Only she doesn’t want to do it tonight. They have a big hike tomorrow morning, and she wants to save it for tomorrow night. The other characters all want to do it, and Michelle tells them that’s fine, as long as they save enough for tomorrow. And so they do. There’s a fantastic scene of the three of them dancing in the living room while Michelle is in another part of the house, in her bedroom, fast asleep.

That night, two characters end up sleeping together who definitely shouldn’t be. It’s a jacuzzi scene that takes its time to really have the characters get close to each other and then make a move. And now, they are keeping a dirty little secret from their significant others. The next morning, neither Charlie nor Mina feels up to going on the hike. And so Michelle and Josh go, leaving the other two at the house. Now here’s where things really start to get interesting. While on the hike, Josh reveals a secret about Charlie, and how he got together with the different girls he has dated, (including Michelle,) that really gives Michelle an awakening. It’s a great movie twist that you don’t see coming, because you are expecting this film to be just horror and nothing more. Turns out it has plenty more up its sleeve.

Meanwhile, back at the house, Mina finds a camera inside of the shower nozzle. They find one inside the nozzle of the other shower too, the one where they had sex in, meaning that whoever put the cameras there now has their infidelity recorded. And so they can’t go to the police and can’t even tell their partners about the cameras they found, for fear that it will lead to their partners seeing the tape of them cheating. Nice twist. When Michelle and Josh come back from the hike, Michelle is ready to do Molly. This is what she was waiting for. Only nobody else wants to do it anymore. What a bummer. These are the kinds of realistic moments and letdowns that the movie explores. And all of this before the killer ever shows up.

In the second half, he does show up, however, and the scares a pretty good. The killer basically uses the tape of the shower infidelity to isolate the characters in all different ways before he strikes. It’s only in the final fourth of the film or so that he attacks them, and it turns out to be exactly the right amount. For one thing, it means that everything that came before it was tension and build up. And those moments were all interesting too, due to the relationships between the characters and secrets they were keeping from each other. And now, when we reach the killer scenes, they do no disappoint. This movie goes against what we would come to expect, and what we would predict in all sorts of ways, including the revelation of what’s in that locked secret room, under the house. The ending is pretty morbid, (it’s the most morbid ending since Arlington Road and Drag Me To Hell,) but it works without ever making us say, “Oh, c’mon. Really?” This movie is too smart for that. It is the directing debut of Dave Franco, and what a tremendously smart and entertaining film he has made.