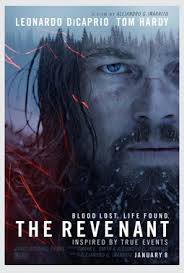 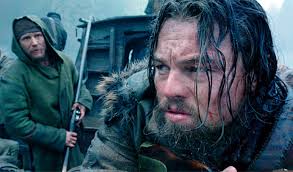 One of the most ambitious films ever made, the filming here is fantastic, and the movie itself is pretty good, but once it becomes a survival story for the DiCaprio character, it definitely gets a little too slow.

A film that is technically impressive on all levels, this movie is epic in scope and feel and really tries to push the envelope. It tells the story of Hugh Glass, a man who is helping a hunting party stay out of the way of Native Americans, when he is suddenly attacked by a bear. The attack leaves him in such horrible shape that he is barely alive, and at that point, men have to stay back with him while he recovers, as the rest of the party travels on. Things don’t go as planned, and Glass is left by himself, to survive, make it back to the others, and seek vengeance for his murdered son. The revenge storyline works. The survival one, not as much. That’s where the movie starts to get a little too slow. The movie uses incredible camera work (tracking shots, out in the wilderness,) to really make us feel like we are there, and every frame looks uniquely beautiful. It’s a good movie that works on multiple levels, but the second half definitely loses some momentum and takes the audience out of the film more than it should have.

The Revenant is absolutely one of the most ambitious movies ever made. That means it’s the movie that tries the hardest, and really puts a lot of energy and effort into being creative and different. Especially in terms of how it was made. Regarding story, the film is not a whole lot different than Cast Away or The Martian, about a man stuck on his own, trying to survive in nature with limited resources, and trying to make it back to civilization. The difference here is that this movie combines that survival genre with the revenge genre to give us even more of a storyline than usual. And yet, it doesn’t quite feel that way. The movie doesn’t feel like there is too much story, and if anything, sometimes feels like there is even too little. It’s a good film, but somewhere in the mid-section, with Hugh Glass (Leonardo DiCaprio,) trying to make it on his own, surviving while barely being able to move, the film does start to drag on.

For director Alejandro Iniritu, the movie is a technical masterpiece. This is the guy who made Birdman, just last year, which was another brilliant film in terms of camera work and innovation. Birdman showed that you can use tracking shots for nearly an entire movie, following characters around to depict only what they saw, when they turned down hallways or entered rooms where other characters were. The Revenant takes that style and technique to the next level. It continues to use tracking (not for the whole movie, the way Birdman did,) but enough to display some real skill and style. It puts these tracking shots into the wilderness. So, for example, we get a scene of the men climbing up the side of a small mountain, and pulling each other up, and the camera keeps moving backwards, ahead of the men, to show guys walk past the camera, and then extend a hand down to pull the other guys up. Even more impressive is when the tracking shots are used right in the middle of a fight with Native Americans who ride in on horseback and attack. The camera is turned into a character here, depicting the point of view of someone caught in the middle of an attack, looking all around to show us the attack coming from all sides.

Aside from the cool tracking, the movie also looks fantastic. This is the kind of thing we have been hoping and wishing for from any Terrence Malick movie made in the last ten years, (like Tree of Life.) That nature director has found himself getting too caught up on the look of the film and individual shots, without really telling a story. Iniritu finds a way to do both. Apparently The Revenant was filmed with all natural light (except for the night time scenes, by a fire pit.) That means everything filmed during the day was done with only the light of the sun. It’s one more reason why the film is so incredibly ambitious and unique. It also adds to the wonderful look of the film.

The acting is also pretty great. Both DiCaprio and Tom Hardy deliver stellar performances. DiCaprio is the actor who will win the Oscar, but Hardy is the guy to really watch. This actor plays the villain, Fitzgerald, in this film, and he is an angry and unpleasant man. Fitzgerald has been scalped by Native Americans who left him in bad shape after an attack. Glass, meanwhile, is sympathetic to the Native American cause and even has a son who travels along with them, that is half Native American. Glass speaks to his son in the Pawtucket language, which none of the other men can understand. All of this makes Fitzgerald very angry.

Glass has a job that makes him special and important to the group. Since he has lived with and studied the Native American tribes of the area, his job is to get these men from one place to another, safely, without any encounters with the Native Americans. He is a tracker and knows how to use what he can find to figure out where the Native Americans are and where they will be headed. At one point, the entire crew is in a boat, traveling along a river, and Glass tells them they need to ditch the boat and travel by foot. Fitzgerald strongly objects to this, but Glass believes it is the only way to guarantee their safety, and he is able to convince the others, as well.

One morning, when Glass wakes up from sleeping on the ground, he finds himself staring at a bear, off in the distance. Before he can fully wake up, stand up, and get prepared, the bear is attacking him. This bear fight is incredible. The movie films it as if it was completely real, and not glamorous at all. That means no far shots or wide shots of the whole thing, but instead, close ups and unsteady camera work, to make the event feel like something we are actually witnessing. The camera gets right on top of the bear, and finds Glass struggling beneath it. As if the movie wasn’t technically eye-opening enough, this bear fight might be the coolest use of effects yet. When watching it, one has to be in awe of how the scene was actually made. Was a real bear used on a dummy, and then Dicaprio superimposed? Nope. It’s computer effects at their finest, and they couldn’t look more real if the movie had actually used a real bear to attack the actor.

Glass is left in bad shape, barely alive. The men in the group have to carry him around on a wooden stretcher. After a while it becomes obvious that taking him along with them in this way is doing no good for either the recovering Glass, or the struggling men. The decision is made to leave Glass with three men who will be paid extra to stay with him and watch over him. How in the world they allow Fitzgerald to be one of those men, I have no idea. The Captain of the group, Captain Andrew Henry (Domhnall Gleeson, from Ex Machina,) does speak to Fitzgerald before leaving him, to make sure the man understands that he is being trusted with this, but even still. The other two men staying, (Glass’ son, and then a young man who seems very green and innocent with the world,) both offer to stay on with the wounded man for free. Fitzgerald insists that he needs the money and that this is the reason why he is so anxious to take on the job.

Well, one day Fitzgerald decides he’s had enough of staying around this wounded man, and he decides to kill Glass. He begins by asking Glass to wink if he wants to be put out of his misery. Glass tries to keep his eyes opened for as long as possible. When he finally can’t keep them opened, without blinking, anymore, he shuts his eyes completely, making sure to not open them again. Fitzgerald doesn’t care. As soon as he sees Glass’ eyes shut, he jumps into action. Glass’ son is there at the time and tries to stop Fitzgerald, leading Fitzgerald to kill him. When the young man who is also in their party, returns from the river where he was fetching water, Fitzgerald tells him that Glass has gotten worse and that his Native American son has run off and left them. There are a lot of problems with this part of the story. First off, why didn’t Fitzgerald kill Glass as well, after he killed the son? The movie should have made that more clear, like maybe he was about to, but then he saw the young man returning and stopped himself. An even bigger problem is that the guys never find the body of the Native American son, leading us to believe that Fitzgerald hid it well. Only later on, after they have buried Glass and left him for dead, Glass crawls out of his hole and, barely being able to move, still manages to find and crawl over to the body of his son. So obviously the body wasn’t hidden that well after all.

At this point, we are only about halfway into the movie, and it’s where the film takes a turn. So far, the movie has been great. Everything that happened was either stunning and impressive on a technical and artistic level, or just really exciting, character-driven, and plot oriented. Now, all of that is about to change. The movie becomes the story of Glass surviving on his own, and like Cast Away, it suddenly becomes very slow. There are certainly some cool moments up ahead, like one where Glass sleeps inside the dead carcass of a horse, in order to keep warm. But for the most part, the second half of the movie loses the momentum that the first half has going for it.

Luckily some energy is able to be brought back for the ending, which becomes a standoff of sorts between some of our main characters. Still, the problems in the second half definitely added up to drop this film a few pegs short of where it seemed like it was headed. The movie is still great. Like Mad Max: Fury Road, (the other great Tom Hardy film from the same year,) it is a very cool, very rough and tumble, gritty film. It is certainly entertaining and visually stunning. But it does hit patches of being a little too slow. For the director, the film is another masterwork of success. There is definitely an epic feel that the film carries with it around every corner, making this movie an absolutely unique experience.