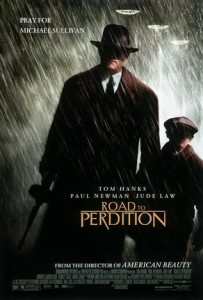 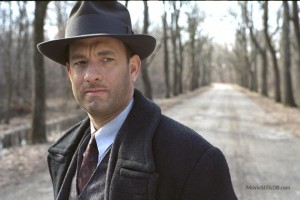 An interesting and artistic film with a different take on the hit man with a change of heart story.

Road To Perdition is an unusual movie. Yes, it follows the formula of a man who starts out on one side and then finds the people who were his former associates now coming after him. but it’s not so much about a man who suddenly changes his stance, but about a man who is out to protect his son instead. tom hanks plays michael sullivan, a hitman who works for Mr. Rooney (Paul Newman in his last great role). one night his son sneaks into the car, witnesses a murder, and becomes a target of the organization as a result.

Because of what the son witnesses, the other hitman who is there along with sullivan, a man named connor, played by daniel craig, decides to take out the whole Sullivan family. connor goes after them and executes the mom and child who are at home when he arrives. the boy who witnessed the murder, michael jr., is not at home at the time, and he and sullivan meet up later in the night to go on the run together.

an important theme of this movie is father’s and sons. connor is the son of mr. rooney and he is a screw up. he is immature and selfish and drinks all the time. he is also jealous of the bond that sullivan has with his father. mr. rooney treats sullivan like a son even more than he does for connor. there’s an early scene of mr. rooney and sullivan playing a duet on the piano together as connor stands there watching, looking miserable. clearly, sullivan is the son that mr rooney wished he had.

and it’s because of this jealousy that connor goes after sullivan’s family. he hates sullivan so much that he uses the son witnessing the murder as an opportunity to get rid of sullivan once and for all. he then goes after sullivan’s whole family. Upon returning to the house and finding his wife and child dead, sullivan knows what he has to do. he has to protect his other son, michael, and he has to kill the man who killed his family.

So far we have a pretty interesting premise about two different families and how they start out close, but end up having conflict. it almost sounds like something from shakespere. but where does the movie go from there? Another movie would make it all about sullivan vs connor and have the two of them engage in chases and shoot outs. this one has connor practically drop out of the picture, to be replaced by some new ideas that move the story in a different direction.

Sullivan and his son go to see the right hand man of head gangster al capone, a man named frank nitty (played wonderfully here by stanley tucci). sullivan wants to work for nitty in exchange for nitty turning a blank eye to what sullivan is about to do…kill connor rooney. nitty refuses to do that and as a result, sullivan decides to go on a bank robbery rampage, targeting only capone’s money that is being held in banks.

One moment that i love in this movie is when nitty leaves the room where he was speaking with sullivan and then enters another room where mr. rooney waits for him. mr. rooney is not a soulless bad guy, but instead is conflicted and uncertain of what to do. He asks nitty for advice, knowing that he doesn’t want to kill sullivan, but at the same time he doesn’t want to turn his son over to the man. Nitty advices him to treat sullivan as just any old guy, and to go after him. think objectively.

and so nitty calls in jude law as another hitman who will be hired to kill sullivan and his son. i suppose this plot line is somewhat like the replacement killers or any other movie where the main character hitman betrays his employer and the employer then calls a new hitman to come after him. But law is a fantastic original chracter who acts as a photographer of dead people when we first meet him and even kills one of the people himself.

the movie now becomes about hanks vs law. jude law takes over for daniel craig in the second half of the movie as the main villain. i like the way the movie does that, giving us two different villains to switch off between. i also like how artistic this movie is. there is constant use of slow motion and fantastic scenery. the movie is set in the late twenties, right around the time of the great depression. and director sam mendes (making his follow up film to american beauty here) captures that very well.

road to perdition might have a few bumps from time to time, including an ending that could have been stronger, but ultimately it’s a pretty great film. the plot involving fathers and sons and witnesses and betrayal is really fantastic. so is the way tom hanks carries his role as a man who loses everything and decides to fight back. the story and plot twists are very strong and the look of the film s fantastic. it’s a very dark story, but it’s also very powerful.