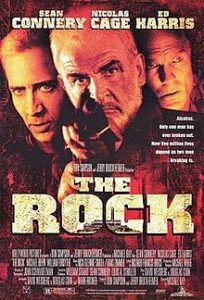 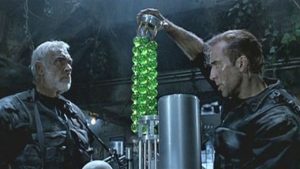 Its Die Hard on Alcatraz, and one of the coolest, sleekest action movies of the nineties that still holds up, at least in terms of B movie style, guilty pleasure fun.

There’s a reason why this movie is still talked about today, at least in terms of good guilty pleasure action films. This one represented the best of what they were doing in the nineties, with this genre. A smart, tight action film, with killer music, fun one-liners and jokes, and plenty of atmosphere. The story involves a general holding hostages on Alcatraz Island in San Francisco, while threatening to launch rockets with deadly nerve gas into the San Francisco Bay Area, unless his demands are met. Enter a chemical weapons expert, (Nicholas Cage,) and an old convict who once escaped Alcatraz while a prisoner there, (Sean Conerey.) The story itself is a unique take on the Die Hard formula, in all kinds of ways. One is having the villain, Major Hummel, (Ed Harris,) be extremely sympathetic. Another is using a man Connery’s age as an action star. And the movie takes its time with the setup, before getting our heroes onto the island, which turns out to be a very good thing. It’s not the brightest movie out there when it comes to believability, but this one sure is a lot of fun.

The Rock is a killer action movie. It’s one of those movies that isn’t especially smart, but somehow finds the perfect combination of actors, characters, action scenes, music, and atmosphere. This is a Michael Bay movie, and considering that the man has made so many Transformers movies that his name has become a joke, or synonymous with awful films, it’s amazing that he made this one. Back in the nineties, when this movie was made, Bay was actually a good director. He had three good movies… Bad Boys, The Rock, and Armageddon. The Rock is by far the best of the three.

Like all Bay movies (and Jerry Bruckheimer produced movies from this time,) the movie uses orange filers for it’s look. Here, they are used all over San Francisco, and look amazing when showing the water around Alcatraz and the Golden Gate Bridge.. The city has never looked better. This movie oozes atmosphere. Its got the perfect combination of colors in every frame. Just look at the green string of pearls, glass globes filled with poisonous gas. Make those any other color and they don’t have the same feel or look. But this movie knows exactly what it is doing. The same can be said about using Alcatraz Island for a prison to hold hostages. What a brilliant idea. So simple, yet so brilliant.

The movie is about a Marine Captain, Major Frank Humell, (Ed Harris,) who has gotten fed up with sending his men on top secret missions, watching them die, and then seeing them not recognized as military heroes at their funerals. Their families aren’t even told how they died. There is no compensation given to the families. And these men aren’t given military funerals. Hummel is tired of it. He’s taking a stand. And that means working with a bunch of mercenaries to break into a military chemical weapons lab and steal those green pearls filled with poisonous gas. It means setting up rockets on Alcatraz, containing the pearls, positioned to launch into San Francisco, if his demands aren’t met.

The movie opens with Hummel setting his plan in motion, and starts by showing rainy day graveyard scenes of both his men being buried, and also him going to his wife’s grave. It plays with this amazing soundtrack, written by Hans Zimmer, and really gets us into Hummel’s motivation. We move from the graveyard, where he puts his metal on a gravestone that simple says, “His Wife,” to the weapons facility at night, where Hummel and his men break in and kill a number of security guards. This is a pretty cool scene, with men ziplining into the area and lots of rain coming down. And not only do we see what Hummel and his men are up to, but we get a little preview of what these green balls can do, when one of them gets loose.

And after all that, it’s time to meet Stanley Goodspeed, (Nicholas Cage,) our protagonist. The movie has already gotten off with an exciting start, exposing us to the villain, and letting us sympathize with him (Harris’ voice over here is great.) But now its time to reign things back in a little bit with Goodspeed’s story. And that starts with some comedy involving plastic guns that he and his protege shoot around the room when bored. This is the perfect Nicholas Cage role where he gets to mouth off one liners that are very over the top, yet still act like a normal guy while doing it. Cage, (like Bay,) has since become a bit of a joke with his over-the-top antics, but in this movie, he was hitting the marks perfectly. In fact, in many ways this is the movie that transformed Cage’s career. Sure, he won an Oscar just two years prior for Leaving Las Vegas, but the Rock was his first action movie, and marked the start of a path that would characterize the choices he made throughout the rest of the nineties, (Con Air, Face Off, to name just a few.)

The movie has the FBI bring in Goodspeed to talk about what these chemical weapons are that Hummel has stolen. Ands then they bring in a character named Mason, (Sean Connery,) who was formerly British secret intelligence, and has been locked up for the past thirty years. And we get to see all of this. From the idea of getting Mason out, to them actually going to do it, to them talking to Mason about the situation and getting him to cooperate. And by cooperate, what we mean is come along. You see, Mason is the only person to ever escape Alcatraz. So he knows the ways in and out better than anyone. And they can sure use his help on this mission to break in there, diffuse the bombs, and defeat the General and his men.

It takes a while before the characters get to Alcatraz, and that turns out to be a good thing, because it means more action scenes in the San Francisco area. At one point, Mason throws the head of the FBI, Womack (John Spencer,) over the side of a building, hanging from a rope around his arm. At another, Mason steals a humvee and leads a car chase up and down the street of San Fran, complete with trolley car getting in the way and everything. San Francisco is the ultimate city in to do a car chase, because of it’s extreme hills everywhere you look. The French Connection is the go to movie for any car chase, and that movie did it in San Francisco. The Rock definitely gives them a run for their money. At one point, Goodspeed decides that he, personally, is going to bring Mason down, and so he steals a Ferrari. And then he drives it through the window of a garage. This all makes a very fun scene.

And then after a while, our characters do make it to Alcatraz. From that point on, the movie stays there. It’s somewhere close to the half way point or so, but in many ways, this is where the real movie begins. This is John McClane first taking on the terrorists in the Nacatomi building in Die Hard. That’s right. This movie is up there with some of the best terrorist fighting movies of all time. It isn’t huge on hand to hand combat or anything, but it does a great job with weapons and creating clever action scenes. There’s one that takes place in speeding mine carts racing down an old wooden track, like in Indiana Jone and the Temple of Doom, Then there’s another in metal bucket-like container carts that hang from an above track and carry our heroes along while they are firing in the air, propelling the containers to move. And these are just two examples. There are scenes in a morgue, involving gunfights while hiding behind furniture. It is all pretty fantastic.

Now, there are definitely criticisms to be made of this movie. Other than our three protagonists and stars,, (Cage, Connery, and Harris,) none of the other characters really seems three dimensional. None of the bad guys working for Hummel is given enough to do, (David Morse, as his right hand man, probably comes the closest,) and none of the SWAT team members that go in with Goodspeed and Mason is very memorable either. On top of that, for everything great this movie does with atmosphere, there are also some definite flaws. In a scene where Goodspeed is having sex with his girlfriend, at their apartment, it is meant to look like they are on a rooftop, but is very clearly a soundstage. And some of the rooms on Alcatraz Island don’t really stand out much compared to others. Setting a scene in the shower room is a good idea, but the morgue, not so much. How about a scene in the mess hall? The more distinctive the room, the better. Another flaw is that there are far too many shots of characters speaking where parts of their head are cut off. Bay likes the closeup a little too much, to the point where he often doesn’t fit character’s entire heads on the screen. This is something that lots of movies do, only with Bay and this movie, he is definitely overdoing it.

But for all the flaws, they are pretty minor compared to how great this movie works in terms of story, energy, atmosphere, action, and music. This really is one of the best action movie soundtracks in ages, (the other great one from around this time was in Speed.) And Bay’s frenetic way of shooting, using rapid fire cuts, works very well here. The movie has a lot going on, and yet it moves fast, has character rattling off fantastic one-liners, and finds a place for some comedy too. There’s a reason why this movie, and also The Long Kiss Goodnight, are some of the better action movies of the nineties. Style. The characters might utter silly lines sometimes, but they are fun, and make us laugh. It’s far different than the usual cliched characters that we tended to get in action movies during that time, (such as in Broken Arrow.) The Rock isn’t a great movie, but it sure is a hell of a lot of fun.