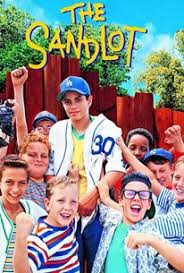 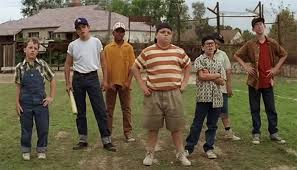 This is a coming of age movie that represents a certain time. It’s a movie about kids in the fifties, developing friendships and dealing with problems together. And unlike some of the more serious movies made on the same topic, (such as Stand By Me,) which address problems the kids might be having at home, this one is simply about their bonding with each other. That’s both a positive and a negative. The positive is that the movie never gets too heavy, and is just light-hearted fun with a sense of humor. The negative is that the movie suffers slightly from lack of conflict. There’s really only one major conflict, and it happens in the later parts of the film. Up until then, this is just a feel good, entertaining time on the baseball field.

The Sandlot is a fun movie about a simple time. The time was the fifties. It was a time when kids spent their days outside, playing with each other and having adventures. There have been some great movies made about this time, and they often chronicle growing up through the story of kids. Be it the adventure seekers of Stand By Me, the scientific dreamers of October Sky, or The Sandlot, which is simply a movie about kids becoming friends and bonding over baseball. The time period and music of that time definitely lend themselves well to telling these stories about youth and capturing a more innocent, yet also more dangerous kind of atmosphere.

In The Sandlot, the story is narrated by Smalls, a young boy of about ten, who moves to a new neighborhood two weeks before the summer. Smalls tells us how this was the worst possible time to move, because it did not give him any kind of opportunity to make friends before the summer began. And so he found himself stuck in a house with his mother (played by Karen Allen,) and step father, Bill (played by Dennis Leary.) Smalls knew that baseball was a popular sport, and was important to a lot of people, (including Bill,) but he didn’t know why. He was a kid who had never caught or thrown a ball before, and had no idea who Babe Ruth was. Boy was he about to learn.

With an interest to get outside and join in with what the local kids were doing, Smalls decided to take up baseball. Only he had no idea how to play, and so he asked Bill to teach him. But even that wasn’t so easy, with Bill continually brushing him off. Eventually the boy’s mother got involved, and that’s when we got to see exactly how bad Smalls was. He went outside with Bill to throw the ball around, and with his first throw attempt, Smalls decided to run it back to Bill and put it in Bill’s glove. With his second attempt, and Bill telling him, “throw it back this time,” Smalls tried, but the ball barely left his hand before plummeting to the ground. And when Bill insisted that Smalls hold the glove up to his face, Smalls got hit in the face by the ball and had to go inside, injured. Things definitely weren’t off to a great start.

But Smalls didn’t give up, and he went to the baseball field, (called the sandlot,) where the local kids were playing, anyway. Smalls recognized Benny, the best player on the field, as the boy who lived next door to him. And Smalls was pretty much there just to watch. But when a ball came his way, and Smalls had to throw it back, he found that not only was he terrible, but also embarrassing. The kids on the baseball field laughed and gave him a hard time, but Benny didn’t give up. Instead of hanging his head down, Benny ran over to Smalls and gave him some pointers. Smalls tried out Benny’s advice, and the next thing you know, he could play.

The story chronicles Smalls meeting these kids, learning to play baseball, and starting to fit in. But it also tells us about the way these kids would hang out away from the baseball field. There’s a great sequence, for example, where one of the boys in the group has a major crush on an older lifeguard. He drags his friends to the pool where she works, and tries to get her attention, but to no avail. That’s when this boy enacts his plan. Let’s just say it involves pretending to drown and go unconscious in order to get CPR and mouth to mouth from the girl of his dreams. It might not be politically correct or appropriate, but for a little kid, this kind of thing is daring and fun. It makes for some pretty good comedy here.

The pool scene is the closest these kids ever get to a girl during the course of the film, but they have fun in other ways too. At one point they all have a sleepover in a clubhouse. That’s when the catcher is sitting around making s’mores and Smalls comes over to ask questions about them. The boy asks him if he wants s’mores, and Smalls responds, “do I want some more what?” It goes back and forth like this for a little bit, before we get the classic line from this film, “You’re killing me, Smalls.”

While not much conflict happens after Smalls joins the group and is welcomed in as one of them, an issue does arise in the second half of the film. This one involves a baseball. Benny hits the ball they are using so hard that it wraps right out of the seams of the cloth that the ball is wrapped in. Without a ball, the kids can’t play. Only Smalls has an idea. He knows that Bill has a prized baseball in his trophy room, and that Bill is out of town for the weekend. Without hesitation, Smalls runs off to get the ball ands brings it back to the field. His plan is to use it for the game, and then return it to Bill’s trophy shelf. Only that plan goes horribly wrong when the ball is hit over the fence behind them, where a dog, known as The Beast lives.

Smalls is sad because he knows the ball is important to Bill, but he has no idea just how important it is, and why. He tells the other kids about how a woman signed it. A woman named Ruth. Baby Ruth. And the kids go nuts. This is the legend that they always talk about, referring to him by every name imaginable besides his own. The Great Bambino, the Sultan of Swing. Things like that. Smalls has heard of this guy, from them, but didn’t realize that he was the guy who signed Bill’s ball. Now Smalls, and the other kids, embark on a mission to get the ball back.

The ball issue becomes the big conflict of the second half. These kids try everything they can think to get the ball either under or over the fence. At one point they even use three vacuum cleaner to create a catcher’s mask that will suck things up. And the ball does get sucked up into the mask. But that’s when the dog comes out and eats the mask and contraption up. There plans and ideas are all failures, one after another, until Benny decides to try the most daring plan of all.

The Sandlot is a good movie. It’s funny and light-hearted, and like The Mighty Ducks, (also made around this time,) the movie is one that holds a place in a lot of people’s hearts from when they were kids. This is one of those movies that represented a generation, (even if it was made about kids in the fifties.) We still grew up with these kids and with their ridiculous ways of bonding and having fun. On those levels the movie works. Where it doesn’t work is that there is not enough conflict. In fact, the whole middle of the movie, between Smalls joining the team and the prized baseball going missing, is filled with no conflict at all. This movie isn’t about one big problem that takes the course of the movie to solve. It’s about having fun and being a kid, while on the baseball diamond. And as a laid back, kind of campy, fun movie, it definitely works.