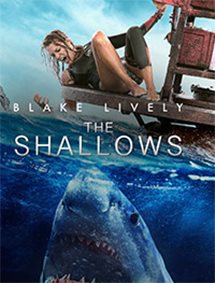 A pretty intense thrill ride of a movie.

A great thriller, this movie exists on a very simple and straight forward premise, which is what makes it all the scarier. A girl goes out to surf and while riding a wave learns that there’s a giant shark in the water with her. She can’t get back to land and she’s all by herself. She then spends pretty much the entire movie on a rock, trying to come up with a plan. Luckily the movie does give us a few other characters, many of whom fall victim to the shark. This is what adds to the scares. Blake Lively carries the movie, as practically a one-woman show, and the result if very exciting.

The Shallows is a pretty cool movie. It’s a one woman all alone, up against a shark movie, which puts it in the same kind of ballpark as Cast Away or Gravity. Now, each of these movies has little tricks to make them feel like they are not just one actor on screen the entire time. Moon, for example, used a robot voiced by Kevin Spacey, to be a secondary character. The Martian cut between Matt Damon all alone on Mars and tons of characters back on earth trying to rescue him. Gravity featured costar George Clooney for a solid portion of the movie. And Cast Away gave us Helen Hunt as the fiancé to Tom Hanks.

So The Shallows is in good company, and like those other movies, it also has a few tricks up its sleeve. It gives us other characters in very small doses. There’s a man who drops Nancy (Blake Lively) off, on a beach, where she plans to surf over to a secret island. There’s the man who finds her things laying in the sand and then goes out to meet the shark himself. And there are the two young surfer guys who she meets in the water. It’s not a whole lot, in the ways of other characters, but it does the trick, in making us not feel like we are truly all alone for the entire duration of the film.

On top of that, there are also brief flashbacks which are thrown in throughout the movie. These are often  used to help with the passage of time. So when Nancy falls asleep on a rock, we get a flashback to show us some of her backstory, before she wakes up in the morning. The backstory is about Nancy, her mother, and where she is now, in her life. The flashbacks explain how Nancy got here. Apparently she was all set to become a doctor until her mother suddenly took ill and died. It seemed to come out of nowhere, and hit with such devastation and surprise that Nancy gave up her goal of becoming a doctor, all together. She just lost her faith. You can imagine, she probably prayed for her mothers health, every night, and her prayers went unanswered. So she gave it all up and came out here, to the beach.

This beach has meaning. It’s about Nancy’s mom. We learn this at the start of the movie. Her mother came to this beach and this island when she was pregnant with Nancy, and took a picture of it. Then she put the picture in a locket, gave Nancy the locket, and told her stories about the island. Nancy always dreamed of seeing it for herself, and when her mother passed away, she decided to make it a priority. The island is a secret. Just like in the movie The Beach, with Leonardo DiCaprio, no one talks about this island, and very few people even know about it.

The actual story to the movie really gets started right away. This film doesn’t waste any time establishing back story or character, and instead, gets right to the point.. It starts out with Nsncy being given a ride out to the beach. She does tell the man driving her, about her mother and the island, but it is all very quick, literally told in flashes, and by the time she teaches the island, it seems we are just beginning to put the pieces  together.

Once she gets to the beach, the man drives away, and Nancy is left there all alone. She’s excited. She puts down her stuff, waxes up her surfboard, and stares out at the open water. There are two guys out there, already surfing.  They call to Nancy for her to come join them, but she rightfully hesitates, and tells them she’s okay where she is. She keeps her distance, and shouts to the guys for some brief conversation, before they all start surfing. It isn’t long before the three of them are all together, after all, and then the guys leave, all done for the day. Nancy wants to stay out a little longer.

That’s when the shark comes. Nancy makes it to the island and settles down there for a bit and we start seeing silhouettes of the shark moving through the water. At one point, it comes while Nancy is surfing on a wave and the shark moves right through the wave, very close to Nancy, without her even realizing it. But then when she gets onto a rock, the shark jumps out of the water and bites her on the leg. Nancy escapes its jaws, but her leg is badly cut and bleeding. She rips some clothing and ties it around the injury to stop the bleeding, but there’s a problem. Nancy now knows that there’s a shark in the water.

The cool thing is that she is very close to the land. It’s right there, just a quick swim away. But unfortunately the shark is in between her and this land, and so she’s stuck on the rock. Nancy sleeps there, and the next day, a man comes to the beach. Nancy gets his attention, but instead of helping her, he steals her things. Then he wanders into the water. Big mistake. The shark has his way with the man, and its pretty brutal. Let’s just say, the man doesn’t end up in one piece.

That leads to the kids from the day before. They come back too and also get into the water. This leads to more problems. Nancy decides to swim to a nearby buoy where there is a flare gun inside of a metal box. Then she starts taking on the shark, one plan at a time. Watching the shark do everything it can to get here is pretty amazing. It’s a great climax to an already very exciting movie.

The Shallows is a movie that doesn’t disappoint on the thrills. Here’s a film that really gets the shark scaring element right. It’s not that the movie is incredibly smart or anything, but more like a B movie that you go to see for fun, as sort of a guilty pleasure. And it works. Lively holds our attention for the entire movie, and we sympathize with her in this situation. The film is smart to offer up some sacrifices to the shark, showing us what it is capable of. We definitely feel vulnerable while watching it, just like Nancy does. This movie is extremely entertaining.