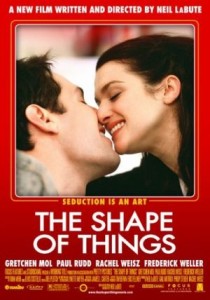 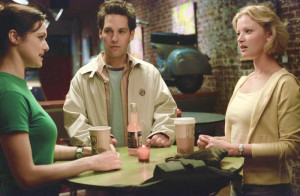 An interesting movie about an angry girl who dates a guy below her league and wages war on his friends.

The Shape Of Things is a movie about a nerdy guy who falls for a hottie. only it’s not just a regular romantic comedy like that premise would lead you to believe. this is actually a dark and even disturbing drama. it’s about a character who is pure evil and takes advantages of others with the interest of hurting them. this movie was written and directed by neil labute, and it’s kind of like a more detailed version of his earlier film, in the company of men. labute has actually made three movies that areall about the battle of the sexes. it’s his angry sex and romance trilogy, and his second film, your friends and neighbors, is the only one that is an ensemble piece. The Shape Of Things rounds out his trilogy by making a woman the evil character, as opposed to chad, the corporate powerful man, played by aaron eckhart, in labute’s first film, in the company of men.

aside from making these angry movies where people use and intentionally try to hurt each other just to make statements, labute also writes plays. in fact, most of these movies either were plays first or could easily be turned into a play if labute chose to. that’s because, like david mamet, labute is a playwright first and a movie director second. when he tries to direct a movie that is nothing more than a movie and in no way a play, like the wicker man with nic cage, he tends to fail miserably. but with this trilogy of plays turned into movies, all thee films really work.

they are story driven films that are loaded with dialogue. the stories are very simple on the surface, yet very deep in their meaning. The Shape Of Things, in particular, was a well-known play before it was a movie, and paul rudd was the star of the play. he reprised his role for the film, and he does a nice job with the part. this is such a different kind of role for him, considering that rudd ussually plays the cool slacker guy these days. i recently saw him in our idiot brother, where he played the ultimate slacker dude. but in The Shape Of Things, he is given the chance to really stretch himself and rise to the occasion.

rudd plays adam, a nice guy security guard at a local museum nearby the university he is attending. in the opening scene of the movie, he meets evelyn, another student at the school, who is about to destroy one of the statues. he is there, at the museum, with a can of spray paint, staring up at a naked statue. evelyn is angry that the museum has chosen to cover up the statue’s penis with a fig leaf that was never part of the original sculpture. she plans to retaliate with spray paint.

for a while she and adam discuss the statue and her intentions and they argue back and forth. but mostly it is all kind of playful. that’s because instead of getting angry with evelyn and kicking her out, like his job is to do, he is just so attracted to her. he can’t believe this woman can be so free spirited and so determined. what he doesn’t seem to realize is that she’s actually crazy. but adam has blinders on, and he asks for her number. when she spray paints it into his jacket, he again is too infatuated with her to be angry.

and so the two of them start dating. and little by little, adam goes through a series of changes. first it’s him losing the glasses and getting rid of his brown coat. then it’s things like his hair, weight, and even nose. evelyn is reshaping him, and adam admits to letting her do that, because he feels so good about himself. in the end, i know it sounds bad for someone to change the way somebody else is, but if it’s changes that are for the better, than is it really so bad? i mean after all, evelyn took adam the nerd and made him into adam the cool looking, well-dressed guy.

but the fun scenes aren’t so much the reshaping and changing scenes. instead, they are the conflict scenes that come out in dialogue. adam as two very good friends that are a couple. they are phil and jenny, and in fact they met because of adam. phil was his roommate in college and jenny was in one of adam’s classes. adam never had the guts to ask her out, but one day phil came to pick him up from class, saw jenny, and the rest was history.

and now the two of them are getting ready to get married, and having doubts, and suddenly adam walks in with this new girlfriend. and evelyn doesn’t care who she argues with. when the topic of the statue at the museum comes up and how the person who did it must have been just trying to trash something beautiful, evelyn goes off. she is, of course, the one who did it, and she can’t reveal that to this couple, but she certainly defends the person who was responsible. she claims that whoever did it was definitely trying to make a statement. it gets to be a pretty heated argument and very uncomfortable. it’s also one of the best scenes in the movie.

another great one is again with this couple later on. adam and jenny have had an interesting situation happen to them and now evelyn invites them both to a coffee shop, without either of them knowing the other one is coming. that’s when evelyn not only tells them that she knows all about what happened, but also that she has some secrets of her own about phil. this is great stuff. and it’s not even the climax and the final surprise.

the end of the movie is where things get the darkest and all the secrets finally come out. but this movie had plenty of surprises and uncomfortable moments splattered throughout. rachel weisz was wonderful in her role, playing such an evil character, and enjoying every minute of it. and even the two friends were a lot of fun. neil labute is a very talented filmmaker, and with this movie it really feels like he was trying another version of in the company of men, the same way guy ritchie tried another version of lock, stock when he made snatch. sure, there were plenty of differences, but the underlying themes are all the same. and in the cases of labute and ritchie doing this, all four films were great successes. i never have a problem when a director wants to improve on his work and try the same kind of thing only in a different way. The Shape Of Things might not be better than in the company of men, but it is certainly an interesting version and take on the same kind of story.