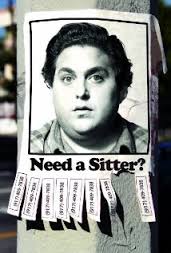 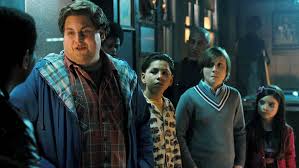 An occasionally funny, but mostly kind of dumb mix of Adventures In Babysitting with nick and Norah’s Infinite Playlist.

The Sitter is the latest Jonah hill movie, and it’s probably the first one where he really is the only star. Sam Rockwell appears in it, but just briefly for a couple of scenes. there is no real costar here. this is the movie that shows that Jonah hill can headline his own movie. unfortunately it’s not all that good.

hill is a very funny and talented comic actor. He got his big break with Superbad, and before that was really just a small side player. he was one of the friends in knocked up and the fat friend in accepted. but these roles weren’t very memorable. With Superbad, he finally arrived and was the highlight of that film. he played a guy who wasn’t afraid to call things the way he saw them and to be totally graphic about his take on the world.

since then, that has kind of become the go to Jonah hill role. Sometimes he plays the straight guy, like in get him to the Greek or Moneyball, but more often he’s just some crazy loon, like he is in Cyrus, or here, in the sitter. the premise to the movie is about as simple as it gets. This guy, Noah, has to watch a bunch of little kids for the night and ends up taking them into the city because he’s trying to get with a girl.

of course none of it makes any sense at all when you actually think about it. even if he was going to sleep with this girl who he fantasizes about, what does he expect the kids to be doing while he’s with her. I suppose the humor of the premise is supposed to be that this guy almost forgets about the kids completely. he does exactly what he would be doing if the kids weren’t there, and he just brings them along.

there’s no surprise that these kids get into all kinds of stupid trouble. one of them is an explosives expert. how does that happen? they try to justify it by saying he’s from another country and was adopted. then the other boy (played by max records from where the wild things are), is a social outcast who has a lot of psychological and anxiety problems and is constantly nervous and on edge. fun. the third kid is a girl who wants to act like a wild and crazy adult and talks about dressing hot all the time. none of this is all that great.

it’s a testament to hill that the movie isn’t awful. especially considering that the plot really doesn’t have anything fresh or interesting going for it. I suppose Sam Rockwell is funny, talking about his best friends all the time. he’s the friendly drug dealer who is into a lot of very strange things. One of the kids steals a dinosaur egg from Rockwell’s house, for example, which apparently was filled with cocaine.

The story of the film has the kids and Noah just going from place to place. Hill’s first mission is to buy drugs from Rockwell and bring them to this girl he likes. she’s at a party somewhere getting wasted. The same actress who played the drunken friend in nick and Norah’s infinite playlist plays this girl, Marisa. That movie was infinitely better than this one, simply because of its little creative details every now and again.

and yet both movies follow similar plot lines. both films are about traveling all over New York city, during one wild night, chasing after something. In nick and Norah, they were trying to find a band, chasing after clues. the sitter is also about one wild night in the city, only the things that happen to them aren’t all that much fun. the girl Poops in her pants and needs to get new underwear. It’s kind of dumb, definitely gross, and is only forgivable because it leads to the funny moment of Noah talking to a little girl about her underwear and other adults overhearing him.

When the Hispanic little boy (the explosives kid), ends up stealing something from Rockwell’s house, the movie becomes a chase. now Rockwell and his buddy (Leon, from Curb Your Enthusiasm), are after Noah. suddenly this movie has become date night, adventures in babysitting, or any other movie that is just a chase around the city with scary guys coming after out hero. the problem is, all of those other movies did it better.

The Sitter is a watchable movie. that’s because Jonah Hill is a natural comedic talent, and also the film’s director, David Gordon Green, knows how to handle comedy. he’s the guy who directed pineapple express and your highness. unfortunately, the sitter is a low Point for both him and hill, but their natural ability to make a funny film is still there. it’s a good thing it was these two guys making this movie, because in anybody else’s hands it would have been terrible. I do like that the movie tries to be different with its character. For example, Noah isn’t the kind of guy who is going to get into a fistfight at the end and win. so instead he comes up with another idea, and it’s definitely interesting. let’s just say, by the end of his fight scene he has made a lot of friends. it’s an average movie, decent at times, but overall nothing memorable.