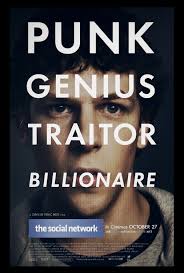 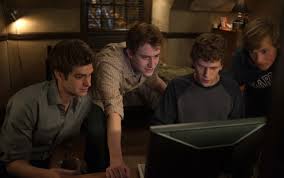 An intriguing story told with great style and intensity.

The Social Network is a movie that is so witty and so well made that it is probably the coolest film of the last few years. that’s not to say the best, but the coolest. the one that most gets in touch with the youth of college life and beyond and shows us how one nerdy kid at harvard wanted to fit in with the cool kids and so he used his intelligence to create something that would make him a billionaire king. the fact that this is the story of how and why facebook got made is interesting enough, but what makes this movie even better is that it’s the story about students stealing from each other, and a friendship betrayal. it might be a true story, but it feels as intense as anything that could be made up.

Credit that to both the screenwriter, Aaron Sorkin, and the director David Fincher. Sorkin knows his way around court room dramas. he’s the writer who penned the Tom Cruise / Jack Nicholson military courtroom film, a few good men. and while the social network might not be a courtroom drama per say, it certainly has a lot of hearing scenes, mixed into the rest of the movie, helping maintain the quick pacing and immediacy of the flow.

And Sorkin’s screenplay in Fincher’s hands is absolute gold. Fincher is the darkly stylistic director of seven and fight club and he knows a thing or two about atmosphere. but his best movies have always been about criminals and criminal activity. he makes films about the shady underworld. and he brings that same mentality and approach to this movie about overprivileged college kids. fincher has every scene lit with perfect yellows and blacks. he loves filming at nighttime and seeing how much that adds to the shadows and conspiracy-like atmosphere. he basically creates a film noir set in the world of computer hacking and university life.

at the very start of the movie, Harvard sophomore mark Zuckerberg (played by Jessie Eisenberg, who is just perfect for the role), sits at a crowded bar with his girlfriend discussing about a thousand things at once. she’s just trying to keep up with him and having a hard time of it, and he sits there insulting her over and over again without even realizing it. he’s moving so fast with his words and his train of thought that even he can’t follow it, or have the chance to think about what he’s saying and realize how it will sound. she ends the scene by breaking up with him and then delivering a hell of a punchline that shoots us off into the rest of the movie. it’s a great opening scene because it’s lengthy and dialogue filled (the exact opposite of any typical opening scene, save for Quentin Tarantino’s movies), and because we spend the entire scene sitting there with these characters we get to learn a lot about Zuckerberg in just a few minutes. we learn how he talks, how he thinks, and even what his personality is like. and then we move on.

Zuckerberg returns to his dorm room, cracks open a beer, and sits down to simultaneously blog about his ex-girlfriend and also create a website that ranks the faces of college girls against each other. all of this is cut with scenes of an elite final club of Harvard that busses extremely hot girls into their party who just want to hang out with the guys of this prestigious club. and of course the guys are all douche bags who make the girls get on tables, take off their clothes, and dance with them. the catch of all this is that mark’s site that he is creating, as all of this is going on at the party, is so amazing and intriguing that the guys at the party stop watching the girls and start going on his site instead. hard to believe when explained in words, or when you really think about it, but Fincher manages to make it convincing in this world that is all about technology and accessing new things online as quickly as possible.

it’s not long after this that we start seeing zuckerberg in the trials. he has two hearings going on at the same time, and they are constantly intercut with each other. that might seem confusing, but this movie finds a way to make it easy to follow, by constantly making the opposing lawyer who is going against mark into the one who is asking the questions. and since each hearing has a different opposing lawyer, not to mention each hearing is in a room that looks completely different, it turns out to be very easy to follow.

The site that mark created on that evening when he left the bar after being dumped by his girlfriend, was called face mash, and it got so many hits that it ended up shutting down the harvard network at four in the morning. there are ramifications for this. mark faces a board hearing in which he insists on getting some recognition from the board for pointing out the flaws in their security system. he ends up suspended from classes for six months. when he does return, notes are sent his way by other students who are angry with him for putting them on the site. everything mark wanted to do with the site, has fallen flat on it’s face. he was hoping the site would make him popular, and instead it made he and his buddy, Eduardo, hated by every girl on campus. but it did bring him to the attention of the Winklevas twins who have an idea of their own.

They bring him the idea of a website called the Harvard connection which is all about exclusivity. their site might not be clearly defined (is it a dating site for Harvard girls who want to get with Harvard guys?), but the one idea they do give mark that he runs with is exclusivity. you have to be invited on, or you have to be accepted as a friend by someone just to get passed your own page. mark takes that idea to Eduardo, at a Caribbean party, where he makes his friend step outside into the freezing cold, just so that he can explain the idea to him in an environment where he can be heard. Eduardo’s contribution will be money. he’s the cfo. and mark will supply the ideas and the algorithms to construct the site. and just like that, facebook is born.

The movie takes us into the sudden popularity of the site and why each step had to be put in place in just the right way. all of these ideas come out in the dialogue, so there’s a lot to listen to here, and to listen carefully. for example, it had to start by Eduardo emailing the site to everybody at the final club he is trying to get into, who’s email address he has, because if mark and his friends just emailed each other about it, it would just bounce around the dorky circle. and one step at a time. facebook becomes huge. after doing well at Harvard, the boys open it to other colleges in the area, and then to California. that brings in Justin Timberlake as Sean Parker, the founder of Napster and the guy who knows how to take this from a million dollar idea to a billion dollar idea.

Parker is a second half of the movie character, and he’s the guy that makes Facebook the monster success it is. Eduardo wants to open it to advertisers just to get money back, but parker has other ideas. investors. The two of them represent different points of view, and they clash with each other until one of them has to go. That’s what makes the second half of the movie so intense. The betrayal. The Social Network is a movie that has it all. It has the story of achievement, popularity, friendship, and the price that success comes with. The character are young students on the cutting edge technology and the future. These are well-off college kids at a prestigious university, but the character are only a part of what makes this movie so great. The lighting and music and all around atmosphere are spot on as well. With Aaron Sorkin writing, David Fincher directing, and Trent Reznor on the music, this is a dream team combination. And it definitely pays off to give us a pretty incredible film.