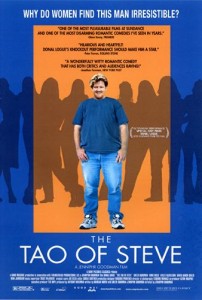 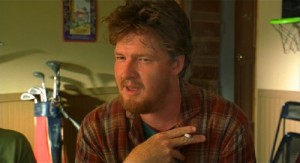 A moderately charming and interesting movie that starts out with a creative premise, but then gets pretty routine as it goes on.

The Tao Of Steve is a movie built on a very thin, yet somewhat interesting premise. the movie is about a fat guy, named dex, who actually get girls because of a strict set of rules that he uses to play the game. the rules include being desireless and also retreating. outside of those rules, and dex teaching them to one of his friends, this turns out to be a pretty routine romantic comedy. dex has the girl that he’s infatuated with, and he has about a week or two to win her over before she leaves town. there are a couple of interesting curve balls thrown in every now and again, such as that dex and this girl once knew each other and have some history together, but ultimately it ends up feeling very familiar and predictable.

The Tao Of Steve is a movie with a very simple and yet interesting premise. it’s the movie about a fat guy who gets girls simply because of his approach and theory behind the art of the pickup. this guy, dex (donal logue), reads philosophy on his free time and studies it like the bible, trying to find ways to apply it to his life. he talks about the theories of famous philosophers on a regular basis while spending his time relaxing and hanging out with his friends.

dex is one of those bachelors like seth rogen’s character in knocked up, who lives in a house with a bunch of other guys, all of them bachelors. do guys like this really exist? i suppose the stereotype is meant to show off the main character as the ultimate slacker, living a sort of fraternity lifestyle, only as an adult. here in this movie, dex is a kindergarten teacher by day and a frisbee player by afternoon.

at the start of the movie, we are with dex as he has an affair with a married woman. this is beth, a beautiful girl who likes dex because of his personality and relaxed state of mind. beth has no problem with cheating on her husband, and here at the beginning of the film, dex doesn’t really mind what they are doing either. this is more of the same for him, taking what he can get and never looking back.

at a highschool reunion, dex keeps talking about how fat he got and how nobody recognizes him. apparently he used to be the cool kid in the school and is now more of the overweight burnout. the reunion isn’t a total loss, however, because dex meet syd, the woman who is staying for a few weeks with his good friend, rick, and his wife. syd remembers dex, only he can’t remember her at all.

as it happens, dex and syd are going to be seeing a lot more of each other. that’s because the two of them are both borrowing the car of rick for the week, so long as sd is staying over there. after that, he plans are to go back to new york. dex and syd decide to split the car democratically and that really turns into her picking him up after work and giving him a ride home every day. one day she even comes into his kindergarten classroom and participates in an activity with the kids.

there are three storylines that are really going on with dex, all at the same time, in this movie. the first, and biggest storyline is with syd, the girl who dex becomes infatuated with. the next storyline is with beth, who dex slowly starts to realize he needs to cut it off with. syd definitely helps him to figure that one out. and then there’s the story of dave, the fool of the group of dex’s friends. dave is the guy who dex kind of takes under his wing throughout the course of the film.

dave is basically an excuse for this movie to have dex spew philosophy and explain his art of picking up chicks. he teaches dave everything, one step at a time. it all starts with the first rule, to eliminate your desire. we see dex practice this by going out with a girl who wants to get busy with him, and watching dex turn her down. the idea here is that this kind of mental game ends up making the girl want him even more.

there are only three rules to being a “steve,” as dex and his friends call it. they talk about how all the cool guys in popular culture are steves, such as steve mcqueen. the opposite of a steve is a stew. dave is a stew. the rules that dex teaches dave are be desireless, do something excellent in the girl’s presence, and then retreat. put another way, the characters say it as, “be desireless, be excellent, be gone.” these are interesting ideas, but it is also worth noting that rule one and three are pretty similar. basically people want what they can’t have and so if you play hard to get, you are more likely to end up getting what you want.

the movie itself is just okay. the premise is pretty thin and it doesn’t really carry the film all that far. dex continues to court syd and to be the disgusting guy she can’t stand until one day the become an item. it’s the oldest story in the book. enemies become lovers. this would have been a lot more fun if dex had to work harder, like if syd wasn’t conveniently staying with dex’s friend for a week, or they didn’t happen to be sharing the same car.

still, there’s a cool secret that comes out in the second half about something that went on between dex and syd in the past, and it has a very nice reveal. if the side plots were a little stronger, it wouldn’t matter all that much that the main storyline, between dex and syd was full of cliches. but the side plots are both completely one-noted. dave is a joke of a character, always smiling and acting like a fool. the story of dex’s affair doesn’t seem to have any real substance. so in the end, we are left with just the story of dex and syd. it’s the biggest story of the group and luckily it’s the best one of them all. the movie is predictable and routine, but still it tries to be creative with it’s premise and deserves credit for making a pretty nice attempt.