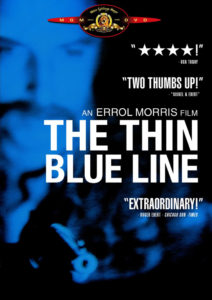 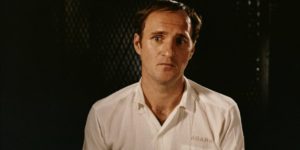 An incredibly interesting documentary about a murder and wrongfully convicted man, and the system that wanted to put him away.

This is a documentary about a man who was wrongfully accused of a murder and given a sentencing of the death penalty. The film chronicles the reasons and ways that he was falsely accused, but he’d majes it so interesting is that the deeper we get into it, the more we see how obvious it was that this man, Adams, didn’t do it. During the time of the investigation, the detectives had all the evidence in the would to support the claim that it was another man, Harris, who did the murder. Only Harris had two things that Adams didn’t. He had allibis who would lie for him about his whereabouts that night, and he had an age that put him out of qualification for the death penalty. Adams fit the right age, and so the state of Texas decided to make an example of him. This movie chronicles that entire situation. It’s a fascinating story, and the documentary really captures it well.

The Thin Blue Line is the most famous documentary by filmmaker Erol Morris. This is the movie that made Morris a name in Hollywood,(he is probably the best known documentary filmmaker, and has been for a while now.) It’s the movie of a man who was wrongfully convicted of murder, in a situation that seems so obvious, it’s crazy to think it even happened. And sure, we’ve seen plenty of wrongfully convicted movies before, but this one is pretty unique. What makes this one so interesting, is that the police actually had the guy who did the murder in custody and chose not to pursue his conviction. This was because he was too young for the electric chair and the police wanted someone who was eligible for it to go down for the murder.

The man who was convicted and sentenced to death in Dallas, Texas, was Randall Adams. He was on his way home from his first day of work at a new job when his car ran out of fuel. The man who picked him up on the side of the road was David Harris. Adams was 28 years old. Harris was only 16. The movie makes the case that in Texas, because they have the death penalty, the state wants to actually use it. Since a 16 year old can not be sentenced to death, and a 28 year old can, the police want after Adams and not Harris.

The movie takes the time to interview both men. And what comes of that is Harris, sitting in prison where he resides now, confessing completely to the murder. He holds nothing back, explaining that he did indeed point the police in the direction of Adams to get them off his back. He was 16 and he didn’t want to go to prison. But poor Adams, in his interviews, can’t even fathom how this could have happen d to him. He’s the guy who didn’t lie. While Harris made up all these witnesses to corroborate where he was that night, Adams told the truth and had nobody to verify his whereabouts. It cost him dearly.

Aside from the interviews, the movie features numerous reenactments. This is one area that differentiates this documentary from most others. It isn’t often that you see actors playing the parts of the characters in a documentary film. But this one shows us what happened on the night of the murder, from multiple angles. All of this raises as many questions as it does supply answers, and most of these questions are about the female cop, (the partner,) and what her role in the shooting was.

After committing the murder on that fateful night in Dallas, Harris went on to tell friends about what he had done. The police got wind of this, hearing the stories about this guy who showed up at a bar ranting and raving about shooting a cop, and they turned their backs on it. It’s one more thing that makes this whole story so crazy.  The only thing they didn’t have was Harris coming into the station and confessing to them, himself. But they certainly had enough to go on. Except for one thing, the age of the accused.

To make matters worse, the defense attorney was not allowed to present most of his evidence to the jury. This includes all sorts of evidence against Harris. He wasn’t allowed to talk about the confessions or let the jury know about this other suspect. Instead, all he was allowed to do was talk about his own client, Adams, and why he thought Adams didn’t do it. And to the jury, here was a drifter from out of town who just showed up for his first day of work, was in the vicinity of a murder and had no alibi. He was a non-Texan in a red state that loved guns and police. And it was a police officer that was murdered. The jury saw this as a situation to make an example of the accused.

After this movie was made, the story goes that this film was so powerful and clear, that it actually led to the reexamining of Adams’ case. And Adams, who was still in prison, on death row, at the time, was now found innocent and set free. Basically he was just rotting away somewhere and everyone had kind of forgotten about him, and this movie brought all of that to light. So not only did it cause the mans sentencing to be reversed, but it also saved his life. Unfortunately, because the movie was made before this decision, none of this appears in the film. But it’s certaibky part of why this movie is so famous. It’s kind of like the story or legend behind the movie. You almost need a documentary about this documentary.

There’s a lot to like about this movie. Like The Central Park Five, another fantastic documentary about people who were wrongfully accused of something and sentenced to years in prison, this movie explores what that does to a person. And it also explores all of the circumstances involved with the case. One of the most interesting of these, is the story of  the female cop. She was the partner of the officer who was murdered, and she was there at the scene, but exactly what her role was is unknown. The womsn claims she was out of the car, backing her partner up, but the evidence would suggest she stayed in the car finishing her meal.

The reason why this matters is because perhaps if she was out of the car, she would have gotten a better look at Harris. She would have been able to see that the man they wanted was not Adams. And maybe Harris wouldn’t have gotten away. Maybe he wouldn’t have even opened fire on the police if there were two of them instead of one. Clearly this was a guy who cared about his fate and well-being, since he lied about Adams just to get out of doing time himself. So the female officer’s role in the case does make a difference, and in s number of ways might have helped to avoid this entire mess.

The Thin Blue Line is a great documentary because of the story it tells, and how well that story is presented. Since it really is just one story, stretched out for the running time length of a feature film, at times the movie does start to feel a little thin. After all, we know the whole story of the events that happened within the first ten minutes. The rest of the movie is about the interviews, re-enactment, and shedding more light on what we already know. It’s incredibky interesting, but towards the end, it does start to feel like there’s nothing new to say. That’s the orange born woman th telling a documentary story about a single event. It’s a difficult task and this movie does about as good a job as can be done with it.